“Beneath the Flesh” by Andy Smillie (Black Library) 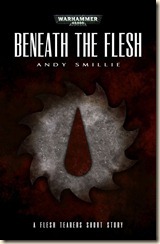 The Flesh Tearers descend upon an Imperial world to retrieve gene-seed from fallen brothers. Death haunts the shadows, as does the spectre of the Chapter’s curse, the Black Rage.

This novella was originally collected across two issues of Black Library’s monthly Hammer & Bolter eBooks. As someone who much prefers getting the whole story whenever possible, I decided to wait for the complete version, and I’m rather glad that I did. This is a brisk, brutal slice of Warhammer 40,000 fiction, sure to please fans of the franchise and also conflict-heavy military sci-fi. This is a very good, well-constructed and well-written novella, and I really enjoyed reading it.

A squad of Flesh Tearers – a successor Astartes chapter of the Blood Angels – has been dispatched to a remote outpost to ascertain what became of some of their brother Astartes stationed there. No communication has been received for a long while, and the Chapter leaders want answers. Upon their arrival, the squad senses the hand of the Archenemy may have been involved, and they set to securing the outpost by all means necessary. Only, things may not be as they first appear…

It doesn’t take long before things kick off, and we are quickly introduced to the Flesh Tearers’ style of warfare. It’s pretty savage, sharing more with the traitorous World Eaters legion than any of the noble, loyal Astartes – perhaps, at a stretch, they are close to the Space Wolves, who are also quite… uh, enthusiastic when it comes to waging war. But the Flesh Tearers are particularly brutal and single-focused when it comes to combat, and they operate constantly under the threat of the Black Rage – a genetic anomaly unique to those in and successors to the Blood Angels. Their modus operandi is to charge ahead into battle, to allow their prowess with the blade and bolter to win the day. As one member of the team, Nisroc, grumbles at one point:

“To be a Flesh Tearer was to be at the vanguard of the assault, to be elbow-deep in the enemy’s bloody remains, not holding the rear like some Imperial Fist strategist.”

The battle scenes are gruesome and brutally one-sided, as well as deftly-rendered – we get a good sense of the Flesh Tearers’ ferocity, but also their inner struggle against the ever-encroaching Rage. Nevertheless, and in spite of their attempts to maintain their composure, the story is one of near-relentless action. The Flesh Tearers certainly live up to their name – they are utterly ruthless when at war. The word “viscera” pops up an awful lot to describe the aftermath of skirmishes. They are not at all precious about using fallen brothers’ equipment – and even bodies in one instance – if it helps them to kill their enemies.

About a third of the way into the story, I had an inkling of how it would end, and I was partially right – I won’t spoil it, of course, but I really liked the narrative device Smillie used at the end to give us an idea of the truth of what happened at the base.

Smillie’s writing is brisk and tight, and he does a great job of fleshing out the characters (sorry, couldn’t resist the pun), and making them more than just killing machines. I blitzed through the novella, and it’s one of the best, shorter Warhammer 40,000 stories I’ve read in a long time (it certainly matches the quality of Horus Heresy short stories in quality).

This is a very pacey, action-filled sci-fi story, filled with a spectacular amount of bloody violence for such a short piece. The carnage is well-balanced by a nuanced look at the Astartes’ inner struggle with their genetic flaw. It is, therefore, very highly recommended for all fans of the Warhammer 40,000 setting, and also for anyone looking for a short, sharp action-heavy diversion. I really enjoyed this.