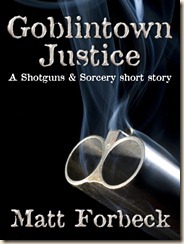 Ex-adventurer Max Gibson knows he’s found trouble when he stumbles out of his favourite tavern and into a murder scene, but when he realizes that both the victim and the blood-spattered orc kneeling over her are old friends of his, it gets far worse.

Arrested as an accomplice to the crime, Gibson must work fast to find out what really happened and clear his name before his still-living friend pays the ultimate price.

Set in one of Forbeck’s new fantasy settings, this is a short, sharp, fun blast of fantasy intrigue, and a drive-by introduction to Dragon City, its denizens and society.

The Shotguns & Sorcery setting is a melange of fantasy standards. Dragon City is a real melting pot of fantasy creatures – Elves seem to be the top of the food chain, then humans, then orcs. The city is surrounded by a curtain wall, built to keep out the horde of zombies that are attempting to get in and eat the population (one assumes).

The story has a bit of a sudden ending, but one that speaks volumes about Dragon City’s social and judicial reality. Life in this city is tough, dirty, and potentially deadly. And I really enjoyed reading about it. The story’s not long enough to properly flesh it out, but there are the beginnings of a playful, entertaining fantasy world here, and I would definitely be interested in reading more fiction – short stories or novel-length – set in and around Dragon City.

Max is a good character, morally ambiguous and rather cynical, and a potentially interesting past. The interactions between the characters feels natural and we get a good sense of the social strata of the population, as well as the tensions between the races. It’s a pity this wasn’t longer.

Goblintown Justice is good fun and well-written, and is available from Amazon UK & US.

The setting will be used in a trilogy of novels Forbeck’s writing as part of his ambitious “12 for ’12” project. You can learn more about his Shotguns & Sorcery Kickstarter, here.

The series’ rather cool logo