“The Untamed” & “The Portent” (Stranger Comics)

I reviewed the first issue of The Untamed a little while ago, and have been looking forward to reading more in the series. I think they went on a short hiatus, but finally the next two issues are available! The first is still available as a free read over on Graphicly, and I would certainly recommend it. This week, I got my hands on the next two issues of the series, as well as the first issue in another new title from Stranger: The Portent. 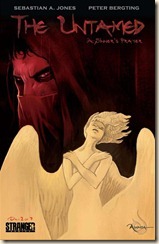 A Stranger has returned to Oasis. A deal has been made. Seven souls for seven days. Now, he is holed up in a tavern cared for by a girl not old enough to remember his past. She radiates an innocence that defies his thirst for vengeance. But there is another soul to collect, and he shall find it within the brutal and blood soaked underbelly of the town: The Pit Fight Arena!

Love versus lust. Can a man tell the difference? Two souls have been claimed, but Stranger’s focus for killing is distracted by a beautiful woman from his past. He is drawn to her without knowing why, trapped in a game he cannot win. With his guard down, he is nearly caught when he discovers the man responsible for his family’s death – Phylax, the leader of the Kraven – and Stranger’s older brother. 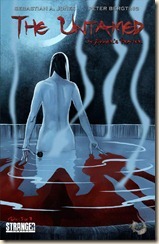 These two issues cover the second and third days (of seven) of the stranger’s quest. They give us more information on who the stranger is, but only enough to keep our curiosity piqued – there are hints and allusion, but nothing clear or definitive. Through the stranger’s actions, we also have a guide to this world, and it’s a pretty rich and interesting fantasy setting – there are classic fantasy races (dwarves, elves, some kind of orc-like creature), and so forth, but the aesthetic and mystery set it apart.

The writing is very good – full of mystery and teasing nuggets of information. It’s quite gothic, too, and draws on classic themes of betrayal, justice, and vengeance from beyond the grave. I really like the series, and I think Jones has done a great job of crafting a well-paced story of suspense, and populated it with some familiar-yet-distinct characters.

The artwork is pretty great – very atmospheric, and it matches the tone of the story very well. There are some wonderful full-page pieces, too. Bergting is a very talented artist, and I’m certainly interested in reading/seeing more of his work.

The Untamed is a dark, gothic fantasy tale, one that I am eager to read more of. Definitely recommended. 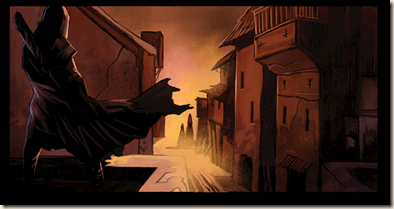 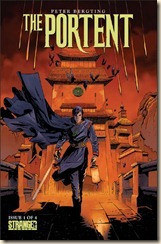 “Between Heaven and Earth exists no place where there isn’t also good and evil.”

Milo arrives in a remote valley only to find it ridden with the spirits of the undead. The demon Guishen is on the rise and soon Milo finds himself entangled in a web of deceit, catapulted into action as the saviour of the world. He accepts the burden for all the wrong reasons: to be a hero – to get the girl.

This new series by Peter Bergting, the artist who also works on The Untamed, is set in a stark and beautiful world, somewhere between heaven and hell. The aesthetic is inspired by medieval Asia, and it contains some haunting supernatural qualities that can also be found in a few Asian mythology and fantasy/horror stories. I really liked this, much more than I was expecting. It also features some classic Lord of the Rings-style elements, which are nicely altered to suit the atmosphere and style Bergting brings to the comic.

The first issue is very much just setting the scene and tone for what is to come, I believe, so it’s not overly action-packed. Milo has arrived in this land, and despite a violent altercation with some of the diminutive natives, has arrived at the deserted city, now home of a small coven of seers. Lin, the youngest of the seers, and not fully accepted as one of them, pushes her belief that Milo is a saviour sent by the gods, while he refuses to believe a man’s fate is predetermined or anything but his own to decide.

This should appeal to all fans of fantasy comics, as well as Manga and Anime. That being said, this isn’t a Westerner attempting to produce a Manga: the Asian feel is just in the aesthetic and a couple of inspirations – the story remains distinctly Western. The dialogue is sparse, but Bergting is able to infuse his artwork with a wonderful amount of story, showing us clearly what is going on, without need for some of the more standard exposition-dialogue or narrative that can feature prominently in some comics.

I really liked this. Highly recommended, if you want something a little different.

Stranger Comics have struck a partnership deal with Graphicly, it would seem, and all three of these comics are available to purchase there – just click on the links: The Untamed #2, #3, The Portent #1