Bucky steps out into his own series

He’s been Bucky and Captain America – now, James Barnes returns to the role of the Winter Soldier!

They’re the super-spies of the Marvel Universe – and when ex-Russian sleeper agents awaken, Bucky and the Black Widow must go on the hunt for men trained by the Winter Soldier himself. But when the trail leads to Latveria, Bucky comes face-to-face with Dr. Doom!

Can Bucky and the Widow prevent war with Latveria? Can Bucky stop the sleepers he trained?

I’ve really enjoyed the books in Ed Brubaker’s first run on Captain America (I’ve read the first half of that volume, at the time of writing this). In fact, that series, recommended to me by Myke Cole, bears a lot of responsibility for me reading more Marvel titles, after I was disappointed with my re-entry in Summer 2011. I particularly liked the way Brubaker brought back James “Bucky” Barnes into the Marvel universe. Bucky is now the Winter Soldier, a clandestine operative working alongside with Black Widow and reporting to Nick Fury. He is also attempting to atone for his past as a Soviet spy and assassin. This is quite a different, superb Marvel comic.

I’ve written reviews of the first three issues already (here and here), so I won’t delve too much into those. 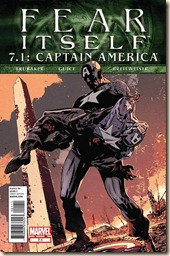 The book opens up with an issue from the epic Marvel Fear Itself event, which was one of the many recent big Events (alongside Civil War, Siege, and the recently-completed Avengers vs. X-Men). This issue explains how Bucky relinquished the role of Captain America, so Steve Rogers could come back (this is set after the headline-grabbing series story-arc, “The Death of Captain America”, which I have still not read). The rest of the book builds nicely on this foundation and highlights Brubaker’s exceptional writing skills and his comfort playing in the Captain America sandbox.

Winter Soldier takes the superhero genre and mashes it together with the (post-)Cold War espionage genre, bringing us a gripping and action-packed story, complete with sleeper agents, assassins, delicate geopolitical negotiations and infiltrations. Bucky was formerly Captain America’s side-kick, during the Second World War. At some point during the earlier Captain America timeline, he was killed and revived by the Soviets, who turned him into their super spy. [As I mentioned in the first Winter Soldier review, that’s a whole bunch of amusing comic-book stereotypes and tropes, but just go with it: it’s great fun, and Brubaker really makes it work. And, as I’ll mention below, these aren’t the craziest elements to the story…]

Captain America, over the course of the “Winter Soldier” story-arc, managed to return Bucky’s memories. Ever since, he has been working to atone for his actions, fighting first as the Winter Soldier, then as Captain America, and now back to being Winter Soldier. He is teamed up (and romantically involved) with Black Widow, and together they are chasing after Soviet sleeper super-agents still in America, forgotten by their former masters but not by the various super-villains operating around the world. The activation codes for these sleepers have made their way onto the black market, sold to a disreputable miscreant, and they are being activated one-by-one, sent out on assassination missions.

The first two issues give us a good introduction to the characters, as well as some initial hints as to where the story may be going in the future. As I mentioned in my original review for issue three, we get a bit of Third Issue Exposition Syndrome, which I thought necessary at the time – a belief that has only been reinforced the more I read, but as a collected book it works very well and I didn’t notice any lull in the storytelling. The final two chapters of the book deal with all of the Soviet Sleepers bar one – that chestnut, it seems, will be left for later on in the series. Oh, and Bucky and Black Widow also engage an America-hating, gatling-cannon-toting, talking Gorilla. Who’s kind of badass. And also knows how to operate a jetpack…

The artwork throughout this book is excellent – it’s dark and atmospheric, gloomy and gritty. It does a good job of taking the “Winter” from the title as inspiration, offering up a colder style that favors blues and grey-tinged coloring and deep shadows. It’s very eye-catching, and I really enjoy it. True, there are some panels that are a little too gritty, in that the artwork comes across as rather scratchy and unclear, or maybe even a little sloppy.

That minor niggle aside, this is a great book; one I would highly recommend to all fans of Captain America and the more adult Marvel titles. I really can’t wait for book two.