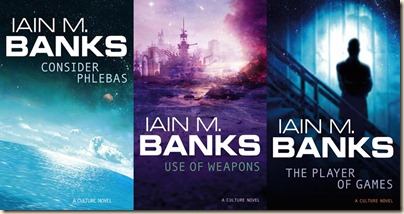 Today, Orbit Books (and Civilian Reader and many others) are celebrating 25 years of Iain M. Banks’s Culture series! The series started with CONSIDER PHLEBAS in 1987, and continues this year with THE HYDROGEN SONATA, the New York Times bestseller that Orbit published last month. 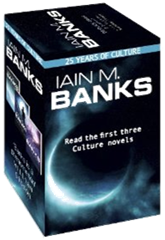 To help others celebrate this milestone, I am happy to offer a copy of the Culture boxed set, which is also out this month, to one lucky Civilian Reader… uh, reader.

The boxset includes CONSIDER PHLEBAS, PLAYER OF GAMES, and USE OF WEAPONS

To be in with a chance to get your mitts on this boxset, all you have to do is leave a comment, below (please include a way of getting in touch – a Twitter handle or anti-spam email), or emailing me at…

I’ll pick the winner (using some form of random-number generator or I’ll find some dice from somewhere) on Monday, December 3rd. 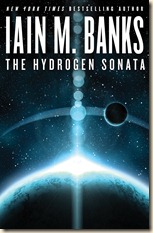 In the meantime, check out the synopsis for The Hydrogen Sonata:

The Scavenger species are circling. It is, truly, the End Days for the Gzilt civilization.

An ancient people, organized on military principles and yet almost perversely peaceful, the Gzilt helped set up the Culture ten thousand years earlier and were very nearly one of its founding societies, deciding not to join only at the last moment. Now they’ve made the collective decision to follow the well-trodden path of millions of other civilizations; they are going to Sublime, elevating themselves to a new and almost infinitely more rich and complex existence.

Amid preparations though, the Regimental High Command is destroyed. Lieutenant Commander (reserve) Vyr Cossont appears to have been involved, and she is now wanted — dead, not alive. Aided only by an ancient, reconditioned android and a suspicious Culture avatar, Cossont must complete her last mission given to her by the High Command. She must find the oldest person in the Culture, a man over nine thousand years old, who might have some idea what really happened all that time ago. It seems that the final days of the Gzilt civilization are likely to prove its most perilous.

This giveaway is open to all.