Upcoming: Neil Gaiman’s “Ocean at the End of the Lane”

Shamelessly pinched from the great A Dribble of Ink, I thought I’d share what is, at least, nearing-completion cover art for Neil Gaiman’s next novel, The Ocean at the End of the Lane. I think it’s a pretty amazing image: 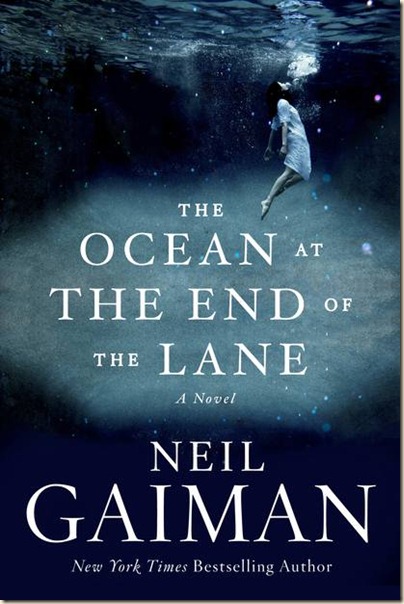 Now, I have a confession to make: I haven’t read a lot of Gaiman’s work. I’ve read and enjoyed Good Omens (written with Terry Pratchett) and American Gods, which I thought was amazing. However, I’ve just never got around to reading any of his other novels or graphic novels – and I really want to read Sandman…

Anyway, here’s the publisher’s synopsis for the novel, which I shamelessly pinched from Gaiman’s LiveJournal (which is a reliably interesting read, too, by the way):

The Ocean At The End of the Lane is a novel about memory and magic and survival, about the power of stories and the darkness inside each of us.

It began for our narrator forty years ago when he was seven: the lodger stole the family's car and committed suicide in it, stirring up ancient powers best left undisturbed. Creatures from beyond the world are on the loose, and it will take everything our narrator has just to stay alive: there is primal horror here, and a menace unleashed -- within his family, and from the forces that have gathered to destroy it.

His only defense is three women, on a ramshackle farm at the end of the lane. The youngest of them claims that her duckpond is an ocean. The oldest can remember the Big Bang.

The Ocean at the End of the Lane is a fable that reshapes modern fantasy: moving, terrifying and elegiac -- as pure as a dream, as delicate as a butterfly's wing, as dangerous as a knife in the dark.

Which sounds suitably strange and cool. I’ll hopefully get this read and reviewed for the site, but I’m going to stop making promises like that because a) I’m finding myself with less time for reading, and b) I seem to be stuck in a never-ending cycle of book-funk that rarely lets me settle on a book that I’ve been eagerly waiting for… Maybe I’m just going nuts…?

Posted by Civilian Reader at 5:45 AM

Email ThisBlogThis!Share to TwitterShare to FacebookShare to Pinterest
Labels: 2013, A Dribble of Ink, Anticipated, Art, Cover, Harper Collins, Neil Gaiman, News, Ocean at the End of the Lane, Upcoming