“The Racketeer” by John Grisham (Doubleday) 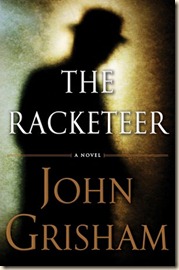 Given their importance, the controversies that often surround their work, and the violent people they sometimes confront, it is remarkable that in the history of the United States, only four active federal judges have been murdered. Judge Raymond Fawcett has just become number five.

Who is the Racketeer? And what does he have to do with the judge’s untimely demise? His name, for the moment, is Malcolm Bannister. Job status? Former attorney. Current residence? The Federal Prison Camp near Frostburg, Maryland. On paper, Malcolm’s situation isn’t looking too good these days, but he’s got an ace up his sleeve. He knows who killed Judge Fawcett, and he knows why. The judge’s body was found in his remote lakeside cabin. There was no forced entry, no struggle, just two dead bodies: Judge Fawcett and his young secretary. And one large, state-of-the-art, extremely secure safe, opened and emptied.

What was in the safe? The FBI want to know. Bannister would love to tell them. But everything has a price…

The Racketeer is another good novel from Grisham, an author whose work has rarely disappointed me. The novel plays to some of Grisham’s strengths – particularly his commentary on the American legal and penal systems, but it is not without its minor flaws. It was enjoyable, certainly, and definitely well-written and tightly-plotted. That being said, there was a definite turning point around the middle when I went from loving the novel, to slight and momentary confusion, before coming back around to enjoying it. I am, therefore, slightly conflicted about the book.

The novel opens with some brilliant chapters laying out the scene and also introducing us to the main character, his past and his current predicament. Bannister is in jail because he was caught in an indiscriminately-wide RICO net, having unwittingly been duped into laundering money for a crook. He is halfway through serving a ten-year sentence at a minimum security “camp” – no wall, fences, and a fair amount of freedom. He’s itching to get out, and has been harboring a grudge against and growing resentment towards the Federal Government and all of its agencies and employees. He’s not violent. He’s not acting out – in fact, he’s the model of an inmate, just biding his time and marking the days.

But then an opportunity arises, as he sketches out a deal under Rule 35 of the US justice/penal code, which states that an inmate can have time shaved off his or her sentence, or even go free, if they help solve another crime. Bannister is insistent that he knows who killed the judge, but he’s equally determined to get as much out of the Government and FBI as possible before he helps them out even a little bit.

The first half of the novel is really great. As in The Brethren (which was my first Grisham) and The Confession, the author is firing on all cylinders when critiquing the law, prison reality and the injustice of the Federal justice system. In particular, the polar-opposite realities that are most likely the case for white and black inmates in prison, and especially white-collar crime, minimum-security facilities:

“For the white-collar guys, the punishment is humiliation and the loss of status, standing, a lifestyle. For the black guys, life in a camp is safer than where they came from and where they’re going. Their punishment is another notch on their criminal records, another step in becoming career felons.”

In one chapter, Bannister reminisces about his harrowing journey from court room to prison: the circuitous, torturous journey that was ridiculously complicated, expensive, and basically pointless. It’s just one of many serious indictments of the federal and state-level criminal justice system, and comes complete with grand-standing politicians, ambitious feds, and bullish FBI agents. Some, including myself, will think Grisham goes a little too far in his portrayal of the FBI agents – there are times, especially later in the novel, when they come across as foolish, unprofessional bullies. While I don’t doubt there are some who will be like that, I think it’s a type that is painted a little too broadly on this canvas.

Bannister is an interesting character, and he’s also the only one who is really developed in the novel. Almost the entire novel is from his perspective, inside his head. At times he is cool and collected, while at others he’s paranoid in the extreme (somewhat understandable, given how he came to be incarcerated in the first place – but, again, sometimes he goes too far). We quickly get the impression that he’s working an angle of some kind, but it’s not until much later in the novel that we start to realize the scope of his plan. It’s quite implausible, really, and relies on way too many factors falling into place just right (something the character does, at least, have the good sense to recognize at one point).

It’s very difficult to talk about the things I felt didn’t work as well as I’d hoped, because they would require me to throw out a lot of spoilers. I had a hunch that something seriously fishy was going on quite early in the novel, but then around the half, perhaps two-thirds mark, I started to piece some of it together. Partly because things were a little telegraphed, but also because it was a little obvious. However, what really bothered me, was just how long it took to get some proper explanation of what was going on. This is really what led me to think that there were quite a few moments in the second half of the novel that felt like Bannister was an entirely different character, and that was a little jarring. He was, at times, an absolute ass-hole, even sadistic, which felt rather out of character given how much time is spent setting the scene at the beginning.

Needless to say, I can’t deny that I enjoyed reading the novel, and eagerly picked it up at every opportunity. It’s engaging and well-written. The niggles won’t allow me to say it’s among Grisham’s best novels, but even his lesser work is better than a hell of a lot of novels being published these days. 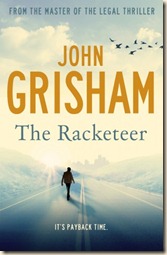 If you’re a fan of Grisham, this will probably suit your tastes. If you’re new to Grisham, I’d recommend starting with some of his earlier, better-known novels – The Firm, The Pelican Brief… actually, all the ones that were made into movies (they were chosen for a reason, after all). Grisham’s still among my favourite authors, and I can’t wait to read his next novel.

The Racketeer is out now in the United States, and will be published in the UK on November 8th 2012 (Hodder & Stoughton).

Posted by Civilian Reader at 1:52 AM