Pretty explanatory what this post is all about. Boom have really been able to keep a good position in the super-hero genre. With the end of both Irredeemable and Incorruptible (both my Mark Waid), I was worried I would miss out on alternative super-hero awesomeness. Thankfully, Si Spurrier came along with Extermination, which I can’t recommend highly enough. Dan Abnett and Andy Lanning brought us Hypernaturals, a good (if slightly uneven) sci-fi super-hero extravaganza. Sam Humphries stepped up with Higher Earth, a dimension-hopping mystery that shows a great deal of promise, but is also quite uneven at times. In addition to these, there’s also Fanboys vs. Zombies, which is usually just a lot of nerd fun, but this issue was a little lackluster, I thought.

And finally this week, the debut issue of much-anticipated and talked about (but sadly disappointing) Freelancers.

I don’t know why, but I think I was in a bad mood when I read most of these. Only Extermination really ignited my interest, although the others do have interesting stuff to offer. Hypernaturals is improving, though, after a bit of a lull. 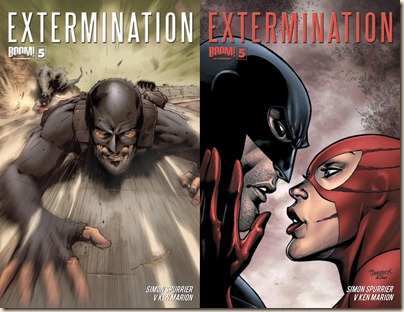 BRAND NEW ARC! PERFECT JUMPING-ON POINT FOR NEW READERS! Unlikely partners Nox and Red Reaper have survived the attacks of the deadly EDDA, traversed the post-apocalyptic landscape of the U.S., and formed a rag-tag alliance of former heroes and villains. Now…they plan to strike back.

Every new issue of Extermination is a good thing, and this series continues to entertain while offering some much-needed tongue-in-cheek commentary on comic books and their beloved tropes. Spurrier’s humour is fantastic, and the story remains very strong. After the previous issue, when our two main protagonists met up with another group of super-survivors, they have formulated a daring, pretty-much-insane plan to hijack an alien land-train on their quest to save and revive the world’s greatest, god-like super-hero (who, incidentally, is an asshole of epic proportions, and has a lot of bad history with Nox…). 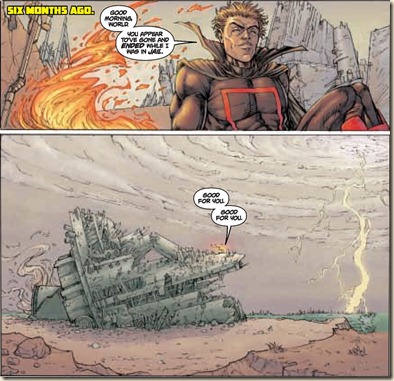 I particularly like the way Red Reaper keeps poking fun at Nox’s cliché statements and fighting talk. There’s a sense of deep fondness for the classic norms of comics throughout, and it is this that really helps elevate Extermination above its peers. 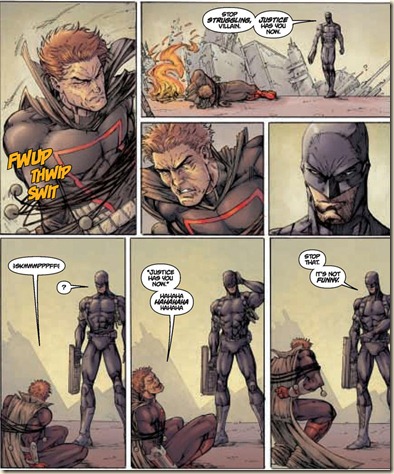 The artwork remains strong and really does the trick.

Highly recommended for all who love super-heroes and also those who are a little tired of them. If you tried The Boys and found it a little extreme, or not sci-fi enough, then Extermination will also be perfect for you. This is brilliant – the writing, artwork, humour, story, everything. It all just works. 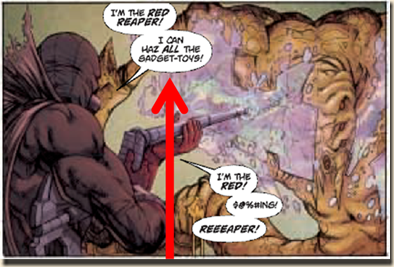 This. This is just one reason why Spurrier’s brilliant 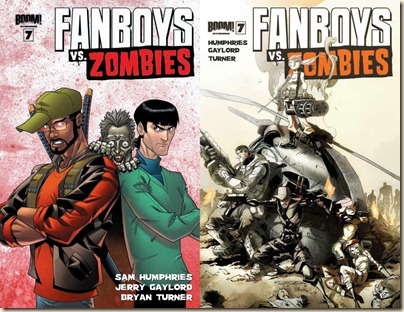 As San Diego literally crumbles around them, the Wrecking Crew discovers the shocking secret behind the zombie outbreak… The fanboy-favorite series continues, from writer Sam Humphries (Marvel’s ULTIMATES, HIGHER EARTH) and Jerry Gaylord! After last month’s shocking issue, even we don’t know what’s in store for the Wrecking Crew!

This issue wasn’t quite as good as some of the ones that have come before. It felt transitional (which is not uncommon, after all, in ongoing series), and the jokes felt just a tad forced. I’ll have to read this again when I have more issues collected, get a more general overview. A pity, as it was going so well, only to have this… pause, I suppose. There are some big moments late in the issue, which certainly suggest things may be going in a bit of a darker direction in the future – that bodes well, though, and I look forward to seeing what Humphries and Co. pull off. Money Talks. Val and Cassie are two women trying to make it in L.A…who just happened to grow up in a Kung Fu Orphanage, and now make their way in the ultra-competitive world of bounty hunting . They’ve watched each others’ backs since they could stand, and those bonds are tested daily as they navigate a city where loyalty usually only runs as deep as one’s bank account. Val and Cassie take the most dangerous jobs, and watch as others bask in the glory. But now, as their former mentor becomes L.A.’s most wanted fugitive, Val and Cassie will fight through L.A.’s glitziest and grimiest hoods as they learn just what sacrifices are necessary to make Hollywood dreams come true.

I’d heard a lot about this series before it was available for review, but I’d studiously avoided reading too much about it, as I’d already decided I was interested. Sadly, I was not very impressed. The story’s fine, the premise is interesting, but the execution left something to be desired. It felt simple, or at least simplistic. The quipping was fine, but there’s not a whole lot to differentiate this from any other buddy-style movie or storyline.

The issue also has a back-up story, “Tiny Fighters”, written by Matt Gagnon with art by Felipe Smith. This story was just irritating, and the artwork skirted the realms of race-stereotyping a little more than I’m comfortable with…

Sadly, this fell very short of my expectations. Not sure if I’ll be reading more of the series, but we’ll see. Maybe it will settle down and improve. #5 – BRAND-NEW ARC! GREAT JUMPING-ON POINT FOR NEW READERS! Find out more about the Higher Earth empire and its deadly assassins as Sam Humphries dives deep into the infinite mythos that has everyone talking. A can’t-miss issue for fans and a perfect place for new readers to get started!

#6 – With no one to trust, not even each other, Rex and Heidi must find a way to work together as the agents of Higher Earth come ever closer… Rex’s master plan begins to unfold as he and Heidi continue their arduous journey through a hundred different Earths

It’s an interesting decision, going way back in the story for the final chapter of the first arc – we go back to, effectively, the birth of Higher Earth (or, at least, the idea of Higher Earth), and discover how the conquest of the various Earths began. I enjoyed the story, artwork and writing.

Issue five is the final chapter of the newly-released first paperback collection, in case anyone’s been waiting for that.

I have no idea what issue #6’s cover is referring to – they don’t go underwater at all in the story… Anyway, this second issue takes us back to the present, as we re-join our heroes as they continue their fight against Higher Earth and its tyrannical ways. It wasn’t bad. I think the series is still interesting, and I’m eager to read what happens next. It’s a strange series, and as they give us more detail, it’s becoming even stranger, but it’s got some good content. 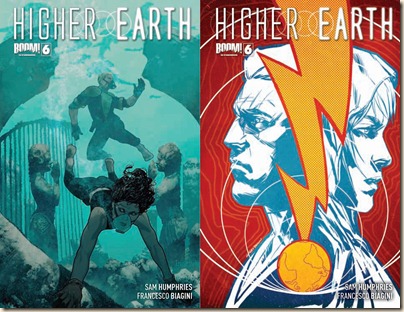 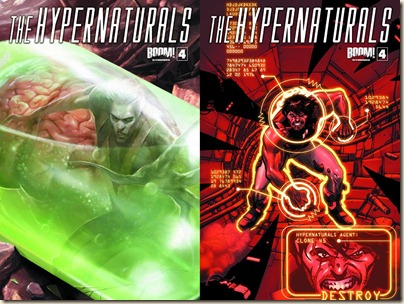 #4 – BRAND-NEW STORY ARC! PERFECT JUMPING-ON POINT FOR NEW READERS! Thinkwell, Bewilder and Clone 45 begin to discover just how deep Sublime’s scheming runs, as they discover the lone survivor of the cataclysmic event that seemingly wiped out the previous Hypernaturals team…

#5 – Dan Abnett and Andy Lanning continue the cosmic thrills that they were never allowed to do until now! With Sublime’s motivations in question, Thinkwell, Bewilder and Clone 45 must find a way to work with their greatest enemy if they’re going to face an even greater threat, one that might destroy the Quantinuum all together…

The fourth issue starts off with a flash-back to an early territorial war in the Belt region of the Quantinuum (about 19 years since it was formed). We get a little more explanation of what’s been going on in the past, and also some attention to a fellow called Chernovski, and how he came to have some incredible powers (he appears again in issue five).

As with some of the previous issues, the fourth is very busy. There’s a lot of explaining, a lot of handy info-bubbles and so forth. The info bubbles are actually used to an amusing, wry effect later in the issue, actually. I also liked that we learn more of how the Clone Hypernaturals draw their power and strength from past Clones – this was a very cool development.

The fifth moves the story along well, as the Hypernaturals continue their investigation, and Sublime’s storyline develops in an interesting and portentous manner. Things are going to get dicey for the Hypernaturals from here on out… As with other issues, it starts with a flashback, this time focusing on Thinkwell’s ‘origin’ as a Hypernatural, and the time he decided to give up the teachings of his planet (Nth), and join the team to learn as much as he could about the vast Quantinuum AI. 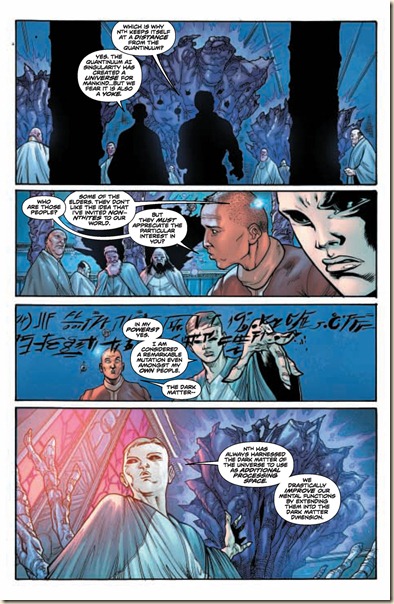 One of the strengths of the series is definitely Abentt & Lanning’s ability to create and realise unique characters. Thinkwell and Sublime are particularly interesting and original, and I really like the way they’ve been written and their powers woven into the story. 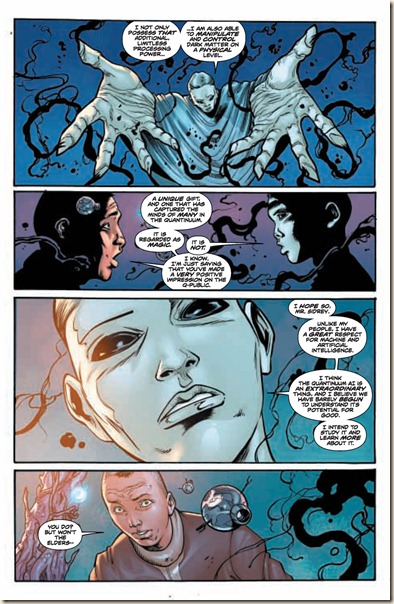 It’s still an interesting setting and story, and I liked the Silence of the Lambs-esque visit to the maximum-security mega-prison in #3 and #4. I’m not sure how this series will develop over time, but with each new issue we’re given ever-more detail on what Abnett & Lanning have created. This has the potential to be huge, and I think the writers are doing a great job of giving us new information each installment, but I worry that they’re spending too much time on the world-/setting-building, and not enough time on moving the story forward sufficiently? The fifth issue certainly addresses some of my concerns on this front, but it is something new readers should be aware of, before diving into the series.

The art team is great, and the cartoon-y quality to the panels is not at all bad – I think it matches the style and story very well, and this is, overall, a very well-put-together comic.

The writers are certainly good at providing cliff-hanger endings, which will likely always tease readers back for more, but there’s something about each issue that hasn’t quite fired up my enthusiasm to place this on the Must Read or Impatiently Anticipated pile just yet. Do I recommend it? Absolutely. Is it a must-read? Not quite yet, but the fifth issue definitely brought it closer to attaining that status. 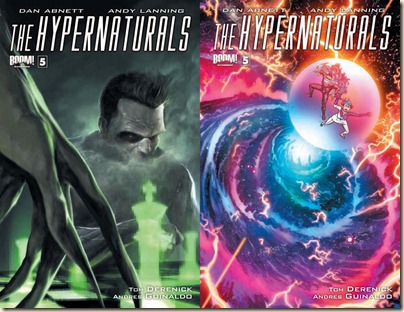 Posted by Civilian Reader at 10:14 PM