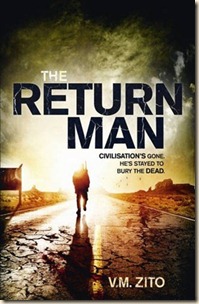 To celebrate the UK mass-market paperback release of V.M. Zito’s excellent post-apocalyptic zombie tale, Hodder has been running a number of giveaways. Including this one! I read the novel last year – and really enjoyed it – so to whet your appetite, here’s the synopsis:

In order to be in with a chance of winning one of FIVE copies of the novel, all you have to do is either…

This will be a relatively short giveaway, so I’ll be leaving this open for one week – until midnight, Thursday 15th November. This giveaway is UK ONLY. I’ll announce the winners, who will be picked at random, on here (in the comment thread and also in a new post, probably) shortly thereafter.

Sorry about that readers from elsewhere, but I’ll see what I can do about a worldwide or regional giveaway in the near future.