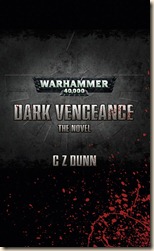 An introduction to the new game

The Dark Angels are among the foremost Space Marines, the First Legion of old. Devastated millennia ago by a dreadful schism, the Dark Angels are constantly on the hunt for the mysterious Fallen, former brothers who have turned from the light of the immortal God-Emperor and embraced the dread powers of Chaos.

Newly ordained Company Master Balthasar of the Dark Angels leads his forces to the world of Bane’s Landing, the resting place of the ancient and powerful Hellfire Stone, in pursuit of the Chaos Space Marines of the Crimson Slaughter. Kranon the Relentless, the evil lord of the Crimson Slaughter, seeks to use the stone to summon forth his daemonic masters and usher in an age of darkness. As the Dark Angels race to stop him, the scene is set for a mighty conflict between the loyal Balthasar and the traitor Kranon.

After finishing this novella, which is intended as an introduction to the new boxed game recently released by Games Workshop, there was a real risk that the review would end up shorter than the synopsis. It’s enjoyable, but also flawed as a work of general science fiction, which may bother some readers.

An an introduction to some of the characters in the new game (which I have not played and do not own), this is pretty good. Each chapter – of which there are many – is from a different perspective to the first. There are a number of characters, and due to the range of them, as well as the short length of the chapters in which they feature, we don’t really get to know many of them beyond a superficial level. This is not necessarily the fault of the author – if his brief was to purely introduce them to us, then he succeeds.

If you wanted a novella of the same or similar quality to Black Library’s other novellas and full-length novels, then you may be disappointed. If this had been twice as long, I think it could have really stood out.

The multiple perspectives, the multitude of characters, make Dark Vengeance feel like a series of vignettes were just stitched together. I think the cultist/Chaos chapters were the best, and they actually went a long way to showing readers just what Dunn is able to do. 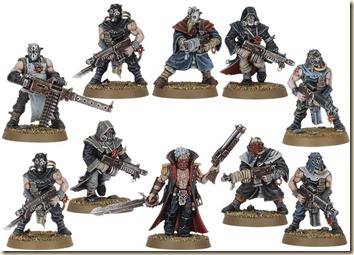 Cultists from the game

This made me wonder why there aren’t more novels that follow the rise of a cultist/Chaos leader, outside of the Horus Heresy series, instead of predominantly following Imperial or ‘good’ characters? Dunn is clearly very good at writing characters who have fallen from grace, so I’d certainly be interested in reading more, longer pieces by him.

The novella is not without surprises. We get some interesting insight into the character of the Dark Angels, as well as the cultists and Chaos warriors. 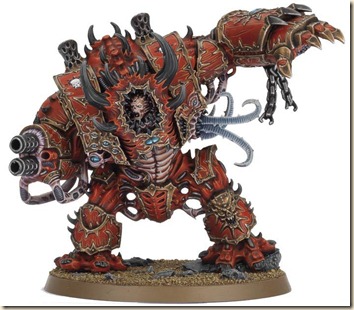 This is a Helbrute. He’s mad. Mad as a bag of pissed off cats…

The way the Interrogator-Chaplain gets his prisoner to answer one final question, when he seemed to have died, is… well, “brutal” comes close to describing it. I’ve never read that before, and it was very well done here.

So, I think this novella is probably more suited either to people who are thinking about buying the new game, or people who have bought the new game and want a little more back ground to the characters they will be controlling and fighting against.