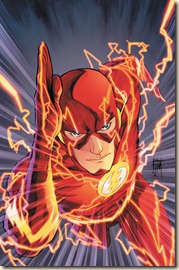 Struck by a bolt of lightning and doused in chemicals, Central City Police scientist Barry Allen was transformed into the fastest man alive. Tapping into the energy field called The Speed Force, he applies a tenacious sense of justice to protect and serve the world as The Flash!

The Flash knows he can’t be everywhere at once, but he has seemingly met his match when he faces new Super Villain, Mob Rule, who really can be everywhere at once! As Mob Rule wages a campaign of crime across Central City, including an electromagnetic blast that plunges the city into darkness, The Flash learns the the only way he can capture Mob Rule and save Central City is to learn how to make his brain function even faster than before – but as much as it helps him, it also comes with a steep price!

After reading the zero-issue of The Flash, I must say my interest in the character and series increased considerably. Up until that point, I’d been happy to just see him featured in Justice League (which is the same sentiment, I suppose, I had with regards to Green Lantern). What I read in #0, however, really intrigued me, and I particularly liked the art-style. So, I picked this book up as soon as it was available. I was not disappointed.

I’m not entirely sure what to write about this book. Despite really liking it, there’s not a whole lot that one could write without spoiling a lot of the story. Needless to say, we learn a fair bit about the Flash’s talents – portrayed in a particularly good scene, when he narrates a part of his learning experience and ends up saving an entire jumbo jet that had been plummeting towards earth. 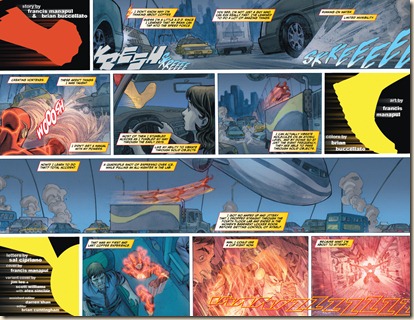 We meet Iris West, journalist and a little like a younger Lois Lane; Patty Spivot, a colleague of Barry’s, and a brilliant CSI. We also meet Mob Rule – a really interesting antagonist, and one that’s used well. Barry learns a new way in which the Speed Force can help his crime-fighting mission. There’s some stuff about wormholes that was a little surprising. Also, there are some panels near the end that feature talking gorillas... (This latter inclusion does not seem to be a new thing for The Flash, and is picked up again in issue #13.)

As with the zero-issue, the artwork is fantastic. Once again, I love the differences in style for the ‘present’ and ‘past’ – the softer palette and images for the flashbacks contrasted brilliantly with the more detailed and clean style of the present timeline. 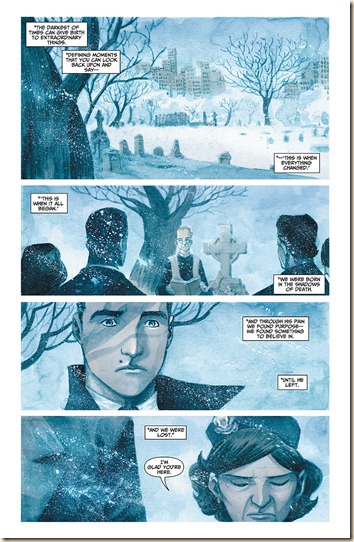 The book is not perfect, but it’s certainly a lot of fun, and I look forward to reading more of the series. I will, however, be waiting for the second collection, so it could be a while before it features again on here.

If you’re looking for a super-hero story that is a little lighter in tone, but still action-packed and well-written and –rendered, then The Flash should certainly suit your needs. Recommended. 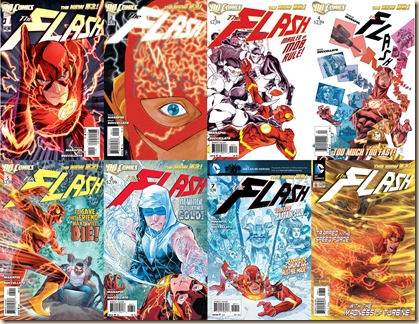 Posted by Civilian Reader at 6:24 PM