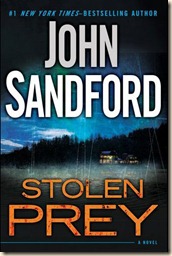 Lucas Davenport has seen many terrible murder scenes. This is one of the worst. In the small Minnesota town of Wayzata, an entire family has been killed — husband, wife, two daughters, dogs.

There’s something about the scene that pokes at Lucas’s cop instincts — it looks an awful lot like the kind of scorched-earth retribution he’s seen in drug killings sometimes. But this is a seriously upscale town, and the husband was an executive vice president at a big bank. It just doesn’t seem to fit.

Until it does. And where it leads Lucas will take him into the darkest nightmare of his life.

This is just a quick review. Stolen Prey is the 22nd novel in Sandford’s Prey/Lucas Davenport series, and it’s another strong installment – though not the strongest. It shows off Sandford’s skill for great pacing and prose, although I think it’s possible the author was trying to cram a little too much into the novel, which gave it a rather meandering feel to it. It doesn’t “fail” as a thriller at all, and it was still gripping and engaging, but I think Sandford has written stronger novels in the past.

The novel starts with a massacre in an expensive neighborhood – one that has the hallmarks of a retribution killing by an active, brutal criminal organisation in Mexico. In order to get to the bottom of the case, Lucas and the Minnesota BCA call in federal help and also a pair of Mexican Federales, who offer their own expertise in pursuing the Mexican criminal cartels. From here, Lucas and Co. investigate the family’s business, their banks, and are led to a possible money-laundering scheme. As the bodies continue to rack up, Lucas realises that the case isn’t as clear-cut as one might expect.

The story moves along briskly, and the dialogue is great and very realistic – there are plenty of natural quips, reactions, and not a cliché in sight (so rare in thrillers, these days). It’s clear that Sandford is extremely comfortable with the characters, and as a reader who has enjoyed every book in the series, it is a pleasure to rejoin Lucas, his long-time partner Del, his wife Winter and the other recurring characters. I enjoyed the side-plot, in which Lucas’s wrist is broken at the very start by two robbers who jump him at an ATM. Davenport sets Virgil Flowers, his protégé and hero of his own new series, on their trail.

Unfortunately, I’m not really sure what else to write about the novel that either won’t give away some twists or spoil some red herrings and the ending that Sandford has woven into the story. There are some pretty great surprises, and some good new narrative devices deployed. It does the trick. It didn’t have as much impact as some earlier novels, but I doubt fans of the series will be disappointed.

I’ve said it before in my other reviews of Sandford’s novels, and I’ll say it again here: this is a great thriller series overall, and one I can’t recommend highly enough. Stolen Prey’s greatest strength is that it adds yet more layers to Lucas and the members of his family, as well as characters like Del. I particularly liked the increased focus on Letty, Lucas’s ward, and her character development.

Stolen Prey is out now in the US (hardcover), and will be published in the UK in July 2013 by Simon & Schuster (Trade Paperback and eBook).

You can find out more about Sandford’s many novels – including chronologies and synopses – by visiting his website.