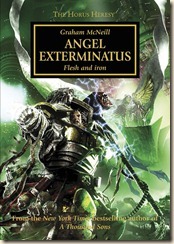 The Iron Warriors, the Emperor’s Children, and secrets between brothers

Perturabo – master of siegecraft, and the executioner of Olympia. Long has he lived in the shadow of his more favoured primarch brothers, frustrated by the mundane and ignominious duties which regularly fall to his Legion. When Fulgrim offers him the chance to lead an expedition in search of ancient and destructive xenos weaponry, the Iron Warriors and the Emperor’s Children unite and venture deep into the heart of the great star maelstrom that haunts Perturabo’s dreams. Pursued by vengeful survivors from Isstvan V and the revenants of a dead eldar world, they must work quickly if they are to unleash the devastating power of the Angel Exterminatus!

In Angel Exterminatus, McNeill gives us a story of a rebellion under strain. The novel follows two traitor legions that could not be more different: the stoic, methodical Iron Warriors; and the wild, arrogant Emperor’s Children, who have given themselves wholesale to the debaucheries of Chaos. The story maintains the high standards of the Horus Heresy series, and certainly justifies the new hardcover editions. This is a solid addition to the series.

In Angel Exterminatus, Fulgrim approaches Perturabo to help him recover some ancient, planet-killing weapons from the dark days of Eldar history. The Iron Warriors are currently executing a campaign to clear out some Imperial Fists, and it is through their eyes that much of the story is told. Kroeger, a relatively lowly Iron Warrior, catches the eye of Perturabo after he single-handedly storms a barricade, butchering the defendants. The attack was against the Primarch’s orders, and in a surprising turn, Kroeger is promoted to Warsmith. It’s a sudden turnaround for the character, but it is a useful narrative device to introduce us to Perturabo’s eccentricities and also the peculiarities of the Iron Warriors’ command structure and internal traditions. The story is told from three predominant perspectives – the Iron Warriors, the Emperor’s Children, and a ragged band of Istvaan Massacre survivors determined to stymie the traitors’ plans.

Learning more about the Primarchs is always welcome, and McNeill has done an excellent job of realizing Perturabo. The Primarch is a great character, and the author highlights his quirks and considerable depths with considerable skill. The Primarch is far more nuanced than others realise, and this misunderstanding of his character and abilities lies at the heart of Perturabo’s resentment towards his brothers and also the Emperor who, he feels, have relegated the Iron Warriors to the role of the Imperium’s “diggers”. He is chaffing against his perceived place in the Great Crusade, and resents the fact that his brothers (especially Rogal Dorn, of the Imperial Fists) and their Legions look down on the Iron Warriors.

With the arrival of the Emperor’s Children (a Legion McNeill is so very good at writing), we see just how far they have fallen into deviancy, debauchery and depravity. Fabius’s experiments are becoming more abominable, as he experiments on fellow Astartes in order to create a… ‘new’ type of warrior. His experiments, not to mention the Emperor’s Children’s descent from grace, are troubling to Perturabo and his Iron Warriors, who are uncomfortable with spending any time in the presence of their “brothers”.

The third strand of the narrative follows a loyalist band of Iron Hands, accompanied by a Raven Guard stealth warrior and a Salamander apothecary. The Raven Guard, Sharrowkyn, is one of the main characters from McNeill’s Kryptos e-short. The Iron Hand, Wayland, is also prominent in this novel. I was very happy to see these two characters return, especially the former, who I think still has a lot of potential for other stories. It was also interesting to read about a group of loyalist Astartes who are battling with the loss of their Primarch, as well as a dire supply situation, and a desperate thirst for vengeance.

The three strands of the narrative build into one of the craziest endings in a Black Library novel I’ve read in a long while. It’s… well, big. It is the first time, actually, since The First Heretic that the essence of Chaos is expanded in a big way. And damn is it well done. (No spoilers – you’ll just have to read the novel.) Some of it wasn’t entirely clear, though. There were a couple of things I thought could have done with a little more clarity – for example, knowing what I do about Lucius, the Emperor’s Children’s greatest swordsman, I thought the last few scenes focusing on him were a little vague. The novel also features many references to a great massacre and tragedy on Olympia, the Iron Warriors’ homeworld: because I haven’t read McNeill’s other, post-Heresy Iron Warriors novels, this left me rather confused and frustrated at not having the whole story. (This latter issue is something I really want to remedy, and soon – it’ll be easier now that the novels have been collected.)

As can now be expected from McNeill’s novels, Angel Exterminatus has a great balance of all-out warfare, tension, and character development. The plotting wasn’t as good as A Thousand Sons (which is still, in my opinion, his best novel), and I thought the first half of the novel had a little more over-describing than usual. (Ironically, at one point, Perturabo accuses Fulgrim of a similar tendency toward over-description and the use of ostentatious language.)

Nevertheless, and this minor complaint aside, Angel Exterminatus moves the story of the Horus Heresy forward, introduces a game-changing development, and also improves our understanding and knowledge of another Legion (the Iron Warriors). I thoroughly enjoyed this novel, and fans of the series should certainly consider buying the special edition hardcover.

Posted by Civilian Reader at 7:45 PM