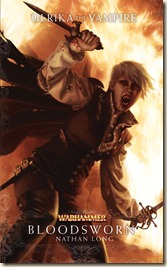 The final novel in the Ulrika the Vampire trilogy

Returning to Nuln after her adventures in Praag, Ulrika finds the Lahmian vampires preparing for war. Across the Old World, their rivals, the sinister von Carsteins, attack their strongholds and lead the witch hunters to their hidden lairs. Spurned by her sisters, Ulrika forms an uneasy alliance with the von Carsteins in a plot to destabilise the Empire by striking at its very heart – they plan nothing less than the assassination of Emperor Karl Franz. With enemies on all sides and the Empire in flames, Ulrika must decide whether her future will see her living among the humans, or as their enemy.

This is the final installment in Nathan Long’s Ulrika series, and it goes out with one hell of a bang. It runs the gamut of the fantasy genre – moving from urban-based mystery to epic battles and exaggerated magical conflict. It’s tightly plotted, populated by engaging and interesting characters, and is a great end to the series. Long is still one of my favourite fantasy authors, and I am a little sad to be saying goodbye to Ulrika.

After the events in Prague (see Bloodforged), Ulrika has returned to Nuln hoping to warn her Lahmian former-masters of the impending plot to destabilise the Empire by, as she discovers later in the novel, murdering the Emperor Karl Franz. If you can’t remember everything from the first two books, that’s not going to be a problem: there are some handy hints and reminders sprinkled here and there throughout the story that should serve to refresh your memory and catch you back up again.

The novel can be split into two main acts. The first act of the story takes place in Nuln, as Ulrika attempts to get her message across to the bickering and spiteful Lahmian court in Nuln. She is basically unsuccessful as sour memories of her past in the city come back to haunt her. Long treats us to a lot of swashbuckling action, a few chases through the city, and some sleuthing and investigation, as Ulrika attempts to discover the identity of the spy within the Lahmians’ ranks.

The Lahmian vampires continue to be, basically, nuts. They have been driving themselves mad with centuries of incessant intrigues, internecine feuding, and an evolved, entrenched paranoia that the Sylvanian vampires are more than capable of exploiting. Which is ironic, given the Lahmians’ reputation as the beguilers, seducers and master-manipulators.

While back in Nuln, Ulrika rekindles her connection with Famke, the get of her former-mistress’s nemesis. Much younger when she was turned, and from very different background (which we explore a little in Bloodsworn), Famke is chaffing at her situation – loving the comfort and security, but also hungry for adventure outside of the gilded halls of Nuln’s well-to-do. There’s a really interesting dynamic that develops between Ulrika and Famke, after she decides to run away with her wayward sister. Famke also reminded me of Claudia from Interview With A Vampire, in a number of small ways. Her story is an interesting one, that ultimately ends in tragedy for both her and Ulrika.

The second act sees Ulrika’s faith in humanity absolutely shattered. This unleashes the fury inside her, which she has thus-far done an admirable job of suppressing. Her allegiances are fractured as she gives in to her desire for complete, violent vengeance. She seizes an opportunity that presents itself, and walks down a very dark path for much of the rest of the novel. We learn more of the Sylvanians’ plans for the Empire, how they have managed to turn humans against the Lahmians – by stirring up a vampire- and witch-killing-fervour of Salem-like proportions (naturally, very few women killed are actually vampires). We also get some very interesting and original explanations and descriptions of necromancy in action. And we meet possibly the hardiest band of mercenaries I’ve read in a long while.

However, as with the Lahmians, the Sylvanians share the vampires’ natural penchant for intrigue, back-stabbing, paranoia, and any number of other self-destructive character flaws. This could end up proving too much for Ulrika to navigate, unless she is able to rise to the moment, and take advantage of her compatriots’ fecklessness and hubris, not to mention control of their forces… Ulrika, it turns out, is pretty shrewd, and her less-than-monstrous impression and approach to humans will ultimately be her redemption.

The stakes just keep getting raised as the novel progresses. This makes it quite the engaging and addictive read, not to mention fast-paced and nigh-impossible to put down. Bloodsworn morphs from an urban, personal focus to a more epic (though no less personal) scale, as our protagonist takes part in open-field battles, raids, and also a pretty brutal prison-break.

Ulrika’s allegiances, in true vampiric fashion, are pretty flexible – in fact, this may be the only thing that I had a slight issue with: she switches allegiances rather quickly, readily and easily. Perhaps this is a reflection of the vampiric nature, but it felt a little too easy, despite the continued suspicions from certain new allies.

Nevertheless, it is the actions of the above-mentioned group of human mercenaries – men who should epitomize everything she has come to hate in humanity – that brings her back to an understanding and acceptance of the virtue of humanity, as compared to the bitchiness, arrogance and selfishness of the vampires.

I really enjoyed this novel, and the series as a whole. Ulrika’s a great character, and I think Long’s penned three novels that go a long way to developing her in a believable way (she was created by William King in the Gotrek & Felix series as a doomed love-interest for Felix).

Long’s prose are fluid and well-crafted, with little-to-no extraneous padding. The plot moves along quickly and logically, and the author is able to write set-piece battles, skirmishes, squabbling vampiric councils, and simple dialogues with equal skill.

This trilogy is highly recommended, and each of the novels has been a very satisfying read. A must for Warhammer fans, and one that should entertain fantasy and horror fans as well.

Posted by Civilian Reader at 4:05 AM