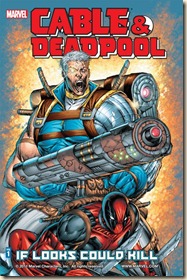 Wade Wilson (Deadpool) and Nathan Summers (Cable) are back, and this time they’re stuck with each other! Can two grown men armed to the teeth with deadly genetic weaponry live together without driving each other crazy?!

I’d never read any comics featuring Deadpool before this one, so I wasn’t really sure what to expect. I knew he was sometimes referred to as mouthy, and Ryan Reynold’s portrayal of the character in Wolverine certainly fit the part (indeed, the actor even gets a mention in this series). It wasn’t the best book I’ve read, and there didn’t seem to be enough focus on character development as I would have liked. It’s fun, but by no means the most rewarding comic I’ve read. Nevertheless, I’ll be reading book two quite soon…

Sure, it helped that I knew a fair bit about Cable already (though mainly from the X-Sanction mini-series that led up to the recently-completed Avengers Vs. X-Men Marvel Event. Nevertheless, I thought the story was a little thin – I understood both of the characters’ motivations for pursuing the Church (complete with its identity-stripped blue-skinned believers). Deadpool wanted to find something that would help balance his unstable DNA and physiology, while Cable sees a potential to further his own aims by stealing and using their technology. 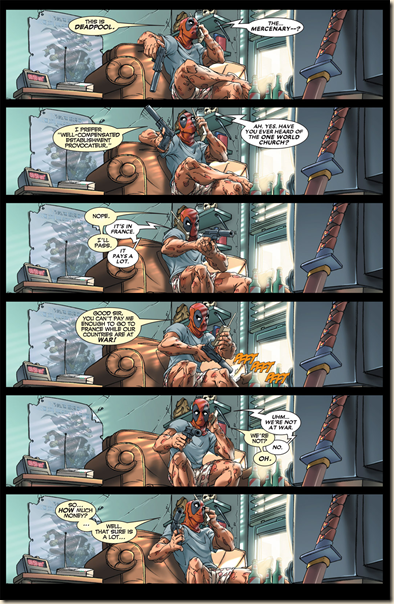 I thought the interaction between the two characters wasn’t bad, and sometimes quite amusing, with great timing. That there didn’t feel like much character development is a strange statement, when you consider how much time we spend inside these characters’ heads – what we get is either nothing particularly new or groundbreaking, nor is is particularly deep. Some of Cable’s internal struggle was a little opaque to me, too, having not read quite as widely as some readers will have done before reading this.

The story zips along at a very fast-pace, and we get a sense of the antagonism between Cable and Deadpool – most clearly illustrated at the beginning by the frequency with which Cable blows Deadpool’s brains out… (Healing factor, don’t forget…!): 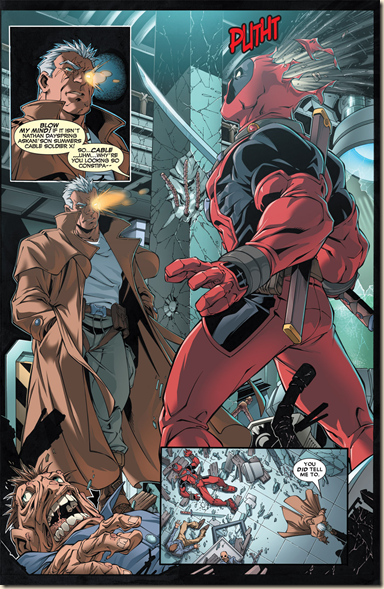 So, overall? It’s an ok comic series. It won’t tax readers, and the artwork and colours are strong, vibrant and distinctive. I didn’t find Deadpool as amusing as I’d hoped, but what little humour there is in the series is pretty well placed and used. 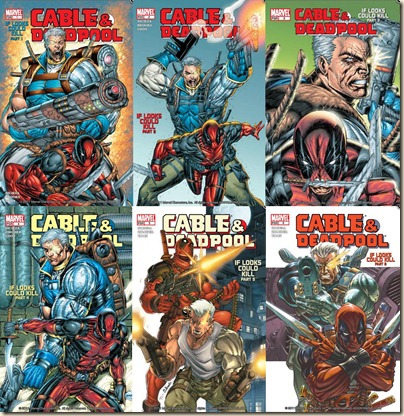 P.S. I read this on my iPad (through the Comixology app), and I must say digital comics look amazing on it.