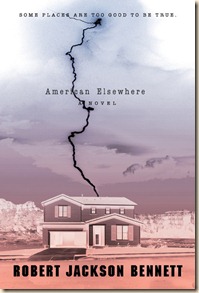 I’ve known about this novel for a little while, so I thought I’d put together an “Upcoming” post (I’ll be posting more of these each weekend, I think). I’m sure many readers have been keeping an eye out for new information about anything from Robert Jackson Bennett, but just in case…

American Elsewhere will be published by Orbit in February 2013. Here’s the synopsis:

Ex-cop Mona Bright has been living a hard couple of years on the road, but when her estranged father dies, she finds she’s had a home all along: a little house her deceased mother once owned in Wink, New Mexico.

And though every map denies Wink exists, Mona finds they’re wrong: not only is Wink real, it is the perfect American small town, somehow retaining all the Atomic Age optimism the rest of world has given up on.

But the closer Mona gets to understanding her mother’s past, the more she begins to understand that the people in Wink are very, very different – and what’s more, Mona begins to recognize her own bond to this strange place, which feels more like home every day.