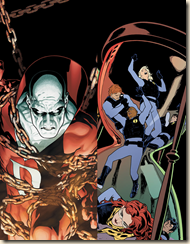 Ever since he died and became Deadman, Boston Brand has served the deity known as Rama Kushna, inhabiting bodies to complete missions that she dictates. But for the first time, Deadman may have a clue how to gain some control over his “life”, as he finds that the souls that he helps are going straight to Hell!

The Challengers. Out of time and on the run. Eight survivors of a fiery plane crash, bound by fate and death, are on a desperate mission to uncover the mysteries of the Unknown before the powers that saved their lives claim them for eternity!

DC Universe Presents is an anthology series, which will offer up short story arcs focused on a range of characters drawn from the wider DC Comics roster. In this first collection, we get the back-story of Deadman (who features in Justice League Dark, one of my favourite New 52 titles), and also the Challengers of the Unknown. The series has the potential to be a superb introduction for new readers, but also the potential to be very hit-and-miss. Which is how I felt about this book…

I really liked Deadman’s origin story. It provides all the context and background that wouldn’t have fit (not been suitable) in Justice League Dark. If you’ve been reading that series, and want a little more detail on the character, then I would certainly recommend this book. It’s dark, metaphysical, supernatural, and is both very well written and realized.

This story is really interesting and quite twisty, as we learn of how Deadman came to be the ghostly entity he is, and also what his intended purpose is. It sets the scene very well for anything that features Deadman in the future. It’s a pity it wasn’t longer, as I would happily have read more of the character and the lives he lived and the people he interacted with. 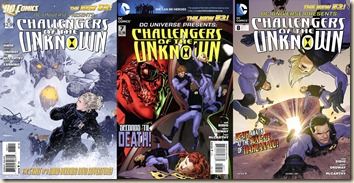 As for the Challengers of the Unknown…? This story-arc is highly uneven at best, and downright terrible for the other times. It is sometimes interesting, while at others I was bored out of my mind and just wanted it all to end (I wanted to read the whole thing, so I could do a proper review of the book).

The dialogue is riddled with cliché. I think this may have been intentional. The premise is of a reality show that stumbles into a sub-Indiana Jones, supernatural treasure hunt, complete with strange beasties and sinister goings on. It’s like the worst historical-supernatural-mystery fiction you can imagine. But with worse dialogue. It had a lot of potential, but ultimately it failed to do justice to the tongue-in-cheek-potential it promised. The artwork’s fine, on a similar level to the Deadman artwork, although there are some panels that looked rushed and lacking in attention or care (and therefore detail). It’s like all the purposefully bad bits of Stargate (which I love), Indiana Jones (special place in  my heart) and any number of others in that oeuvre, with the campness of Star Trek (fine, but didn’t really grow up watching it as I was more of a Star Wars fan). Only, this story is written as if by someone who thought these same ‘bad’ bits were actually excellent storytelling.

I’m all for tongue-in-cheek playfulness in comics (otherwise there’s no way I’d enjoy Extermination or Fanboys vs. Zombies), but this just fails miserably. This isn’t nearly as bad as The Avengefuls (which was possibly the worst short run of comics I’ve ever read), as the commentary and ‘humour’ aren’t needlessly offensive. This just isn’t very good.

Thankfully, this Challengers storyline was only three chapters, as opposed to the longer, much better, five-chapter Deadman.

So, overall, I liked the first half of the book, and didn’t think much of the second half. Lucky I managed to buy this second-hand and half-price, then.

Posted by Civilian Reader at 10:24 PM