Today the US cover for the fifth Sandman Slim novel was released: 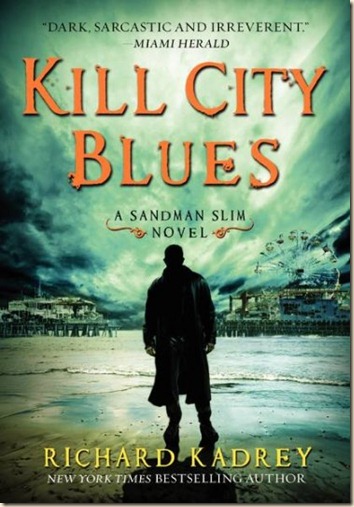 I’ve now read the first two novels in the series, and am very eager to get caught up before Kill City Blues is released. Expect a lot more of Kadrey’s work to feature on CR in the near future. A slightly-edited-to-avoid-spoilers synopsis is as follows:

James Stark, aka Sandman Slim has settled back into life in LA. But he’s not out of trouble yet. Somewhere along the way he misplaced the Qomrama Om Ya, a weapon from the banished older gods who are also searching for their lost power.

The hunt leads Stark to an abandoned shopping mall — a multi-story copy of LA — infested with Lurkers and wretched bottomfeeding Sub Rosa families, squatters who have formed tight tribes to guard their tiny patches of this fake LA. Somewhere in the kill zone of the former mall is a dead man with the answers Stark needs. All Stark has to do is find the dead man, get back out alive, and outrun some angry old gods — and a few killers — on his tail.

Kill City Blues will be published in 2013: July in the US and October in the UK (although, as with the fourth book, it appears that the eBook edition will be available in the UK in July as well, according to Amazon.co.uk).