Living in New York, it’s been impossible to miss the devastation left in the wake of Hurricane/Tropical Storm/Cyclone Sandy. With the Red Cross, Project Rubicon, Occupy Sandy and a considerable number of other official and crowd-sourced groups pulling together to help on the ground, author R.T. Kaelin decided to pull together contributions for a charity SFF anthology. The speculative genre has a history of pulling together to help worthy causes (I’m sure many of you will remember the hugely successful Genre for Japan initiative kicked off by now-Strange Chemistry editor, Amanda Rutter. To bring you more information about the Triumph Over Tragedy anthology, I asked Kaelin to write a few words, and also contacted a number of the authors involved to write a little intro to their stories (I’ll add more as and when they come in). 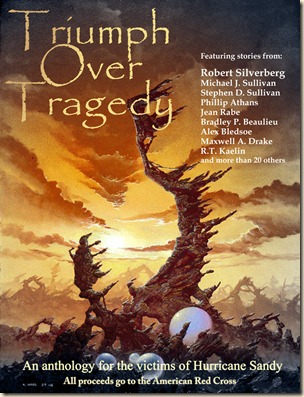 So, like many of you over recent weeks, I’ve been watching the aftermath of Hurricane Sandy after it ripped through the northeastern US. The images coming out from the region are astounding.

In past tragedies, I’ve donated some money to the Red Cross, but I’ve always felt like it was inadequate.

“Hey, you lost your home? Man, that stinks. Here’s fifty bucks. I gotta hop in my car now, get a cup of coffee and go off to work. What’s that? Your car and job are gone? Ooohh…”

This time, I had the idea to do more.

The idea was simple, really. Reach out to fellow authors and see if we could get some to write and donate some stories for an anthology. We would sell it and donate the full proceeds to the American Red Cross to help the victims of Hurricane Sandy (many of whom STILL do not have power).

The response was astounding. And thus, Triumph Over Tragedy was born.

To date, I have 40 authors committed, four editors, and an illustrator. The author list as of this moment [followed by a brief comment about their contribution, where possible]:

“Traditions” – This story is based on the world of Elan (the setting for my Riyria Revelations series) but it features a new never-before-seen character. The idea came from Shirley Jackson’s famous short story, “The Lottery” where the livelihood of a town is dependent on the sacrifice of one of their own. When Annie is selected, she takes matters into her own hands and dares to challenge the town’s traditions in order to move to a new future, that while it may be fraught with potential danger, also possess the possibility of new opportunities.

“Parting the Clouds” is a story about a young man who’s lost his way. He’s confused and in pain. He’s been hiding a secret about his parents’ deaths — a thing he won’t admit, even to himself. That all changes, however, when he finds himself at the center of a massive hurricane and the ties around the secret he’s been trying so desperately to hide begin to unravel.

“Katanoi” is the story of a maybe less than innocent victim of the crash of a starship — a crash that has demolished an entire village of innocent indigenous sentient aliens. Our hero starts off just trying to escape the wreck, but quickly realizes that he’s got a greater responsibility. A community of innocents have been devastated by the crash, and before he can save himself, he’ll have to save them.

“Wrap” is an extremely short story that touches on Lovecraftian territory, but relocates it to rural Arkansas. It deliberately leaves a lot to the reader’s imagination. I’m excited to have it included in this anthology, and I hope readers find it intriguing despite its brevity.

The storm outside rages. The sea creeps close, waves crashing against wall outside Matias’ cell. Soon, it will reach the lone, tiny window. It’s night, blacker than tar. His captors have left him — all of them — in the dark to die. The others’ screams echo through the halls. He is going to die here, as is his sister. This is their end. Then, he feels the faintest flicker of orange. He lifts his head, hopeful even though he should not be.

“I Am Made of Every Color” is a strange, dark little magical realism story. Anna is just like everyone else, except that when someone hurts her feelings, another layer of pearl wraps around her heart. Unfortunately, she finds out that people like to possess things that are strange and unique.

It is completely different in substance from anything else I’ve ever written. At the same time, it sums up the themes of my writing rather succinctly. However, I may not quite understand the concept of a ‘cheerful ending’.

“A Happy Mother Takes Away Pain” – Here a child hoping to find a cure for an ailing parent turns to supernatural forces when the medical world fails them.

In this story I was looking to explore the tragedy of generational conflict. I’ve seen so many parent/child conflicts where both sides loved each other intently, and yet could not find a way to express such. So often, these clashes are never resolved, and simply fester into ill will and a lack of communication. Here I simply wanted to “show, don’t tell” that such can be avoided.

When a boy in her service is kidnapped in a convoluted plot that ends with a knife to the throat of the country’s ruler, warrior Pimchan must use all her might, magic, and wit to defeat the enemy.

“Undivided” originally appeared in Marion Zimmer Bradley’s SWORD AND SORCERESS XXIII. The first line just came to me out of nowhere, and the rest of the story grew out of it, surprising me as it came.

About Dreamscape: I wrote Dreamscape a few years back, and it was subsequently long-listed for the International Aeon Award. Since then I’ve been waiting to give it a good home, so when I heard about Ryan’s anthology for the victims of Sandy – and the theme of the collection – the piece seemed an ideal candidate. The story itself is set in a near future where the use of nano technology is prevalent. Most appealing for the protagonist is the nanobots’ ability to make dreams a lucid reality, which she views as an opportunity to mend the broken relationship with her husband – and to heal her own wounds.

My story was inspired by learning of the wayang during a trip to Indonesia. So often stories focus on only the familiar traditions of our own culture, I thought it would be interesting to tell a story about someone of a different culture and a different time and how that person deals with adversity, both natural and man-made.

“The Burning Servant” is a dark story, with its roots in a dark time in our nation’s history. On one hand, there should be little need to add anything to our history of slavery to make it more disturbing; yet the ethical doublethink so many Americans engaged is routinely dismissed as “just being how things were then.” I hope that examining it anew through speculative fiction helps us see how much we compromised our ideals then, and helps us re-examine our actions and our ideals now when we are faced with adversity. Sarah Freeman triumphs over tragedy, but there is a cost. She accepts and acknowledges that cost – but do we?

“Welcome to New York” is about a woman from a traditional fantasy world in turmoil and war. She follows a demon into an unfamiliar world, a New York where demons do exist, but no one believes in them. Help exists in a New York City police officer and a Catholic priest, who saddle up to protect their city from a threat they don’t completely understand themselves. This story is about putting others’ safety above their own, regardless of the cost to oneself, as well as the wonder of New York to a first time visitor.

I used to write a lot of short stories. They exercise almost all the writing muscles and require an investment of time measured in days rather than months. I had a bunch published in magazines and then lost interest in that pursuit and started sticking them in an electronic drawer instead, which is why I can ‘selflessly’ rise to the call when worthy anthologies appear on the horizon. Generally I can just pull an appropriate story off the shelf.

With the theme of triumph over adversity I had an ideal candidate in mind. Unfortunately the family friendly nature of the anthology ruled out the use of the-7-dirty-words-never-to-be-spoken-on-television. I used 3 of the 7, a lot of times, and they were important to the tone and realism of the piece. I reached for another tale. This one is less about triumph over tragedy, but it’s certainly about triumph over adversity and contains an nice sub-theme of return to normality and of pulling back from drama.

The story Quick relates the experience of an ordinary young man in a humdrum job who is thrust by circumstance into the heart of a city-wide crisis and turns out not to be so ordinary. So far so generic. The element that lends the story a degree of uniqueness is the self-awareness of the protagonist. He understands that he has a choice and he doesn’t allow the flow of events to overwhelm and drown him.

If you are an author looking to contribute a story, feel free to contact me at rtkaelin[at]terrene[dot]info. Or send me a message via Twitter @AuthorRTKaelin.

Anthology details: 3-5k words in length (after all, we want to get this together quickly), genre independent, appropriate for all ages. As this will be an eBook only, total length of book will not matter. I’m guess we’ll be pushing 200k when all is said and done.

If you wish to buy/contribute, visit the anthology's site at IndieGoGo.com

Posted by Civilian Reader at 2:41 PM