Today I bring you a first for Civilian-Reader: our first guest post by an author. Raymond Rose is the author of Better Together (UK/US) and The Fire Inside (UK/US), a super-hero novel. This is the story of how he became a comic book convert, an interest of his that spawned the idea for his novel. 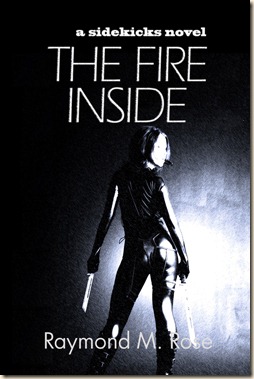 So, I shall pass things over to Raymond…

A Hero You Can Relate To

We pulled into the dirty parking lot of a 7/11 in Willow Grove, PA on our way to New Jersey. My sister, who’s bladder had been secretly switched at birth with an incontinent 80-year-old woman’s, had to use the bathroom. I had forgotten to bring a book so I followed them in, hoping to find something to read.

The place had a sour smell and my feet kept sticking to the tiles, covered in spilled Slurpee syrup. The magazine rack was covered in a layer of spongy dust. No paperbacks, but there were comic books on the bottom shelf. I wasn’t a big fan of comics and as I glanced over the Archies, Batmans, Avengers, Spider-Mans, and Supermans, none of them looked interesting until... I found this one tucked behind Spider-Man:

On the cover was The Hulk, teeth gritted, holding what looks like the whole side of a cliff on his back. Beneath the rock is a bunch of Marvel superheroes, wounded and vulnerable; none able to fight off their impending doom. The cover reads:

—AND HE’S NOT HAPPY!

What else was there to say? How could I not pony up the loose 75 cents I had in my pocket and buy that comic book? Even if the story sucked, at least I would still have that cover. You can debate free will all you want. That day, I had no choice.

The comic was called Secret Wars. This was the fourth issue.

And I bought it. 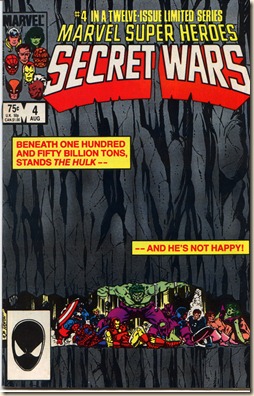 As we continued our trek to New Jersey in our mini-van with its faux wood panelling, I started reading the comic. The first page, a huge splash page, was the perfect follow to that cover: the headquarters of the good guys explodes with a BUH-WHU-WHOOM!, massive chunks of building thrust from a gigantic fireball! The next couple of pages showed Marvel’s good guys getting their butts handed to them by the bad guys. Some of the Marvel’s heroes were interesting but really it was the villains who were totally stealing the day! If, at that point, that been the sum total of the characters in the comic book, it would have been a pretty good read and I may have picked up a comic book again.

But when the X-Men entered the issue, it all changed for me.

This version of the X-Men isn’t the one from the movies, the old school characters from the ’60s, or even the ones that you see nowadays in their 55-million titles. This was ‘punk X-Men’: Storm, white mohawk and leather outfit; Wolverine, no-holds-bar disposition and metal claws; Rouge, a stripe of white hair and the hint of a past of crime; a blue skin elfin who can teleport named Nightcrawler; straight-laced Cyclops; and Colossus, a man of steel, pining over his lost love. They didn’t get along with the other heroes. Hell, they barely got along with each other. The X-Men seemed the opposite of the traditional superhero team. They seemed outside the mainstream. They seemed like a bunch of outsiders.

And that was something I could relate to.

The X-Men and I were a perfect fit. In that moment, I became an X-Men convert and a comic book fan for life.

Many, many years later, when I would set out to write a comic book story as a novel, I was very contentious of creating characters that I could relate to. I wanted to take the ideas and tropes of a comic book and use them to tell a riveting and thrilling story of a man who has intentionally forgotten who he was and has no choice but to remember. To build upon Jack, Bruce, and Katie’s comic book-esque past as teen superheroes and show you what happens when they grow up in the real world. But they had to be relatable. Especially Jack, the hero. He had to be the kind of guy you would want to get to know more of. Have a beer with (although, to be honest, Jack likes a glass of red wine himself) and spin yarns.

And let me tell you, Jack could tell you a yarn or two.

Check out The Fire Inside. A new hero you can relate too.

Want to know more about the author’s work? Check out Raymond’s website and his Goodreads page.

Posted by Civilian Reader at 4:22 PM