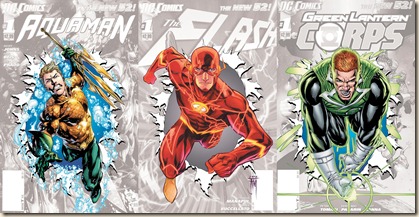 One more selection of DC New 52’s #0 issues, which I read on a bit of a whim. A broader mix, I think, with a couple more thus-far not read series. There were a couple of surprises and a couple of very promising issues that have managed to change my mind. As a result, there are now some more series I will be checking out. 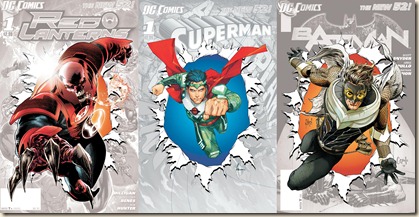 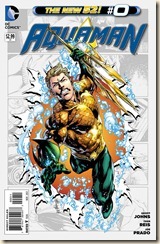 It’s the first appearance of Atlantis – and Aquaman’s first encounter with Atlanteans. How will this story of Arthur’s past set the stage for his future?

This issue is set six years before the main series begins, and apparently, “Before the world knew Arthur Curry as Aquaman”. Although, it actually seems to be just after everyone finds out who he is. If I’m perfectly honest, there’s nothing really to this issue, except a very snappy intro and Arthur’s first trip to Atlantis.

In other words, it’s... fine. I don’t think it really adds much to the series that was missing or particularly important – especially as it sends Arthur to Atlantis, then ends. So if you’re completely new to the Aquaman franchise, then you still don’t know anything about his time there, or the trials and triumphs he may have experienced in the underwater city. (Issue #1 of the New 52 series was the first time I’d read an Aquaman comic, so I still have no real idea what he experienced in Atlantis.) 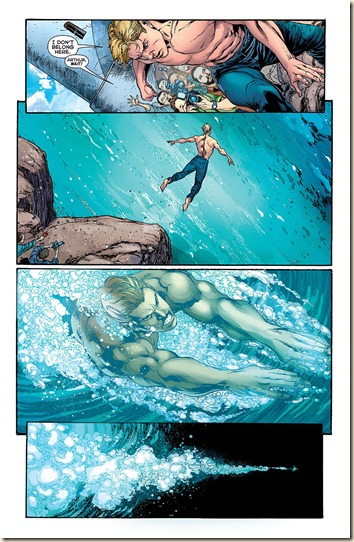 The artwork is very good, as can probably be expected. There’s not a whole lot of dialogue, and many pages are actually “silent”, which makes it more a showcase for Ivan Reis, Joe Prado and Rod Reis than it does for Geoff Johns. I really enjoyed the first few issues of the series, but I think this issue is perhaps one just for the completists out there. I’ve certainly read much better issues from Johns (who also handles Justice League). 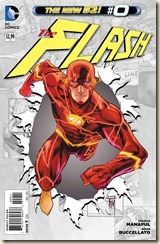 At last, it’s the origin of The Flash. The loss of his mother put Barry Allen on the road to becoming a hero, but only when he gains his powers will he understand her most important lesson.

This issue is set five years before the New 52 series begins, but also features a fair bit of flashback. It covers the Flash’s origin story, and gives readers an insight into Barry’s relationship with his father (who’s in jail for murdering his mother).

We see the accident that turned him into the Flash, we learn of his motivation, and also hear his thoughts while he’s recovering in hospital. While he’s recovering, we also get to meet some key characters from his life and the series, as they come to visit him. 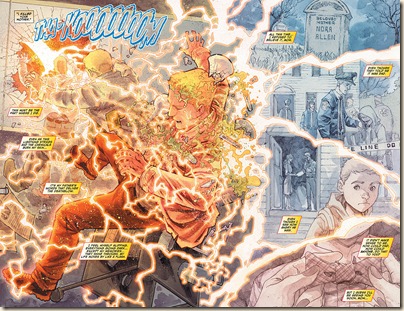 Except for Flashpoint, this is my first Flash comic, and I must say I am very impressed. This issue was, actually, quite brilliant I thought. It packs quite an emotional wallop from start-to-finish, as Manapul and Buccellato manage to convey Barry’s emotions and the trauma of his mother’s murder expertly through the artwork and text.

And I thought the artwork was great. I loved the slightly washed-out colours of the flashbacks, and also the strong, bold panels and pages of the ‘present’. 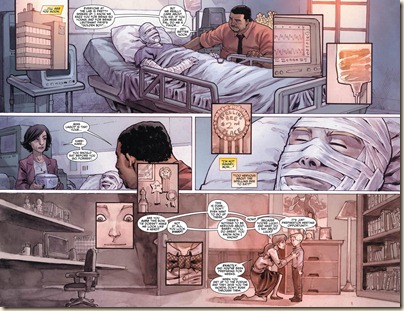 This was, therefore, a very pleasant surprise – the first collected edition’s just gone on the to-buy list (before this it had been fairly low on the Maybe mental list).

If I had one concern, it would be that Barry comes across as too good, which would actually make him a little dull. I like heroes that are slightly off, but I think I’m willing to give the series more of a chance. I would definitely recommend this as an introduction to the character. 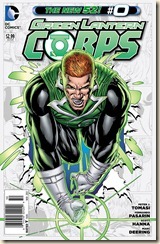 Prologue to “The Third Army”.

The New 52 origin of Guy Gardner, and his past has a way of catching up with him.

So, this I tried on a bit of a dangerous whim. I’d just bought the first collected edition of the series, but hadn’t got around to reading it quite yet. Thankfully, it didn’t scare me off reading the book, as it’s kinda interesting.

The story switches between two storylines. The first takes a brief look at Gardner’s training for the Corps, on what could be one of his last assignments at Lantern School (my phrase, as I have no idea what it would really be called…). It’s not going well, and his fellow Lanterns are being massacred around him: 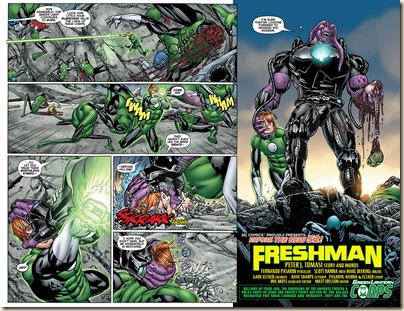 The other storyline tells us of how Guy got his ring. Apparently, this only happened three months prior to the opening scene. Guy’s family has a long tradition of joining the Baltimore PD. Guy somehow didn’t manage this (we’re given only hints in the story), and at the time of the issue, he’s at his sister’s graduation from the Police Academy. However, because his father’s there, and they don’t get on, we learn of their Issues. 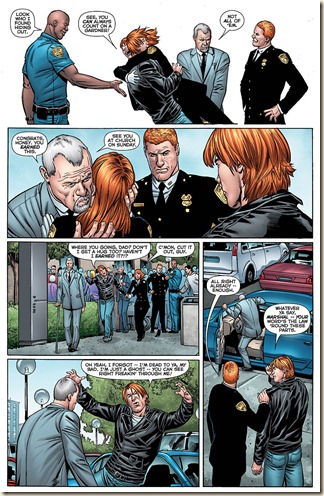 Things then start moving very quickly. After Guy visits his father to make peace – and instead has an almighty blow-out row – his brother is caught in a fire-fight in a dangerous neighbourhood and is all but doomed. But Guy saves the day and is quite suddenly and out of nowhere selected as a Lantern. Very suddenly. The ring just turns up, and there we go...

I guess he already knew what a Lantern was, as one of the guys who’s attempting to assassinate his brother makes a comment about how the Justice League’s not likely to be around this neighbourhood. I suppose that could account for his rather sudden and calm acceptance of the power ring. But still, I thought this could have been done much better and less hurriedly.

Apart from the shift in pacing near the end, this is a pretty good introduction to the series. I’m glad I’ve picked up the first collection, and this issue has made me quite intrigued about how events will proceed from here. 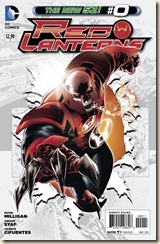 Prologue to “The Third Army”. Don’t miss this secret chapter of the Red Lantern Corps, as the legacy of Atrocitus’s violent past unfolds. Witness a prophecy that threatens to change everything.

It’s quite tricky to write about this one, having no experience with the series at all before I read this. Like Green Lantern Corps, above, I picked up the first collected book recently (the Strand has some very nice prices, sometimes), so I thought it would be nice to learn a little back-story before diving into the New 52 series proper.

It was not what I expected. I had anticipated it being a little darker, perhaps more violent (oh, it was…), but I hadn’t expected the Lovecraftian horror inflections. They were very welcome, though.

Readers will learn of Atros’s bloody and violent rise from family man to vengeance-and-rage-consumed warrior, and then to his transformation into Atrocitus (a name that is, frankly, atrocious…). 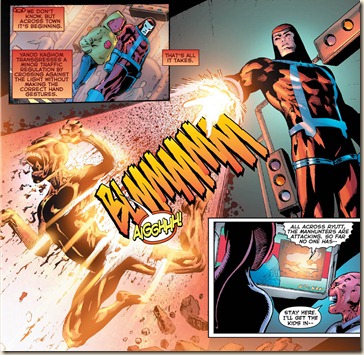 It’s dark, bloody (did I mention that before? Well, it’s really bloody), and pretty cool. I look forward to reading more of this, and seeing how the Red Lanterns fit into the Lantern universe and mythology. 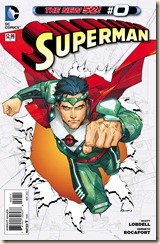 Take us back to the days when Jor-El learned the truth about Krypton’s imminent destruction. Plus: More on the introduction of the Eradicators!

I know some people who haven’t really been enjoying the New 52 Superman title. Personally, I’ve rather enjoyed many of the earlier issues, but partly because of the increased (but not dominant) focus on the journalism industry – which is, after all, where Clark operates. There have been some duff issues, or short story-arcs that haven’t exactly excited one’s imagination, but on the whole I thought it was ok.

In this zero-issue, Lobdell (new to the series) tells us the story of how Jor-El figured out Krypton was dying. Sort of. We join the story just after he’s figured it out, and then is confronted by some strange organic, ooze-like life-form underground and then heading back to the surface.

The first few pages have a fair bit of a sci-fi-info-jargon-dumping, but I did like the quick Star Trek nod on the opening page (“Jor-El’s log”): 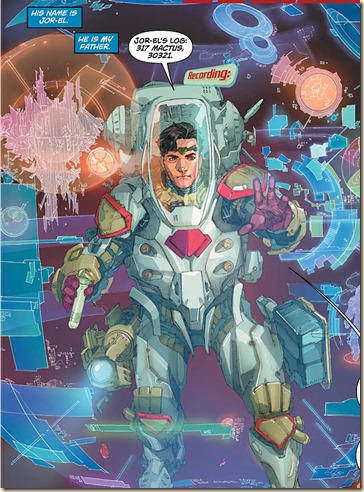 As I discovered, there is actually a fair bit to like about this comic, which surprised me. Not because I dislike Lobdell’s writing (far from it), but because of the setting. As I mentioned in the previous round of #0 reviews, I’m not a fan of the Krypton-based stories. But, in this case, Lobdell’s humour (the touching interactions between Jor-El and his wife, Lara, for example) made it a bit better. The two of them are actually pretty bad-ass together and I enjoyed watching them foil a home invasion and confrontation with a long-time antagonist. 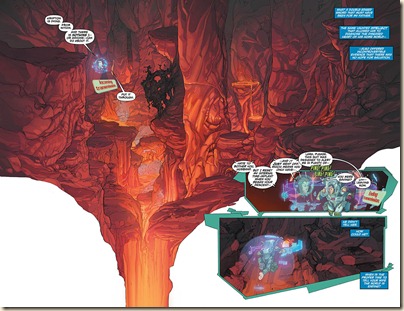 The issue isn’t perfect. For example, “Kryptonopolis” for a city name? Terrible. Just sayin’. There are also some rather cheesy lines (in a surprisingly old-timey way) sprinkled throughout the comic.

The artwork is clearly identifiable as Rocafort, with the sketch-like finishes that still manage to maintain a ‘sharp’ and focused quality. It’s very nice, and the colouring makes the issue really pop. 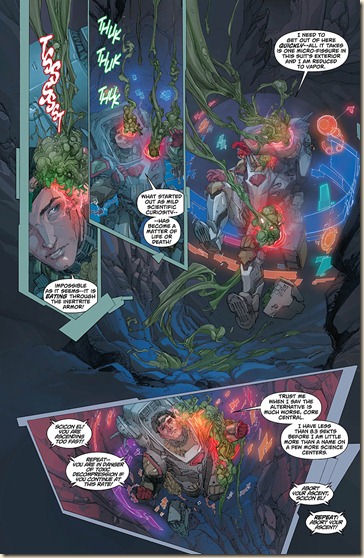 The last page of the story before the epilogue threw me a curveball, that’s for sure. Given that I’ve not been following Superman that much recently, I think I will need to catch up with the series to fully appreciate what happens. And we also get an epilogue, of course, which heralds and foreshadows stuff to come in the main series.

Ultimately, this is a nice diversion, but doesn’t offer what I look for in a Superman comic. Still, it’s pretty good and all-round well-composed and -realised.

If you love everything about Superman, and particularly the more hard-sci-fi stuff, then you’ll probably eat this up. 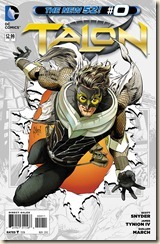 Meet Calvin Rose, the only Talon ever to escape the grasp of the Court of Owls. This former assassin just wants to live a normal life... but that’s impossible, since he’s being hunted by his former masters.

We’re introduced to Charley Rose, a rogue talon. The story alternates between the present and his childhood experiences with escapism – literal escapism, rather than flights of fancy in his imagination. He is confronted by a Talon at his day-job, working construction on the bridges of Gotham. Then he is confronted by an angry Talon, and things get a little tricky for him. The clocks are turned back as well to the time Charley was recruited from Haley’s Circus by the Court of the Owls. 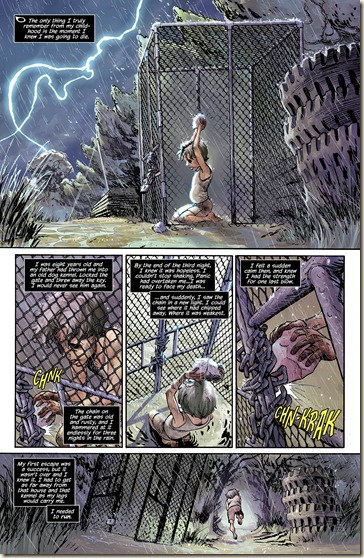 His father was a monster, which is why he ran away to the circus…

While at Haley’s, he had become a master escape artist, and then followed up this set of skills with further training to become one of the Court’s Talons. Unfortunately for the Court, Charley’s training wasn’t complete, and he has a crisis of conscience on an assignment, which sets in motion the story of the new series. 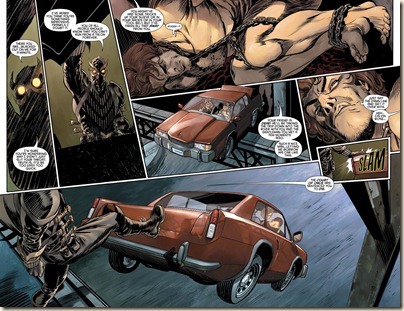 I haven’t been keeping up-to-date with news on this series, so I’m not really sure how significant some of this is going to turn out to be, but I do think the issue is a very cool introduction to this wayward Talon. This has a lot of promise as a series, and I think James Tynion IV is a talent to watch – he’s done some Batman back-up stories that have been really great, and I think he’s definitely a writer to watch.

As you can see from the preview images, the artwork’s pretty great, too. This is a series I am very interested in reading more of.

Posted by Civilian Reader at 3:51 AM