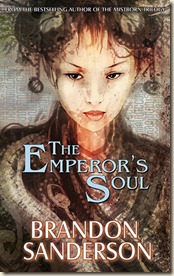 A novel set in the Elantris world. Sort of…

The tale of a heretic thief who is the only hope for the survival of an empire.

Shai is a Forger, a foreigner who can flawlessly copy and re-create any item by rewriting its history with skillful magic. Though condemned to death after trying to steal the emperor’s scepter, she is given one opportunity to save herself. Despite the fact that her skill as a Forger is considered an abomination by her captors, Shai will attempt to create a new soul for the emperor, who is almost dead from the attack of assassins.

Delving deeply into his life, she discovers Emperor Ashravan’s truest nature — and the opportunity to exploit it. Her only possible ally is one who is truly loyal to the emperor, but councilor Gaotona must overcome his prejudices to understand that her forgery is as much artistry as it is deception.

Skillfully deducing the machinations of her captors, Shai needs a perfect plan to escape. The fate of the kingdom lies in one impossible task. Is it possible to create a forgery of a soul so convincing that it is better than the soul itself?

As an introduction to Sanderson’s writing, this is a pretty good place to start. I’d never read anything by the author before this (despite picking up all of his novels over the course of a couple years). The novella is supposedly set in the same world as his Elantris novel, although Peter Ahlstrom (Mr. Sanderson’s assistant) assured me that it was only marginally connected. I enjoyed reading the story, and it’s an interesting introduction to and examination of the magic system the author’s created – the stamps and Forging are fascinating, and this was an enjoyable read.

The Emperor’s Soul is an intriguing story, one that gives us a quick introductory course into Forging and the inner workings of power in this state. All of it takes place in the microcosm of the Imperial Palace, from the perspective of Shai, who has been captured, incarcerated and effectively blackmailed to complete a hitherto-believed impossible task. It’s not an exhaustive introduction, as there were still plenty of questions left at the end, and I did find myself wanting to know a great deal more about the world and its various peoples.

Shai forms a bond with the Emperor’s oldest companion and advisor, Gaotona, a man who doesn’t find Forging quite as abhorrent as the other nobles and House elites (although, his interest only goes so far as him wishing to understand what he’s dealing with, rather than actually attempting the practice personally – to the end, he still believes Forging is an abomination).

I don’t want to get too much into the story and what happens, as that might make reading it redundant (it’s not even 200 pages long), but I thought Sanderson did a great job of fleshing out the world, giving us a big enough picture to get a feel for the society. I also liked the genesis of the Forging and stamps – having lived in Japan for a year, it was nice to read something that was recognisably a fantastical twist and adaptation of an actual practice from the Far East.

That being said, and this is more a complaint about Western writers in general who look to the East for inspiration, this world felt very familiar. I’ve found that authors from the US and UK (particularly) tend to borrow the same things from Chinese, Japanese, Korean culture and history. This has a tendency to make novels that draw inspiration from Asia feel very similar. Nevertheless, the magic system contained herein is unique and very well written and one gets the sense that Sanderson had it fully-formed before he started crafting this story. I’d certainly be interested in reading more fiction featuring this magic, this culture, and even some of these characters.

Sanderson writes fluid prose, and avoids clichéd sentences or dialogue. It’s no wonder he’s been so successful, really. That being said, given his penchant for writing Big Book Fantasy – his ability to produce near- or over-one-thousand-page novels each year is very impressive – in The Emperor’s Soul it’s almost as if he didn’t have enough space to flesh out a longer tale. It makes the novella feel like a single vignette or long Part of a larger novel.

Overall, then, it’s a good introduction to the author’s work, and has certainly made me interested in reading some of Sanderson’s longer fiction. I’ll either start with Elantris or the Mistborn series, depending on free time and whether or not I can make a sufficient dent in the once-again tottering TBR mountain.

If you’ve wanted to give Brandon Sanderson’s writing a try, but have been given pause by the sheer size of his novels, I highly recommend you track this novella down. I enjoyed this quite a bit.