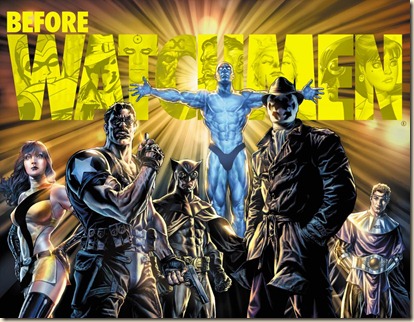 The second month of Before Watchmen releases was 50/50 for me, as you can read here. Len Wein’s Ozymandias #1 disappointed me as much as Brian Azzarello’s Comedian #2 did, while Darwyn Cooke’s Minutemen #2 was great, as was as his co-authored Silk Spectre #2 with Amanda Conner. In August, the new round of Watchmen comics got their first 5-issue month in which we were also introduced to Brian Azzarello’s and J. Michael Straczynski’s second titles, Rorschach and Dr. Manhattan, respectively. So let’s see how the month went... 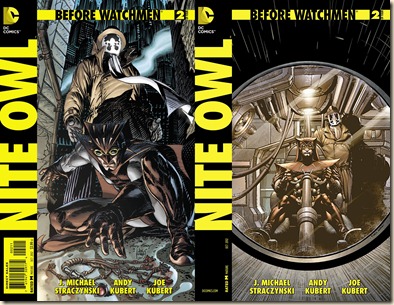 This issue continued the story of the second Nite Owl and his fellow crime-fighter Rorschach, as they both tackle their inner demons and struggle to remain a team. My gut feeling about this issue is that it is not as good as the first one because I just couldn’t get into it as easily. On a second read, however, I appreciated the subtext much more. While the first issue introduced us to the characters, this one went behind the scenes to look at how these guys think and why they do what they do. 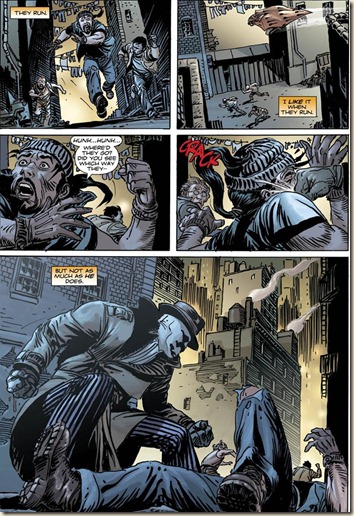 The inclusion of the Twilight Lady, a sort of glorified pimp who “runs a stable of high-priced call girls and fetish operations” (Hollis Mason’s words) was somewhat shocking to me. It added an adult risqué element to the mini-series, which I’m not sure I can get behind as it took me away from the story of Nite Owl/Danny. The re-read showed how important this is to the duo’s current situation and how it ties into their pasts since they’re investigating the death of a prostitute, murdered in a busy apartment building where no one cared enough to even call the cops. In that context, this looks to be a promising plot-thread and I’m interested in seeing how it works out for the third issue. 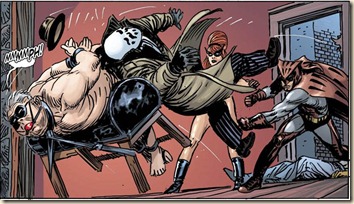 The artwork for this issue is slightly better than last time. I suppose I’m now just used to the style that the Kuberts have gone for. The dark palette makes things a bit dreary at times, giving the issue the same feel as some of the grittier Batman comics or the darker episodes of Batman Beyond or Batman: The Animated Series. In terms of the covers, the Kuberts’ primary cover is pretty good, continuing the theme of Rorschach having Nite Owl’s back (he says as much to Nite Owl in issue #1). David Finch and Sonia Oback’s variant cover is a bit more light-hearted, however, and it also portrays Nite Owl as more muscled and athletic than he appears in the comic.

Overall, I like where the mini-series is going and I think I will be sticking with it. 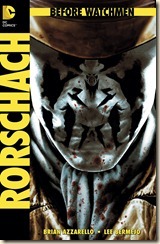 “What made you this way?”

Next was Rorschach #1. Like the first issue of Ozymandias, this one didn’t work for me either. Brian Azzarello is just this huge disappointment for me in recent weeks. I’m quickly becoming disillusioned with his Wonder Woman run, and the Comedian’s first two issues failed to impress me as well. I’m just not sure what it is he wants to do here.

This issue is one where I have no idea how to express my thoughts. The art was incredibly hit-and-miss, the story pretty much all miss. For me, especially as someone who has never read the original Watchmen comics, I have no reason at all to be drawn to the character. Azzarello writes this issue as someone who is very much detached from the character, as if he struggled to get the reader interested in Rorschach and, when he discovered that he couldn’t, just didn’t bother. That’s harsh, I know, but that’s how this issue makes me feel. Straczynski has done a much better job with Rorschach and, if I'm honest, Comedian is a better mini-series than this one. Looks like that to me at any rate. 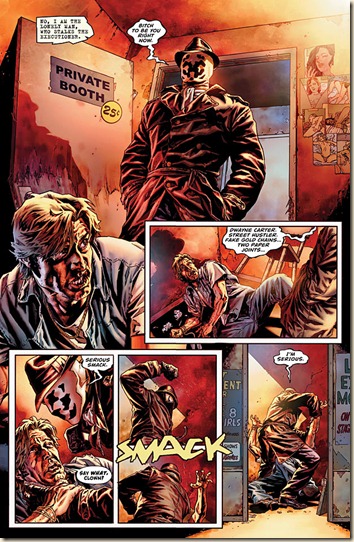 And so, this is another title I’m going to pass on. Unfortunate. 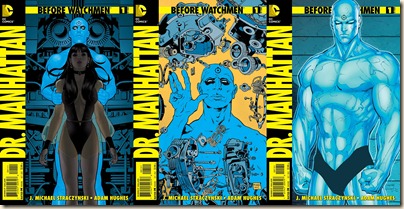 “I watch as a box containing a mystery is lowered into the soil.”

Thankfully, this was a great issue in every respect, and certainly as great as Nite Owl #1. Dr. Manhattan is an all-powerful character within the Watchmen-verse, very much as AMAZO is in the larger DCU. As such, to capture the personality of such a super-super-character in just 26 pages is no easy thing. The writer has to work doubly hard at making the character compelling and interesting and human, while also showing off their super-smarts. 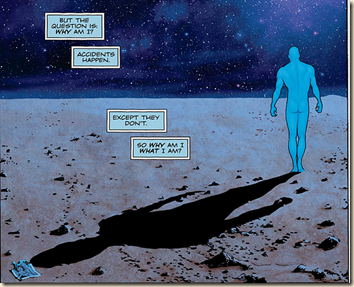 And Straczynski does that here because the philosophical nature of the all-powerful Doctor is portrayed intelligently. Throughout most of the issue, we get Jon’s commentary on how he sees the world around him ever since he got his powers, his hopes and dreams, his fears and disappointments, his relationships, and so forth. Because of his fascination with clockwork, Jon is a man who has let opportunities pass him by, relationships-that-could-have-been, which he ignored because he was always fascinated with the “mystery of what’s in the box”. And that’s how he sees life, his every waking moment, everyone around him. Since becoming Dr. Manhattan, he has become even more detached from the things around him and that’s what Straczynski conveys here, and he manages to pull it off. Not easy, writing about a character that can change quantum realities at will in the smallest of ways. 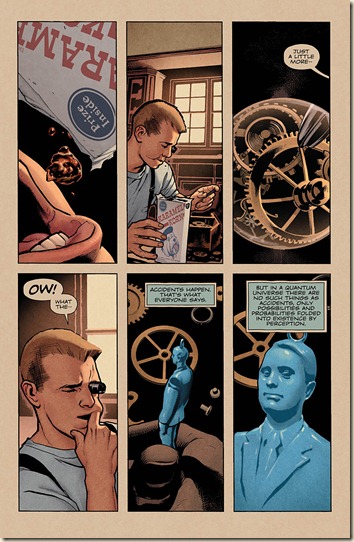 The ending is just mind-blowing, too. It offers a ton of possibilities with respect to what made Jon into the Doctor, and the mystery of what’s in the box. The clockwork of life that leads Jon into going back to the lab for something as small as his lover’s watch changes his entire life and perspective. The reader is forced to ask how much of it all was happenstance, and how much it... wasn’t. The next issue is going to be something really phenomenal I feel.

The artwork by Adam Hughes (primary cover/art) and Laura Martin (colours) lacks the vibrancy of Silk Spectre, the softness of Minutemen, the gritty-edge of Nite Owl, but it still manages to impress with its simplicity. Hughes’ characters are very emotive, and composed with proper range. For a character like Dr. Manhattan, wearing those emotions, at least on the outside, is really important to cut through their detachment. And that’s where Hughes’ art really impresses. Martin’s colours are very... traditional, they are neither too simple nor too flashy. In outdoor scenes, you really get the shining, lighting effect. In the indoor scenes there’s that hint (sometimes very obviously so) of darkness, of seriousness that lends the proceedings a very weighty feel. For scenes such as the first meeting of the Crimebusters, or the final one with the test chamber, it all just clicks together. And in terms of the cover, Paul Pope/Lovern Kindzierski’s first variant was just awesome, a much better composition than Hughes’ own primary cover. 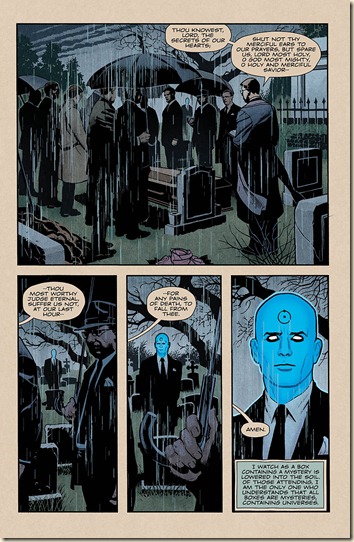 So yeah. This is an issue that definitely got me hooked and I’ll be picking up the second one for sure. 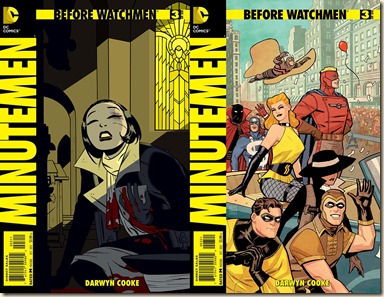 “I’m not here to bust you, I’m here to recruit you. How’d you like to work for your Uncle Sam, Eddie?”

The first two instalments of this mini-series have been just great, and when I saw that cover, I thought it was going to be a special issue, perhaps the issue which would decide for me if Cooke was a genius or a damn brilliant genius. I’m happy to say that it was the latter for me.

Minutemen #3 is a very emotionally-charged issue, for several reasons. One, it starts with Hollis Mason getting a call from a friend of Nelson’s who threatens to sue Hollis over his book, an autobiography of sorts that exposes some of the deepest, darkest secrets of the Minutemen. From there, we move on to the aftermath of the Comedian’s sexual harassment of Sally, an aftermath in which Captain Metropolis convenes a “men’s only” meeting to decide Comedian’s fate. Sadly, things don’t go too well and escalate to the point where Comedian is eventually hired by the American government. That’s the first half of this book. I think that this point in the story has come at just the right time. We’ve seen the whole setup, the various relationships that are established when the Minutemen come together, their first few escapades, the hints of tensions between everybody. All of that has come to a head now, and it’s downright messy. The various topics that Cooke touches upon show how male-centric the society is and how male-centric the Minutemen themselves are, for Silhouette plays no part of the meeting to decide Comedian’s fate. This also goes to show just how different Silhouette’s priorities are to everybody else because she isn’t concerned with the image, but with the work, borne out later when she and Sally are doing a pin-up shoot and a disagreement about sexuality causes Silhouette to stamp out. 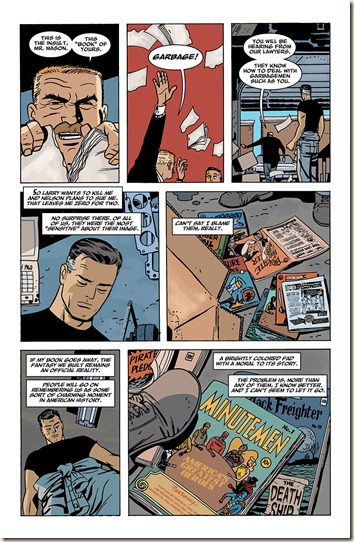 The second half of the issue is about the relationship between her and Hollis. They are the only two on the team who understand each other to any degree because they have their priorities straight and are not distracted by the flashy stuff that comes with their crime-fighter identities. This is where the emotional tension of the piece really ratchets up. It marks a big turning point in how the overall narrative is progressing, as so far Hollis has been our narrator and we might as well be reading his memoirs, rather than witnessing the events. That personal touch works very well. The resolution of the second half is a bit tragic but has ramifications for the next issue, which I’m really looking forward to. 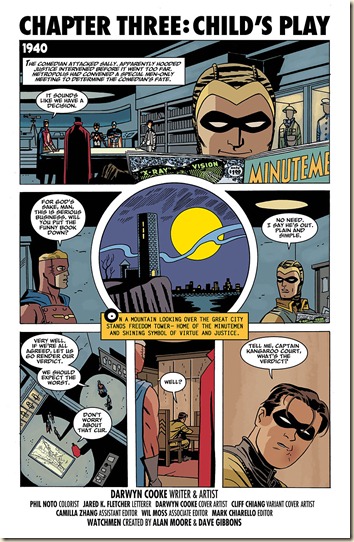 As I said, Cooke is doing double-duty here as he is also doing the artwork. I don’t if it’s the double-duty that is the cause of it, but his art meshes perfectly with the story. With the exception of Silk Spectre, there isn’t any other Before Watchmen mini-series in which the artwork is so appropriate to the story, and which really gives readers the feeling that they are reading a story here, and not a dry version of events. Every panel stands out, every character emotion, every gesture, every locale... just everything. Phil Noto’s colours add just the right amount of richness to the panels. The best cases are the small panels that showcase scenes and text from in-universe Minutemen comics of the era. These panels convey single concepts as if there is a lot of background to them.

In the end, with the exception of Silk Spectre #3 (a September release that I’ve already read), Minutemen #3 is the best issue in the entire Before Watchmen event so far. Simply phenomenal stuff as far as I’m concerned. At the risk of repeating myself, Darwyn Cooke is a damn genius.

Posted by Civilian Reader at 4:56 AM