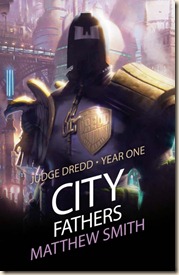 The Making of the Lawman...

Mega-City One, 2080. It is Joe Dredd’s first year as a full-eagle Judge – he may have been created from the genes of Eustace Fargo, the ‘Father of Justice’, and thus part of an illustrious lineage, but right now Dredd is not long graduated from the Academy, and yet to establish himself as the metropolis’s toughest, greatest cop. His reputation will be moulded in the years ahead, but at the moment he’s a young lawman, fresh on the streets.

The brutal murder of a Justice Department-sanctioned spy sparks an investigation that will see Dredd trawl the criminal underworld in the hunt for the killer – and he will discover that all is not what it seems in the sector's murky black market. Something new has entered the system, and unless Dredd can stop it, chaos will be unleashed...

This novella, which was released just before the new Dredd movie hit cinemas, is a great story of Mega City’s most bad-ass of cops. Set in his first year, it serves as both introduction and refresher course, for new readers and lapsed enthusiasts (the latter including yours truly). I really enjoyed this story, and I hope there are more on the way. City Fathers is a great dystopian sci-fi crime thriller.

Given that we’re joining Dredd early in his career as a Judge, it was very nice to get inside his head. He and his clone-brother, Rico, excelled in all areas at the academy, but have come out very different people. Rico is rash, spoiled, a crook, and probably sociopathic. Dredd, on the other hand, is still noble, and is in awe of his genetic father, the first and greatest Chief Judge.

At one point, while in hot pursuit of a perp, Dredd questions the sense of enjoyment he gets from executing his role as a Judge, wondering if the thrill he feels is “a betrayal of the badge and the life to which he was dedicated.” At the Academy, his trainers had

“done everything they could to burn out every emotion, turn the cadets from flawed human beings into dispassionate, fully functional machines, capable of dispensing objective summary justice as befits the Law, not swayed by their own feelings.”

As someone who read plenty of Judge Dredd and Mega City One stories in 2000AD and Judge Dredd Megazine, it was great to see a different side of Dredd, to get into his head and be given a sense of how he thinks and feels about his life. That this is set during his first year on the job makes it doubly interesting, as he has not yet become the feared, supreme Judge that readers will be more familiar with.

We learn of the rigorous conditioning that takes place at the Academy, and how cadets’ emotions are “rigorously removed” and enjoyment of leisurely activities “forbidden”, ties with family and friends “abandoned the instant they began their training”. This harsh regime leaves the cadets and Judges with a “monk-like existence”, so that “All they had were their lives as Judges.” Dredd’s youth does dominate the story, but we already see shades of the older, harder, and less flexible Dredd showing through:

“The awareness of Dredd’s own fallibility, though, hadn’t entered into the equation, and it was this—perhaps the side of his nature that most would call human—that infuriated him. He was young still, he knew that, but he was at the same time impatient. He had standards to maintain, and anything less was doing a disservice to a memory and an ideal.”

The story opens on a gruesome murder scene, in which an official snitch has been butchered in his home, ostensibly to cover up something he may have seen (or, at least, that’s what the Judges brought to the scene believe). As Dredd investigates, though, he learns that there could be far more going on than what they first expected. People are going crazy and dying in bizarre and violent ways all across the city. Well, in more bizarre and violent ways than usual – Mega City One is nothing if not violent at the best of times. It’s perpetually warring factions and depressed population, not to mention its sheer size, led the City Fathers to allow the creation of the “Citi-Def”. Basically armed civilian defence squads, they were initially meant to serve in times of need, the citizenry’s own well-regulated, citywide militias. Instead, they “caused more headaches than they helped, and many at the Grand Hall questioned how long they would be allowed to operate before Justice Central stepped in and stripped them of their powers.”

Smith couldn’t help but use his explanation of the Citi-Def squads as a way to extrapolate and comment on certain American Constitutional rights that are forever mind-boggling to non-Americans:

“As far as Dredd understood it, it was a right-to-bear-arms deal that successive Chief Judges had been reluctant to revoke, knowing how strident those that stood behind that particular piece of legislation were. The fact that each block had a cadre of these creeps ostensibly to protect the thousands within each building from foreign invasion or catastrophe, but who instead were more prone to flipping out and encouraging conflict at every turn, was one of the many factors behind why the metropolis was this perpetual boiling cauldron of madness.”

As Dredd investigates the murder and string of strange deaths, the reader is taken on a trip through various strata of Mega City One’s society – from the run-down, rotting ghetto-habs of certain districts to the more salubrious, wealthy quarters. We also, of course, get a close-up look at the grungy and dangerous side of City life, as Dredd’s investigation takes him into the drug underworld.

Rico features only briefly in the story, aside from Dredd’s concern for how differently they have turned out. It’s clear more is going to be made of Rico’s corrupt lifestyle and absent moral code in the future (certainly in the comics, but hopefully in more fiction, too).

Smith has written a very good sci-fi crime thriller – complete with a detailed and well-paced investigation, a gripping conclusion, and strong characterisation throughout. The author has absolutely done justice to his faithful portrayal of the source material, while also expanding and enhancing the world in which Dredd and Co. operate in. I really wish this had been longer – it’s a great story, and one that has managed to rekindle my interest in the 2000AD stable of characters and stories.