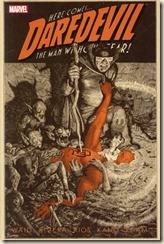 Following a shocking discovery about the Marvel Universe, Daredevil has a weighty decision to make, the results of which will affect his friends and enemies both! Meanwhile, the Nelson and Murdock law offices struggle to celebrate the holidays as insurmountable problems descend upon them! Then, Spider-Man and Daredevil team up when Black Cat is arrested, and Murdock is the only lawyer who will touch her (her case, we mean). The next great love triangle of the Marvel U begins.

I blitzed through this. The series has been showered with praise across seemingly the whole spectrum of comics establishment and fans alike. As a fan of Waid’s Irredeemable and Incorruptible, there was little doubt that I would check out what he’s done with Daredevil. I really enjoyed the first book, and so there was no doubt I would pick this one up. And luckily, it does the trick – it builds on the setting and characters, and weaves in more of New York’s super-hero community (Spider-Man and, in Volume 3, Punisher). I thoroughly enjoyed this – the writing, artwork, everything.

The first chapter of the book is a stand-alone tale, which I thought worked not only as a great introduction to this book, but also this whole series and character. Matt Murdoch, Daredevil’s ‘real’ persona, is working with a school for the blind and has taken a handful of their more ‘difficult’ students – those who are handling their disability less well, or are hyper-wary of the world because of their inability to see it – on a field trip that turns into a bit of a disaster. It’s a nice, self-contained story, one in which we see Daredevil’s dedication to helping everyone. It also shows us how people pull together to overcome challenges – it’s a very moving story, actually. Great start to the book. 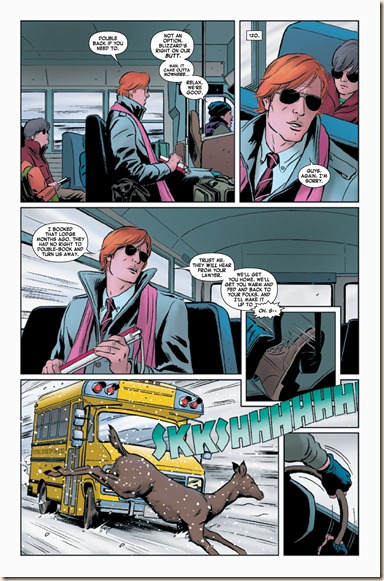 Then we get Amazing Spider-Man #677, which introduces the connection between Spider-Man, Daredevil and Black Cat. Even though it’s firmly within a very-well-established series, I didn’t feel at all lost or frustrated at not knowing the back-story. Perhaps it has something to do with reading a number of Spider-Man-related comics and also, interestingly, being familiar with Black Cat – I think, when I got my first comic books, one of them was a Spider-Man title that featured Black Cat as well. I must have been about six years old or something. She may have been my first crush… 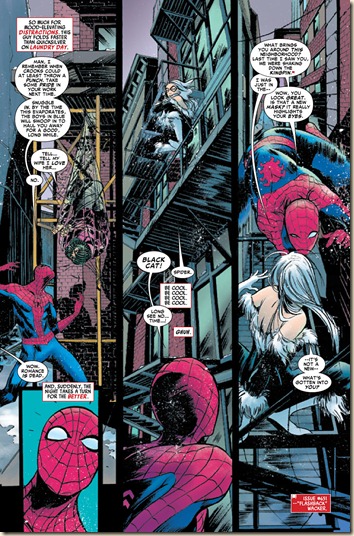 Anyway, that was a little off-track. For the next few chapters, Spidey, Daredevil and Black Cat’s stories are intertwined as they join together to solve a robbery – which Black Cat is framed for, and also work out what’s going on with the Omega-Drive (the repository of all the information on all the main mega-crime syndicates. I know what you’re thinking – why did the syndicates put their information onto one storage device? I don’t know, but it’s certainly stupid on their part. But then, that seems to be one of the running gags in this series – the crime syndicates are quite feckless, much to Daredevil’s chagrin.

Things between Daredevil and Black Cat go… very well, and Spider-Man, who is newly single and has a history with the feline thief, is less than impressed when he sees them making out. “I think this is my super villain origin…” he mutters.

The story takes a bit of a tangent, then, as Daredevil investigates what’s going on at the local cemetaries, where massive subsidence has caused a number of graves to empty into a chasm beneath the city. This offers up the opportunity for some truly eye-catching artwork: 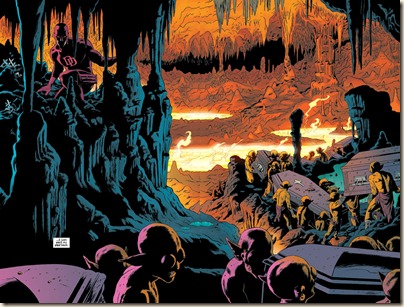 This story was kind of interesting, and certainly very well written, but it was also a little strange. I preferred the focus on Spider-Man, Daredevil and Black Cat, but that is still explored in greater detail in the book.

Overall, it’s clear to see that the story is building up towards the cross-series “Omega Effect” event, that crossed over into Avenging Spider-Man #6 and The Punisher #11 (and which I’ve already reviewed here and here). The more I read of this series, the more I like it. The writing is superb, the artwork is always interesting (the radar sense was under-utilised in these issues, I thought – certainly less-so than in the first few issues).

I’m not really sure what else to say about the series that I haven’t already said in my review of Volume 1. It’s a fantastic new direction for the character, building on the Daredevil mythology brilliantly, while not alienating new readers. I would highly recommend this.

I can’t wait to get my hands on Volume 3 (which is already out, actually).

Because I can’t resist sharing more of the man’s work, here are the two Lee Bermejo variant cover images: 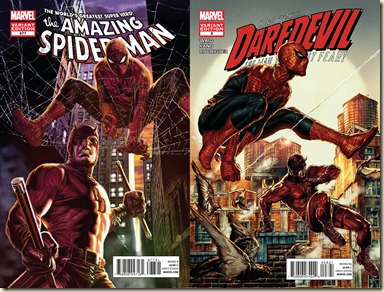 Posted by Civilian Reader at 5:55 AM