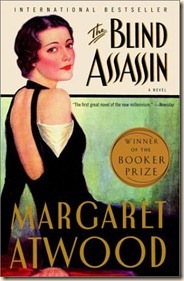 I know that Margaret Atwood has an unsavory reputation in a lot of genre circles, but that hasn’t stopped me from reading her 2000 novel The Blind Assassin several times since the first time I read it in high school. And I rarely reread novels. Along with One Hundred Years of Solitude, The Blind Assassin is easily one of my favorite books of all time.

The Blind Assassin is a tricky book to pin down. It won the Man Booker Prize and was included on Time Magazine’s list of the 100 greatest English-language novels since 1923. It also contains a science fiction story (of the “talking squids in space variety,” even). The book is not science fiction in and of itself, but you’d have to be pretty determined not to read it, at least in part, as a love letter to the pulp SF novels of the ’30s and ’40s.

Part of the reason the The Blind Assassin was able to convince the award committee to grant a pulpy space adventure the Booker Prize is because of its use of nested stories (which is also one of my favorite narrative devices of all time). The novel’s framing story centers around the protagonist Iris Chase as an old woman living out her last days. She relates to us the story of her life, from childhood to middle age, focusing on her relationship with her sister and a political radical who finds his way into their lives, as well as her unhappy marriage. All your typical literary fiction stuff.

But interspersed between Iris’ life story is a novel-within-a-novel called The Blind Assassin, which itself contains a story-within-a-novel. This fictional The Blind Assassin is a pared down, modernist story written by Iris’ sister about a man and woman carrying on an affair in a series of hotel rooms. The man, who is a science fiction writer, tells the woman the story of the blind assassin, a product of a galactic civilization who went blind from making carpets, was trained as an assassin, and eventually fell in love with a space princess.

Except, because this is Margaret Atwood, there’s a lot more to it than that.

The brilliance of this novel is the way the nested stories eventually intertwine completely. The pulp story and the modernist novel are both ripples of repercussions from Iris’ real life. The Blind Assassin suggests, among other things, that there may be more to pulp SF than mere entertainment, and that the modernist movement was wrong in its claims that only realism has anything to say about the real world.

I talked in my interview here about how much I love blended genres. Well, The Blind Assassin doesn’t so much blend genres as it forces them to interact. Realism and science fiction are not only given equal weight in the novel, they are held up as opposite sides of the same coin. Sometimes realism isn’t enough to see the truth about the world, so you have to find it lurking among blind assassins and space princesses instead. 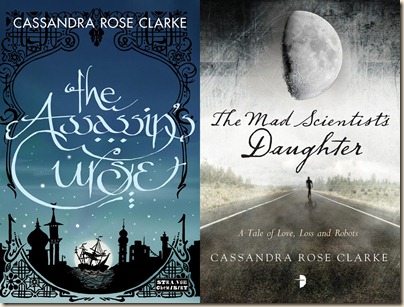