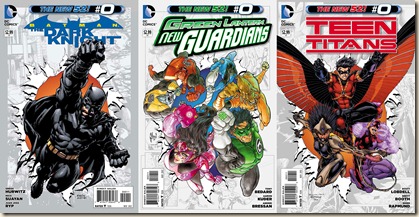 One final selection, I think. Dark Knight because I quite liked it to begin with (before it lost its way). But with a high-profile new writer, Gregg Hurwitz, I thought I’d give it a try. Green Lantern New Guardians because it was recommended by a friend (it was not what I was hoping for, though). And Teen Titans because the premise of the issue was interesting and far more Batman-related than the main series. And I’m a sucker for a good Batman story. 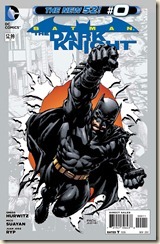 Batman takes on the most important case of his career as a detective – who murdered his parents? Meet Joe Chill and explore the epic conspiracy to wipe out the Wayne family!

This is the first of two misleading synopses this time around. Yes, the story follows young Bruce’s years-long investigation into who might have caused the death of his family. He’s exposed at a young age to the realities of high-level business and that, even if you believe you are always doing the right thing, others will think you’re treading on them and/or screwing them out of this or that deal. It does not, however, explore any “epic conspiracy”… 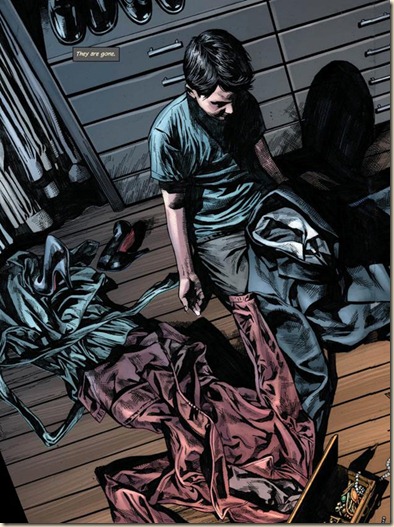 Regardless, and with that niggle aside, this issue is superb. The first few pages realise Bruce’s loneliness beautifully, his sense of loss palpable. The artwork is amazing, and evoke the mood Hurwitz was going for perfectly.

I won’t spoil the ending, as there’s a big reveal at the end that I thought was done very well, and only adds to Bruce’s frustrations. It’s a very good snippet of a formative event in Bruce’s evolution from single-minded survivor to the beginnings of detective he’ll become. 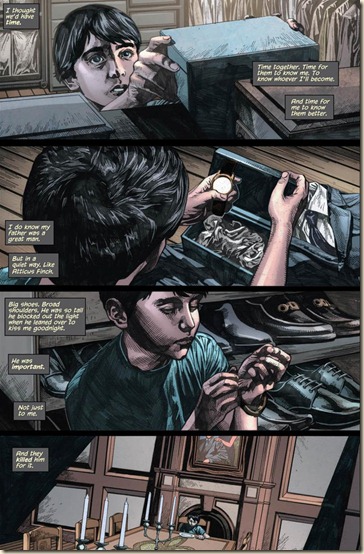 It’s an excellent issue, and I think the whole thing works perfectly. Absolutely superb. Hurwitz has done an exemplary job and his artistic team has realised his brooding story wonderfully. This gives me very high hopes for the series and its new direction/creative team. I’ll have to start reading it again. 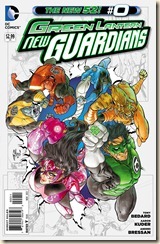 Prologue to The Third Army. A new team forms as Atrocitus, Larfleeze, Star Sapphire Carol Ferris, Saint Walker, Arkillo and Kyle Rayner prepare for war against the Guardians of the Universe!

The second misleading synopsis. Only two of the characters mentioned in that text and featured on the cover appear in this story. It’s rife with references to past events, which I knew nothing about. As a result, I have no clue how this works as a #0. It refers to late issues in the Green Lantern New 52 series (box-outs with “see recent issues” or “#12” of that series, for example). This means the issue is spoilerific in the extreme. And made me a little peeved, as I felt very much like I was late to the party, and that it should have been made clearer that this is set way ahead of the other Lantern series.

I would not, therefore, recommend this for newbies. At the same time, I am nevertheless intrigued to read more (as I am with all the Lantern series), but this was a disappointment.

Oh, one amusing thing about the issue: zombies! It’s always funny to see how writers are going to write zombie noises. Especially ones being attacked…

Even the short “Who’s Who in the New 52” text at the back of the issue didn’t help, and it looks like a whole other series may be needed to have the backstory. Naturally, this left me feeling both annoyed and curious about the other book... Sigh. I’m weak. 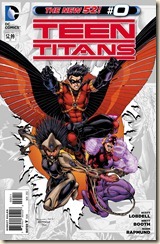 Focusing on the origin of Tim Drake; how a would be Olympic star and computer genius went on to become Batman’s third Robin. Plus: The beginnings of Skitter and Bunker.

This story gives readers a really interesting bit of background. I was especially grateful for it, as I knew nothing about Tim’s career as (Red) Robin. It was very interesting to see how far Tim was willing to go to get Batman’s attention (you do not mess with the Penguin...), and also to see how different a place, emotionally, he was coming from. Rather than Batman seeking him out to offer him a purpose, Tim actively seeks him out to ask for the gig – the story is set shortly after Jason’s death. At one point, Tim even offers that he’ll take the Robin gig as an unpaid internship? (As I’m currently working as an intern, this made me laugh.)

Because Batman’s still grieving the loss of Jason at the hands of the Joker (a story I still need to read), he is understandably resistant to take on a new protégé. 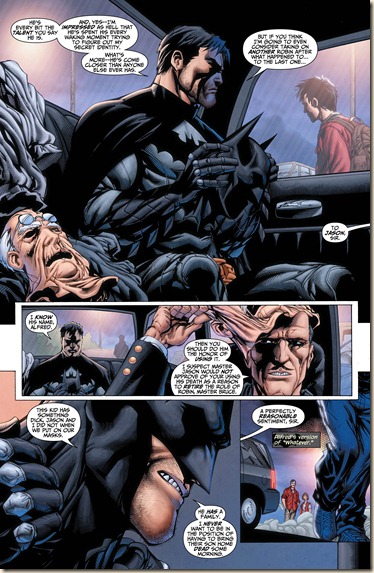 The issue does, however, also muddy the waters vis-à-vis the New 52 Batman timeline that has become apparent, thanks to the zero-issues. It would appear, for example, that Tim was only Batman’s partner momentarily, quickly forging his own path as “Red Robin” (which may also explain the alterations made to the Teen Titans first trade paperback). This is handy, because it offers a bit of an allowance for the space to be open for Damian, Batman’s son (see Batman & Robin). At the same time, given the newly-stated timelines, it means that in the course of just five years, Dick Grayson grew up to become Nightwing, Jason was killed by the Joker (and resurrected as the Red Hood), Tim became Red Robin, and Damian was born and aged 10yrs...

Confused? Yah. Me to.

Regardless, this is another very good issue, and does add a nice bit of colour to Tim’s backstory and Batman’s state after Jason’s death.

Posted by Civilian Reader at 2:06 AM