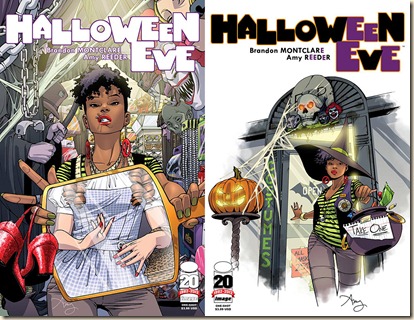 A seasonal one-shot comic that is fun but also flawed

Eve has an imagination that’s more than active – it can be downright dangerous! Working late at the costume super-store Halloween Land, she gets lost in her own thoughts until something goes bump in the night. The rubber masks and plastic novelties are coming to life, and Eve must face ghosts, goblins, and gorilla suits made real.

I’m a fan of Reeder’s artwork, so I was quite looking forward to this story when I first heard about it. While it has many strengths, it is also riddled with flaws – not least the premise, which is not exactly original (though there’s a nice twist of originality here-and-there to make it stand out).

The artwork is lavish and vivid, as can be expected, but the writing was a little bit sophomoric – especially Eve’s outbursts at the beginning, which felt unnatural and just made her look like a spoiled hipster, rather than someone who we should relate to and have sympathy for.

It’s a fun read, though, for the most part. I also think it would have worked better as a multi-part story. As it is now, it feels very rushed, when the story and the world the creators have created has a ton of potential to be further explored and expanded. This could have worked as a month-long title, perhaps with one issue released each week? A four-parter, perhaps, which would have given us time to get to know the character and, well, give a shit.

I was reminded of some of the wackier stuff from Alice in Wonderland and a less-adult version of a few Zenescope titles. The ending was predictable and just a bit sappy. It’s not a bad comic, necessarily, I just think it could have been a lot better.

Posted by Civilian Reader at 4:24 AM