This is the second in a new feature I’d like to become a mainstay on Civilian Reader, in which I ask authors and other bloggers to write a short piece about their favourite novels. Here, David Annandale tells us about a descent into the Pit that sparked his imagination and kept him coming back for more… 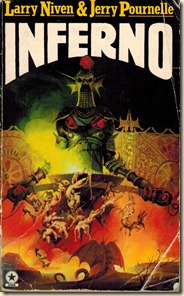 As I thought about this question, I was struck by the fact that if I had been asked simply what my favourite book was, I would have unhesitatingly said Denis Gifford’s A Pictorial History of Horror Movies. That book’s impact on my 10-year-old self was such that it pretty much determined the course the rest of my life would follow, particularly in matters creative and academic. But my favourite novel? That question gave me a lot more pause. Then I asked myself whether there had been a novel that wound up influencing me in ways not unlike the Gifford book did. There was: Larry Niven and Jerry Pournelle’s Inferno (1977).

Now here’s the thing about favourites: I firmly believe that they are almost always established in childhood. Favourite books, movies, music, comics, etc. – these are determined in our formative years, when everything is new, and everything is meaningful in a huge way. The only exception I can think of, in my experience, involves video games. My favourite is one I encountered in adulthood – Fable – but I have a huge gap in my gaming experience, basically leaping from the arcades of my adolescence (when Time Pilot was state-of-the-art) straight to the Xbox, so of course I hit those games with the slack-jawed wonder of childhood. And Fable was one of the first I played.

Anyway, back to Inferno. This is Niven and Pournelle’s return to Dante. The narrator is one Allen Carpentier, a science-fiction writer who dies and winds up in the outermost ring of Hell. An agnostic rationalist, Carpentier refuses to believe this is actually Hell, deciding it is, instead, a monstrous amusement park based on Dante’s work – “Infernoland” – and constructed using unimaginably advanced technology. He clings to this delusion as long as he can as he wends his way deeper and deeper into the Pit. His Virgil-figure is a square-jawed Italian whose identity is given away on the back cover of my edition, but I shall refrain from a spoiler here. The book is funny (though much of the wit went over my head when I was 12), fast-paced, and an enormously entertaining adventure. Niven and Pournelle follow Dante’s geography very closely, altering as required to bring Hell up to date. And, like Dante, they pack off to perdition some very recognizable names, including some not yet dead at the time of writing (hello, Kurt Vonnegut).

Whether I would agree today with all the satirical points being made in the book is completely immaterial. These were not things I understood or cared about when I first read the novel. What mattered was the adventure, and the spectacle of demons, a wall of red-hot iron, a lake of boiling blood, and a desert beset by falling flakes of fire. I was hooked. I read and re-read the book until I had huge chunks committed to memory (I can still recite the opening 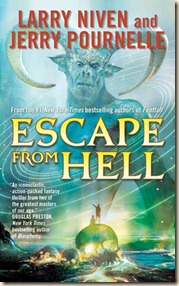 lines, over 30 years later). I did not want the adventure to end, and kept imagining a sequel. So imagine my eye-popping delight when an actual sequel, Escape from Hell, appeared in bookstores in 2009. I snapped it up on the instant, and discovered that every once in a while, you can go home again. (Yes, home, in this instance, is Hell, but damn, it’s a fun place to visit.)

And beyond the delight of the story, there was something else, which had the kind of long-term impact of the Gifford book, and why I think Inferno qualifies as my favourite. It raised some very uncomfortable (for my younger self) theological questions. And so a book whose narrative arc sees its narrator forced to accept the reality of the afterlife led me, in the long term, to take the completely opposite path.

So Inferno delighted me, excited me, opened my eyes, and has always been dear to my heart. I’m still a little wary of categorically declaring any one novel my favourite (I came very close to picking The Shining), but if this isn’t a strong contender for that position, nothing is.