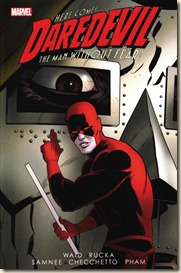 It’s the meanest team-up you ever saw as Daredevil, Spider-Man and the Punisher find themselves caught up in an epic chase across Manhattan for the Omega Drive – a powerful and dangerous information source that could change the course of all their lives!

Plus: It’s lawyers in love as Matt Murdock finally makes some time for Assistant District Attorney Kirsten McDuffie. But when Megacrime strikes back at Daredevil, the sightless super hero finds himself imprisoned in Latveria for crimes against the state! And as the law firm of Nelson & Murdock undergoes a drastic change, Matt’s “happy go lucky” veneer at last begins to peel back, revealing darker truths that may just end his heroic career.

That’s probably the busiest credits list I’ve ever seen for a single graphic novel collection… Nevertheless, this is a pretty solid book, and one that continues Mark Waid’s excellent run on telling the story of the Man Without Fear. “The Omega Effect” story, which forms the first three chapters (and reviewed first here & here), is a great opening mini-arc for the book, as it is the culmination of a lot of Daredevil’s shenanigans. I did, however, prefer the Daredevil-specific storyline that followed. This is a very good book, and I highly recommend it for fans of the series and Waid’s work in general; and also the series for people who want to read just great comics.

The book has a really great opening chapter, post-Omega Event: We learn of Matt Murdoch and his law partner, Foggy Nelson’s shared past at law school – specifically, how Matt saved Foggy from a bogus explusion attempted by a vindictive and dick-ish professor. It really helps explain and ground the incredible bond that formed between the two lawyers. 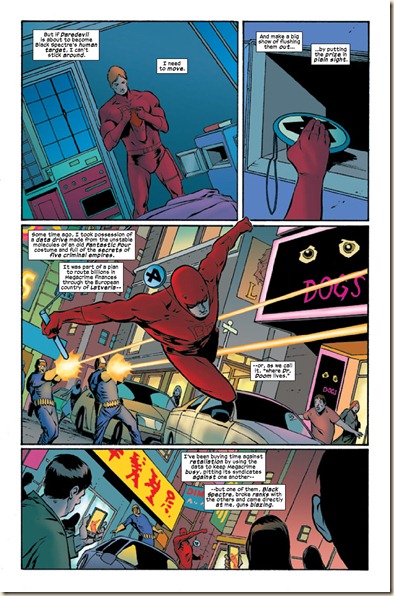 The story then takes the reader back to Daredevil’s ongoing battle against Megacrime and his continued custody of the Omega Drive. Temporary custody, that is, as Daredevil comes up with a clever ruse to get the various factions off his back (as part of a long-con he’s organised with some friends). However, after he completes this plan, something really strange happens… 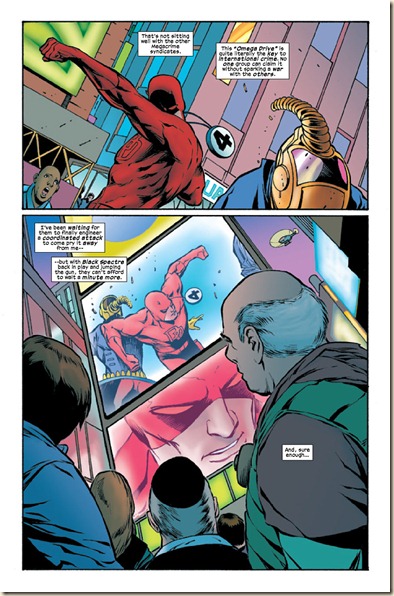 I won’t get into the story any more than that, because it’s filled with spoilers (there are some minor ones in the synopsis already, but they don’t reveal too much that will prevent you from enjoying this book). What this collection shows is that Waid is really firing on all cylinders with Daredevil. It’s classic and contemporary in style (art and writing), harking back to the tone of some older series while adding a freshness in content that is just a perfect blend. That’s a bit of a vague statement, but again – it’s intended to avoid spoilers.

The final couple of chapters also ask a very interesting question: What would Matt do without his powers? Where is the root of his powers? And just how resourceful can he be when in dire straits?

The artwork is consistent and good throughout, with a more classic style with less high-def details. It clean, clear, and simple, while retaining an eye-catching and strong impact. The radar sense panels are also great, as always, and the artists working on this book have done a good job of continuing what Paolo Rivera started with the series (although I do think he was much better, and his style was a lot cleaner).

Waid offers up a cliff-hanger ending, which makes me very eager to get my hands on volume four (which is published in March 2013 – issues #16-19 have already been published individually). 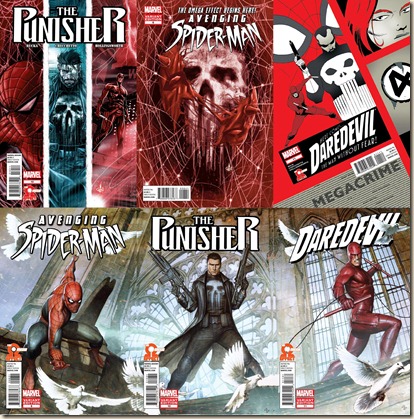 Posted by Civilian Reader at 1:34 AM