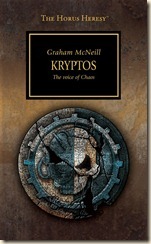 Bloodied but unbowed, the Raven Guard and the Iron Hands fight on. In the wake of the Dropsite Massacre, the shattered Legions are still prepared to bring the fight to Warmaster Horus and his traitorous allies. On the doomed forge world of Cavor Sarta, two veteran warriors of the Imperium strike deep into the heart of the Dark Mechanicum’s territory. With bolter and blade ready to cut down any who cross their path, they will seek out the enemy’s most valued asset: the mysterious ‘Kryptos’...

This is the story of a two-Astartes infiltration-and-capture mission. It’s a short story, but one that packs quite a punch and perfectly shows off McNeill’s skill in writing shorter fiction – you get everything you need, and are dropped right in without any difficulty. I really enjoyed this. That being said, I’m sad it’s only a short story, as a longer format would would have allowed the author to really explore some of the themes he touches on in greater detail.

One of the Astartes is a member of the Raven Guard, and the other from the Iron Hands Legion. Two very different Legions, with very different styles. It was a real pity that the story wasn’t longer, as I think there was plenty of potential for exploring the Legions’ and also the two characters’ differences. The massacre on Istvaan V, and its impact on particularly the Iron Hands is mentioned, but really not explored in any great detail.

The traitors are starting to show their more corrupt, colourful side, and the “ferrovores” (bio-mechanical monstrosities) we meet in this story are certainly well within the tradition of Chaos war machines from 40k fiction and also the tabletop game.

Kryptos is a short Heresy-era vignette, one not essential to the broader picture of the war, I believe, but one that is certainly a nice addition to any fan’s collection. Given how rich this setting is, I’m always eager to read more of the Heresy – the descent into Chaos of the Traitor Legions, and the desperate scramble of the Loyalists in the face of the hitherto unthinkable.

McNeill seems to be the new go-to author for Mechanicum-related Black Library fiction (he has written an Iron Warriors series as well as his Heresy novel Mechanicum and, most recently, Priests of Mars – which is inching up my TBR pile). As one can expect, therefore, this story shows a bit more of what the Iron Hands can do and how their affinity for the Cult of the Mechanicus has given them a whole new bag of tricks in their arsenal (hacking, in this case, but in a very Astartes way).

The story is delivered in very good, brisk prose and a pleasantly restrained writing style (there are none of McNeill’s verbal flourishes that have a tendency to crop up in his longer fiction). This is, overall, a good story that doesn’t let up from start to finish. If you’re looking for a quick injection of action set during the Horus Heresy, then this is a great place to turn.

Very much recommended for fans of the series.

Posted by Civilian Reader at 1:20 AM