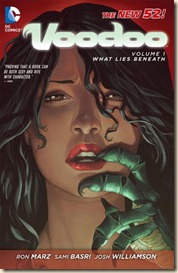 The first collection of the controversial New 52 title

Priscilla Kitaen is Voodoo, a mysterious beauty whose origins and motivations are unknown, seemingly even to her. Regardless of whether she is a hero or villain (or both), Voodoo is on the run, trying to stay one step ahead of her pursuers, using all of her considerable skills to complete a mission that will put the entire Earth in danger. Will even her shape-shifting powers be enough to keep her pursuers, including Green Lantern Kyle Rayner, at bay? Learn the truth about Priscilla Kitaen as she leaves a trail of violence across America.

This series created quite a shit-storm when it was first published. This was largely due to the fact that the first time we meet Priscilla, she’s working as a stripper. This rather robbed her of much potential appeal as a strong female lead in an otherwise male-dominated New 52 line-up (leaving only Batgirl and Batwoman in the original roll-out’s roster of strong female leads).

Naturally, the fracas surrounding this title piqued my interest. Given the sheer number of New 52 titles I was interested in, however, my interest was only piqued enough to put Voodoo on the “wait for the collection” list. What I found was a mixed comic – one that deserved a lot more good attention than it received and one that was harmed by the creative line-up change.

So. Let’s deal with the infamous first issue. Yes, it takes place almost entirely in a strip club. Yes, this means there are scantily clad ladies on almost every page and in every panel. Yes, this is not strictly speaking a Good Thing, and could very easily be accused of being a way to hook the interest of teenage boys. But, this is by no means the type of exploitative artwork that one finds in, for example, a few Zenescope titles, in which the scantily clad ladies are there for no other purpose than being scantily clad and titillating. True, that is also what strippers are hired for. Yes, this could have been set in a normal bar and had a similar effect. However, I think I know why a strip club was chosen: the third-to-last page. The stark, shocking contrast between Voodoo’s human aspect and when her alien aspect is revealed is stunning.

In other words: yes, it could have been done without the strippers and lingerie, but I do think I know why it was done. Let’s move on, as the series completely changes from here on, and there is nary a bra in sight. 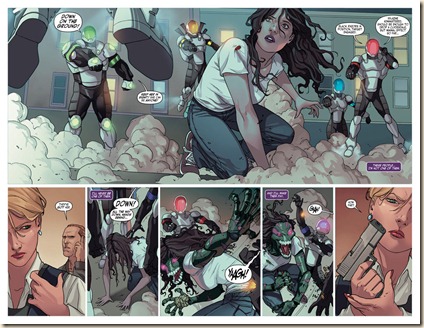 What follows is Voodoo’s mission to get information to her overlords. We are informed that she is on a mission, and she knows this. She knows what the mission is. We learn why she was at a strip club (a bit tenuous, and I didn’t entirely buy it, but it could be plausible). She’s being hunted by the Black Razors – some kind of super-hero-policing outfit that I’ve never heard about before.

If I had one problem with the book, it is the final two issues – this is when the writing duties changed hands, and there is a marked change in style and structure. The story jumps forward, information is dumped into our laps as if it’s not new when it actually comes out of nowhere. A ship that was underground… 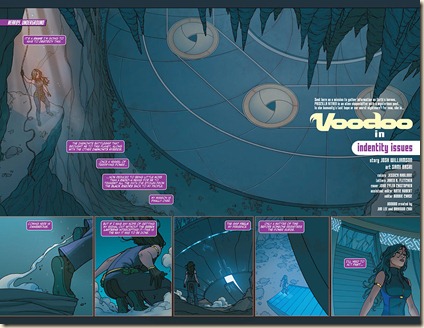 … is suddenly announced to be in low Earth orbit…

And this apparently requires some kind of black-hole-teleporter-device (below) to get… somewhere. The final two issues moved so fast, and had so much extra information that it was a little tricky to place it. It was clear that there was a lot of cross-over at this point with other series, some of which (Grifter, Superman, and Stormwatch) I had already tried out. I thought the Daemonites storyline dragged in the other series, so I was a little hesitant about reading a series that is so very much tied into their plot to take over Earth. But, this story is actually far more a story about a fugitive who doesn’t know where she fits in, or who she really is. She doesn’t fit in the human world, and the daemonites treat her like an abomination. She is looking for answers – why was she created? What is her greater purpose? What will be her ultimate fate? In other words, it’s the sort of story I enjoy. 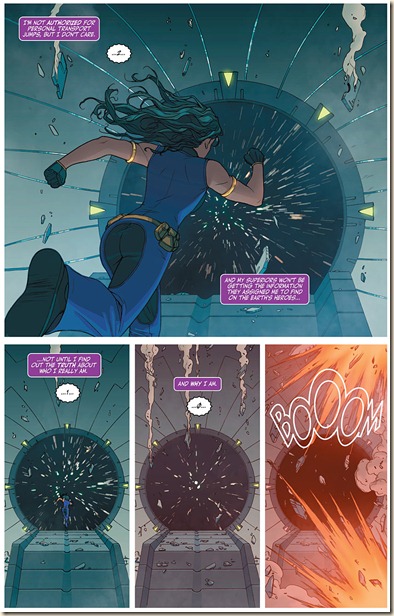 And Voodoo apparently set the self-destruct, too…

I think the first four issues were pretty interesting, as well as very well-written. What we learn in the final two chapters of this book also suggest some interesting things are still to come. Hopefully, the story and writing will settle down, and the final six issues of Voodoo’s story will be told in a stronger, more confident way.

Throughout, the artwork is very strong, and I really like the style. It’s moody but clean, and nicely eye-catching. There’s just one double-page spread that was ruined by the process of making the issues into a collection, as the fold in the middle obscured what I’m sure would have been a great, striking image (taking Voodoo’s two aspects and adapting them into two halves of Leonardo da Vinci’s Vitruvian Man).

So, now that I’ve finally got around to trying the series… it appears to have been cancelled. This is a pity, but I suppose given the issues that arose from the creative shake-up, not to mention the furore around the first issue, this series probably never had much of a chance of surviving very long anyway. I’ll certainly pick up the second, final collection when it comes out early next year. 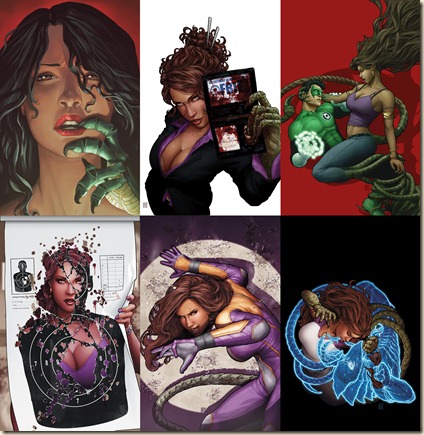 Posted by Civilian Reader at 2:23 AM