So, in these final months of 2012, DC Comics has decided another shake-up of the New 52 line-up is needed. In order to keep things nice and tidy, and limited at 52 titles, four more series have been axed: Captain Atom, Justice League International,  Resurrection Man and Voodoo. They join Blackhawks, Hawk & Dove, Men Of War, Mister Terrific, O.M.A.C. and Static Shock in the New 52 dustbin…

Justice League International I only recently tried for the first time – and I thought was a fun-if-exaggerated approach to super-hero science-fiction. It wasn’t the best-written of the New 52 I’ve read, but it was by no means the worst, either. Voodoo I actually only started reading today, so… I guess that will be a very short run-thing. (I will hopefully have the review of volume one up later this week.)

Resurrection Man, however, is a series I actually thought was pretty great. But, according to Multiversity Comics, the series had been experiencing lackluster sales numbers and a drop-off in quality. At the same time, it was nevertheless outsold the still-going Blue Beetle “on a regular basis”. Part of me wonders if it was not so much that Dan Abnett and Andy Lanning were forced to cancel this, but rather decided they wanted to pursue other projects outside of DC’s control – and hence Hypernaturals and a slew of other projects that have recently been announced, not to mention Abnett’s continuing career as a successful fiction writer (predominantly for Black Library).

I’m not sure what’s going to happen to the characters, but seeing as many from the first round of culling have cropped up in other series (although, O.M.A.C. appeared in Justice League International, so I don’t know about his future…), I suppose we can assume that the characters from this second round of cancellations could make guest appearances in continuing series.

The third wave of DC’s New 52 are (title, creative teams, #1 synopsis and my thoughts): 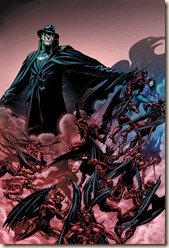 The Phantom Stranger strikes a bargain with Lord Trigon that will have serious repercussions in the DC Universe! From afar, Pandora watches!

The Phantom Stranger and Pandora appeared in the Free Comic Book Day New 52 issue, and have popped up in other issues of Justice League. I’ve managed to read the #0 for this series and was alternately intrigued and underwhelmed. The premise has tons of potential, but the writing I found in #0 was lackluster and underwhelming. I hope it improves. 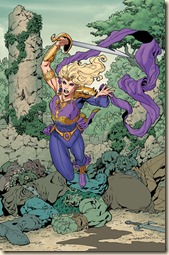 AMETHYST returns as this amazing new series begins! The good news: Amy Winston can transform into Princess Amaya, protector of Gemworld! The bad news: It seems her family wants to kill her! Plus: A backup story featuring the brutality of Beowulf!

Now this series I actually am aware of – in fact, many years ago, I remember my sister got a copy of the original series (which I’m pretty sure was just called Amethyst at the time), which I remember rather enjoying – this despite thinking at the time, in an oh-so-pre-teen-boy-way that it was as little girlie. This felt like DC’s She-Ra. I remember thinking the antagonist, Opal, was pretty creepy at the time, so I do hope they bring him back for this series. I’d be interested to give this a try, actually. I’d also like to read #0, but I just haven’t had the time to look for it. 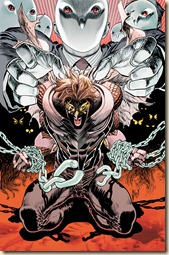 After many years on the run, Calvin Rose returns to Gotham City to investigate the fallout from Night of the Owls! Can the Court of Owls finally be defeated? Could Calvin have the one thing he’s been seeking his entire life: his freedom?

If this series is anywhere near as strong as the #0 issue and Tynion’s other work on Batman back-up stories, then this is going to be one of the best new New 52 titles. The story is an out-growth of the highly successful “Night of the Owls” Bat-family event, and expands on Gotham’s urban legends and secret history. I am very much looking forward to reading more of this series. 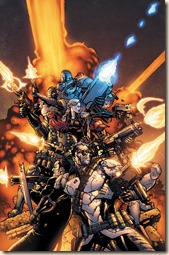 Learn how the secret wars of the New 52 were fought by TEAM 7! Early adventures of Deathstroke, Black Canary, Grifter, Amanda Waller, Steve Trevor and others! This issue: Battlefield Gamorra!

So this appears to be a prequel series for… a ton of the New 52 titles? The synopsis of #0 is actually a lot better at explaining what this series is all about (even if it is predominantly just a list of names…):

Threads of the entire DC Universe collide in this new series set in the early days of The New 52 from writer Justin Jordan (The Strange Talents of Luther Strode). • As Superman emerges, so too does the world’s counter measures against him and his kind! Dinah Lance, Amanda Waller, Steve Trevor, John Lynch, Alex Fairchild, Cole Cash, Slade Wilson are Team 7 – and their story will change everything you know about The New 52!

There’s something about this series that is, actually, quite attractive. I’ve now read a good number of the New 52, so it would be interesting to see some of the stories as witnessed from an alternative perspective.