In March 2013, Jo Fletcher Books will release the UK edition of Ian McDonald’s Planersrunner – book one in the author’s Everness series. The book is already available in the US, with the sequel also published this month (Be My Enemy). The reason I’m writing about it here is to share the quite striking UK artwork for the book: 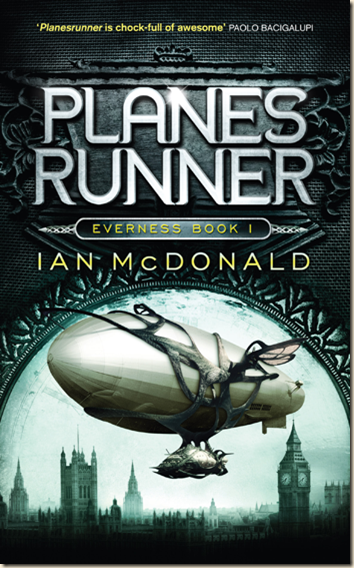 There is not just one you, there are many yous. We’re part of a multiplicity of universes in parallel dimensions – and Tejendra Singh has found a way in.

But he’s been kidnapped, and now it is as though Tejendra never existed. Yet there is one clue for his son, Everett, to follow: a mysterious app, the Infundibulum.

The app is a map, not just to the Ten Known Worlds, but to the entire multiverse – and there are those who want to get their hands on it very badly. If Everett’s going to keep it safe and rescue his father, he’s going to need friends: like Captain Anastasia Sixsmyth, her adopted daughter, Sen, and the crew of the airship Everness.

Planesrunner and Be My Enemy are published by Pyr Books in the United States.

Posted by Civilian Reader at 1:30 AM