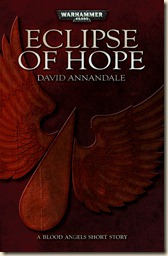 When Mephiston and the Blood Angels discover a world slain in a massacre that defies reason, they must unearth the cause of this mass killing but risk their own sanity to do it.

I am of two minds about this story. First, it features the Blood Angels and their Chief Librarian, Mephiston (psyker, in case that needs clearing up for anyone), who also happens to be my favourite of the Legion heroes – at least, what I remember of him from years ago. Secondly, and this was a pity, I thought the prose-style Annandale chose was a little strange. I think I know what he was aiming to do, and it’s certainly a different voice to his previous fiction that I’ve read (a sign of a gifted author who’s willing to challenge himself). It’s a good story, but I’m not really sure what people will make of it.

The Blood Angel force first lands on a planet whose population has been entirely wiped out. It appears that they turned on each other, and killed everyone to a man. After a very, very brief skirmish, they head back to their strike cruiser, and encounter a mysterious ship, which rather than being entirely real appears to be a “warp echo”. This, I thought, was a very cool idea, showing that Annandale has a great imagination for creating Chaotic story features (the same can be said for The Carrion Anthem, which was the first of his work that I read). It also brilliantly illustrates how much scope and potential Chaos-related stories have, and the opportunities they offer for an author to really flex his or her creative chops.

Right, to the writing and prose. I though, ultimately, that it felt rather over-done – in far too many instances, it felt like more words were used than was actually necessary. Or a more archaic approach was taken to sentence structure and word-placement (“ripping given embodiment” was one particular example that jumped out at me). I’m not sure why this decision was made – perhaps in an attempt to give Mephiston’s perspective an ‘arch’ or Imperious edge. That would have been in keeping with his character, but it didn’t make for a very easy read. It succeeds, mostly, in making him come across as imperious (as does the reaction to a humorous comment of his to a Legionnaire). But it didn’t make this a better read, sadly.

There’s a suggestion at the end of the story that there is more to come from Mephiston and the Blood Angels, which I would certainly like to see. However, I hope Annandale and his editors reign in the writing a bit next time around. This style doesn’t work for me as much as I know it does for others (I’ve already discussed it with another reader). It’s good for a single character’s voice, but a whole narrative makes it feel overdone.

In my opinion, this isn’t as good as The Carrion Anthem. Still, if you’re a Blood Angels fan, I’m sure you’ll like this.