A fallen Frank Castle learns the hidden truths of the Exchange and how it’s connected to some of the Marvel Universe’s darkest secrets! Then, when ex-Hydra and AIM agents team up to bring down the Punisher, Frank finds himself up against a soldier who’s more like him than either of them realize. And when the Exchange targets the Punisher with some unique technology, things get loud.

Finally, Punisher clashes with Spider-Man and Daredevil in an epic chase across Manhattan for a mysterious treasure that could change all their lives! Forced to work with two Avengers, the Punisher makes a promise: “Trust no one hurt everyone.” The three heroes set their sights on a blitzkrieg takedown of New York crime, but who says they’re all working together?

I really enjoyed the first volume of Rucka’s Punisher series – it had everything many Marvel comics lack: darkness, grit, and a definitely adult storyline that made no attempt to appeal to all ages. It was brutal and arresting from the very first page. This second collection continues the story in fine style, but at the same time it didn’t feel quite as focused, for some reason. Nevertheless, if you’re a fan of the series, Rucka’s writing and Checchetto’s artwork, then this would be a worthy addition to your collection.

In this book, there is a massacre at a ski lodge, which is very stylised and extremely brutal. Punisher and his new accomplice have targeted the group meeting there, The Exchange. 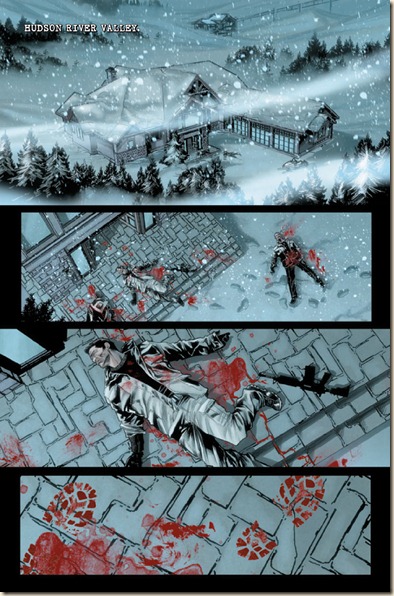 Careful what you step in…

They arrive separately and confront each other in a tense stand-off while surrounded by dead bodies and destruction. A truce is made, and they agree to work together, which ends up saving Frank’s life on a couple of occasions. 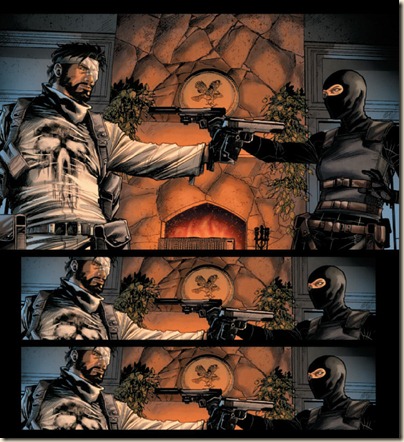 A large part of this book felt like a lead-up to the “Omega Effect”, the cross-over story that is also included in Daredevil Volume 3 (Daredevil’s story leads directly on from this, while Punisher’s leads directly up to the event, so I’ll post a review of Daredevil Volume 3 very soon – probably tomorrow, if not later tonight). That three-issue-story is pretty great, and it was certainly nice to see Punisher, Spider-Man and Daredevil’s differing styles merge (and clash) as they pursue the various factions of Megacrime.

I do think volume one was better. The story felt more focused and urgent, gritty. Part of my greater fondness for that book could also have a lot to do with it being my first Punisher read. Perhaps it is also a little because it was all drawn by Checchetto (I rank him easily among my favourite artists), but this is nevertheless still a pretty strong collection. The other artists also do a very fine job, and manage to keep a level of consistency for the story. Checchetto is just so good. Checchetto’s absence no doubt it because he was working on the Omega Effect issues, and the expectations that were no doubt placed on his shoulders for those three issues.

The story moves forward in a well-paced manner, but it didn’t have the fluid, urgent feel of the first collection. I will definitely pick up the third book, when it’s published later this year.

I feel like I’ve already written a fair bit about the Omega Effect mini-arc (here & here), so I’ll just say again in this post that I really enjoyed it, and it works very well when read in one go. The cross-over’s good, and it really sets up the next step in Daredevil’s story, if not really Punisher’s.

The Punisher Volume 2 is certainly a worthy addition to any fan’s collection, and I think it should meet their expectations. 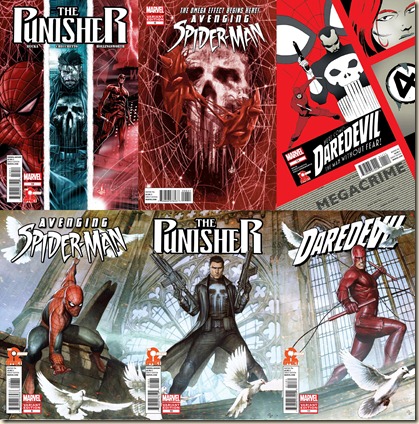 Posted by Civilian Reader at 12:46 AM