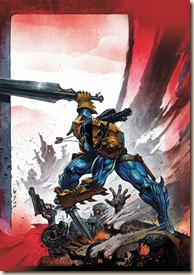 Slade Wilson once ranked as the world’s greatest mercenary. But when his reputation starts to slip, and when a mysterious briefcase enters the equation, the man known as Deathstroke decides to carve a bloody, gory swatch across the DCU in a quest to show the world what exactly makes him the best.

I first read a couple of Deathstroke issues when they were first published in the initial months of DC’s New 52 re-boot, and I found it… not bad. I couldn’t get too excited about the series, despite thinking it had potential. Given the cost of each issue, I had to drop it in favour of other titles. But, when I found a discounted copy of this book, I decided it was a good time to give it another try. I’m glad I did, but this doesn’t rank among my favourite of the New 52.

The first chapter gives readers a very good, quick introduction to Slade Wilson, the master assassin who also goes by “Deathstroke”. The chapter also sets up the book’s overall first arc, which I didn’t spot when reading #1-3 as single issues. 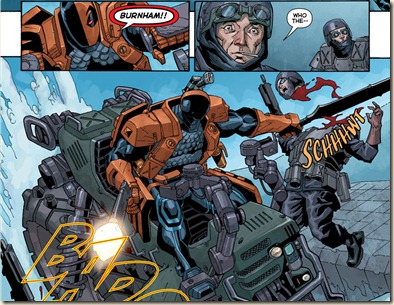 The second issue is really quite gratuitously violent, a phrase that could be used to describe a good amount of this book, actually. There are lots of decapitations, bisected heads, close-up brutality, and so forth (see the images above and below). The story of the book’s first few chapters establishes very clearly that Deathstroke is interested predominantly in making a statement of his continuing ability to complete the most difficult tasks. He wants to make every up-and-comer know that he is still the master assassin of the DCU. 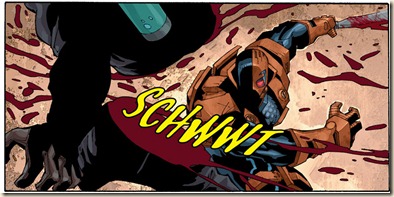 Deathstroke’s story grows into a tale about broken, dysfunctional families. Taken to extremes, of course. As it turns out, with regards to reading the single issues, I stopped just before things became really interesting. We learn of Deathstroke’s family, and in particular his son, who he thought was dead. I won’t say any more than that, but suffice it to say that it gets pretty good and moves away from just gratuitous violence, and starts exploring the layers of Slade’s life.

I think Deathstroke’s series certainly worked better as a collection than as single issues. The action is extravagant, the violence Tarantino-esque and over-the-top. I can see why people may have (like me) dropped it after a couple of issues, as it didn’t seem to have as much depth or focus on story as many of the other New 52 titles – a surprise, given Higgins’s work on Batman: Gates of Gotham, which was very, very good.

The artwork is good and strong throughout, eye-catching and vibrantly coloured, although there were a few panels sprinkled here and there that looked a little strange (sometimes characters’ poses during combat or, specifically Slade sparring, just looked wrong). 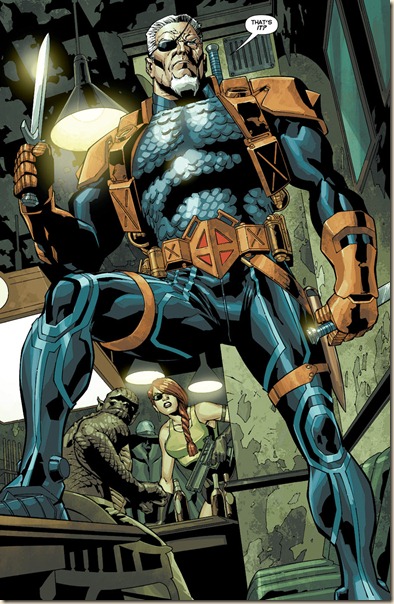 This is an interesting series, overall – it’s not one of the best, but by no means is it one of the worst, either. Deathstroke does, however, appear to have just been axed. This is a pity, but also not a terrible thing – it looks like Deathstroke will appear in one of the New 52’s third wave titles, Team 7 (although, I have no idea how frequently he’ll feature, or really what the premise of the series is other than some flashbacks to pre-New 52 continuity).

If you’re after some brutal, extravagant action, then Deathstroke will certainly appeal and suit your needs. 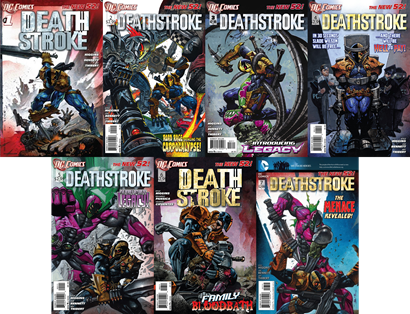