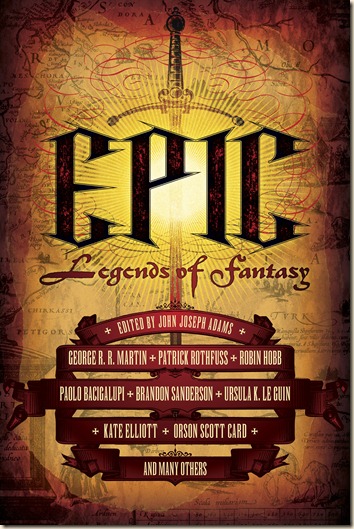 I almost gave this post a rather grand title along the lines of “The Most Important Introduction to Fantasy?” I decided to let my British reserve win out, but I think Epic could well be the best thing to happen to Fantasy newbies for a long time. It’s an anthology that, quite obviously, takes Epic Fantasy as its premise, and editor Joseph John Adams has drawn together a quite spectacular roster of new and established authors.

Just take a look at this table of contents…

“The Word of Unbinding” by Ursula K. Le Guin

"The Burning Man” by Tad Williams

“As the Wheel Turns” by Aliette de Bodard

“The Alchemist” by Paolo Bacigalupi

“The Road to Levinshir” by Patrick Rothfuss

“While the Gods Laugh” by Michael Moorcock

“Mother of All Russiya” by Melanie Rawn

“Riding the Shore of the River of Death” by Kate Elliott

“The Narcomancer” by N.K. Jemisin

“The Mad Apprentice” by Trudi Canavan

Despite the fact that I run and write a pretty fantasy-heavy book review blog, I have relatively little experience with Epic Fantasy and the Fantasy genre at large. I’ve said quite frequently on the blog and elsewhere that I’m quite new to the genre myself, having only really fallen down the rabbit hole in 2008. As a result, I have a lot of catching up to do. This anthology seems to be a great opportunity to do so, bringing together some titans of the genre (e.g. Hobb, le Guin, Martin, Moorcock, Card) and some of the most exciting new authors currently making a stir in the SFF genres (e.g. Bacigalupi, de Bodard, Rothfuss, Jemisin).

I’m not sure when I’m going to be able to get the whole book read, so I may offer up bite-size reviews of individual stories as-and-when I read them (or when Alyssa reads them, as she’s expressed some interest in this book as well). Nevertheless, I think this could be a great anthology for new and old fans alike.

There is a sickness in the land. Prophets tell of the fall of empires, the rise of champions. Great beasts stir in vaults beneath the hills, beneath the waves. Armies mass. Gods walk. The world will be torn asunder…

Epic fantasy is storytelling at its biggest and best. From the creation myths and quest sagas of ancient times to the mega-popular fantasy novels of today, these are the stories that express our greatest hopes and fears, that create worlds so rich we long to return to them again and again, and that inspire us with their timeless values of courage and friendship in the face of ultimate evil — tales that transport us to the most ancient realms, and show us the most noble sacrifices, the most astonishing wonders.

Return again to lands you’ve loved, or visit magical new worlds. Victory against the coming darkness is never certain, but one thing’s for sure — your adventure will be epic.

Epic is published in November 2012, and will be available in trade paperback and e-formats.

Posted by Civilian Reader at 3:46 AM