Following less than a year after the (admittedly successful) Night of the Owls Batman series event, DC Comics is unrolling yet another – and this one’s even bigger. It is, however, the return of the Joker, so it will undoubtedly be pretty epic (especially considering what happened to the psycho at the start of the New 52). Here’s what Scott Snyder told LA Times’ Hero Complex, when asked about the Joker’s relevance to the series:

“To me, he’s the greatest villain of all time, because what he does is he forces us more than any other villain in comics, and any villain I can think of in really any medium, to look at our own worst fears about ourselves. So that’s the power he has over his enemies, is that he looks at you with these very cold eyes, and he sees the things you’re most afraid of in yourself, the things you’re most afraid are true about yourself, and then he gleefully brings those things to life and makes a case as to why those things are the total of who you are, and why you’re no good. You know, we’re only as good as our villains.”

I’m not sure that all fans will be particularly happy with the extent of the series, and there will be inevitable moaning about “having to buy so many extra/more issues/comics”. Well, that’s true, if you must have all the issues. I’m sure (at least, I hope) the overall story will be written in such a way that it won’t be absolutely necessary to read every single one of the issues. I’ve included the publishing schedule below – although, the cover images available and included below may contain minor spoilers.

(Images of the Joker leaked months ago, much to the chagrin of Snyder and Capullo, so I figured because they were already out there – and also on DC’s website – it wouldn’t be a problem to include them in this post.) 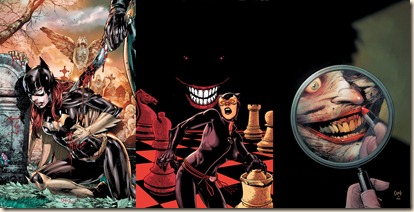 BATGIRL #13 (Prelude to Death of the Family)

CATWOMAN #13 (Prelude to Death of the Family)

RED HOOD AND THE OUTLAWS #15

RED HOOD AND THE OUTLAWS #16

Cover images & details for January and February releases are not yet available on DC’s website.

So… a pretty long, involved story. I have no doubt that Snyder and Co. can pull it off. What do you all think of this type of Event? Will you buy/follow it? Could this be too long? Should they be kept in-series?

Waiting for the collected book will also give me the opportunity to read A Death in the Family, the 1988-9 story in which the Joker bludgeons then-Robin Jason Todd to death with a crow-bar. (I only discovered in the above-linked Hero Complex article that Jason’s death was voted for by “fans”

A Death in the Family was re-released late last year, and is only one of many pre-New 52 Batman storylines I’m eager to read and catch up with. 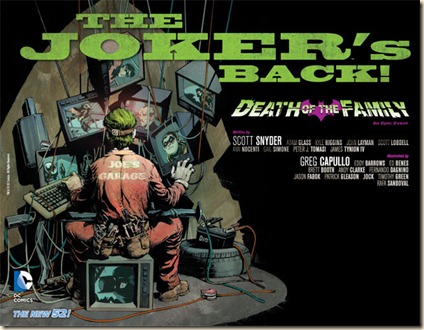 Posted by Civilian Reader at 5:36 AM