Hurrah! The totally excellent Simon Pegg and Nick Frost have a new movie coming out (relatively) soon! Here’s the synopsis for The World’s End, from IMdB:

20 years after attempting an epic pub crawl, five childhood friends reunite when one of them becomes hell bent on trying the drinking marathon again. They are convinced to stage an encore by mate Gary King, a 40-year old man trapped at the cigarette end of his teens, who drags his reluctant pals to their home town and once again attempts to reach the fabled pub, The World’s End. As they attempt to reconcile the past and present, they realize the real struggle is for the future, not just theirs but humankind's. Reaching The World’s End is the least of their worries.

The movie will be directed by Edgar Wright, and stars Pegg, Frost, Rosamund Pike, Martin Freeman, and Paddy Considine. So far – I assume there will be more people in it… And here’s the rather apocalyptic poster: 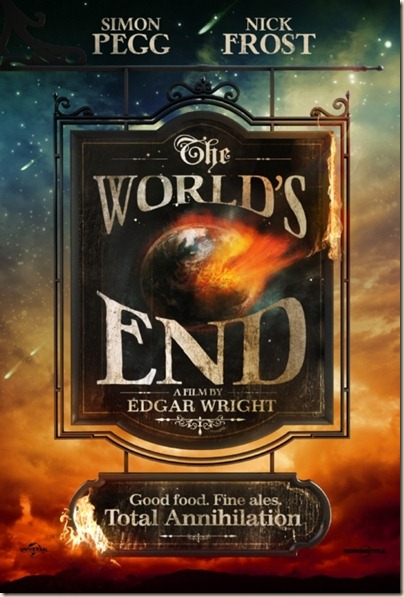 Digital Spy has an interview with Simon Pegg, with more information about the movie and his other projects, which can be found here. I’ve liked all of Pegg and Frost’s movies so far, and I can not wait to see this one as well. The World’s End is currently slated for an August 2013 UK release.

Posted by Civilian Reader at 3:36 AM