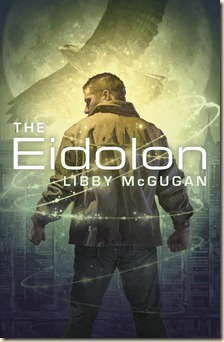 I stumbled across this book completely by accident, but it looked kind of interesting (which makes me wonder why it hasn’t been mentioned more often, elsewhere…). The Eidolon is Libby McGugan’s debut novel, and here is the synopsis:

When physicist Robert Strong loses his job at the Dark Matter research lab and his relationship falls apart, he returns home to Scotland. Then the dead start appearing to him, and Robert begins to question his own sanity.

Vincent Amos, an enigmatic businessman, arrives and recruits Robert to sabotage CERN’S Large Hadron Collider, convincing him the next step in the collider’s research will bring about disaster. Everything Robert once understood about reality, and the boundaries between life and death, is about to change forever. And the biggest change will be to Robert himself...

The Eidolon will be published by Solaris Books in October 2013.