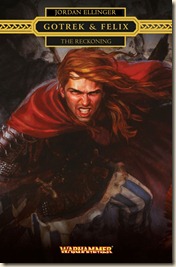 A Novella from the Upcoming Gotrek & Felix: Lost Tales

Gotrek and Felix: unsung heroes of the Empire, or nothing more than common thieves and murderers? The truth perhaps lies somewhere in between, and depends entirely upon whom you ask... Summoned back to Barak Varr by the outraged King Grundadrakk, the pair discover that a terrible crime has been committed – the dwarfen hold’s Book of Grudges has been stolen, right out of its sealed vault. Given that his own name appears upon its fading pages, Gotrek is honour-bound to join an expedition to recover the ancient tome. How far will the trail lead, and just what manner of individual would seek to rob the dwarfs of their vengeful legacy

I’m not a fan of buying novellas individually if they will be released later in a collected anthology, but when The Reckoning was released, I really fancied a short dip back into the Warhammer setting with my two favourite characters. And luckily, this story is really rather good.

To be honest, The Reckoning didn’t start too well, as the captain of the Dorabella was given a bit of a cliché accent. (The Dorabella is the ship on which our heroes are fleeing a mob intent on capturing them for… something they may or may not have done.) The story is set twenty years since the Window Tax Riots in Altdorf, the event that resulted in Gotrek and Felix’s first encounter – and, as can happen from time-to-time, after much alcohol resulted in Felix pledging to write Gotrek’s epic.

A group of heavily armoured Dwarfs attack the Dorabella, board it and apprehend our much-put-upon heroes. Apparently, Gotrek committed a crime before leaving Barak Varr (which he visited on his way to the Slayer Shrine to make his oath).

The best thing about this novella is the amount of detail it adds to Gotrek’s back-story. We learn a little more of his life pre-slayerdom. For example, I don’t remember knowing before this that he was a master engineer (it’s entirely possible I just forgot – there have been quite a lot of novels, now…).

“Where are we going?”

Gotrek’s single eye glittered. “To Barak Varr. I want to see for myself how these fools let someone into my vault.”

After examining the vault, Gotrek, Felix and their Dwarven captors recognise that there’s something else entirely going on, and so they descend into the tunnels below Barak Varr. As is so often the case with Gotrek and Felix, they are in pursuit of the mischievous and malicious Skaven, who have apparently stolen something very dear to the Dwarfs. We don’t really get to know the new dwarf characters as well as I would have liked, but it is by no means much of a problem – the action comes fast and often, and the story moves along at a good clip. The Skaven they are after are also an interesting, 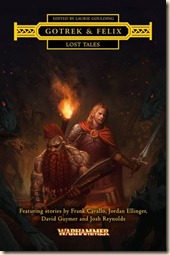 unique bunch, and I think Ellinger’s done a great job writing a new spin on the neverending war between the rat-kin and Dwarfs. (I won’t spoil what it is, but it’s well-written and executed.)

The Reckoning reminded me of the early Gotrek & Felix short stories, and particularly those found in Trollslayer. The atmosphere, the tight prose, and the sword-axe-and-sorcery fun. It was, therefore, very enjoyable and a most welcome addition to the series.

Overall, then, this is a really good novella, and I’m now really looking forward to reading the other three in Gotrek & Felix: The Lost Tales, which will be published in August 2013. I really don’t know why I’m still taking so long to read Josh Reynolds’s Gotrek & Felix: Road of Skulls novel… (Soon!)