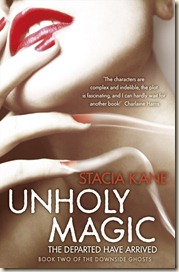 Enemies don’t need to be alive to be deadly

For Chess Putnam, finding herself near-fatally poisoned by a con psychic and then stopping a murderous ghost is just another day on the job.

As an agent of the Church of Real Truth, Chess must expose those looking to profit from the world’s unpleasant little poltergeist problem – humans filing false claims of hauntings – all while staving off any undead who really are looking for a kill.

But Chess has been extra busy these days, coping with a new “celebrity” assignment while trying on her own time to help some desperate prostitutes. Someone’s taking out the hookers of Downside in the most gruesome way, and Chess is sure the rumors that it’s the work of a ghost are way off base. But proving herself right means walking in the path of a maniac, not to mention standing between the two men in her life just as they – along with their ruthless employers – are moving closer to a catastrophic showdown. Someone is dealing in murder, sex, and the supernatural, and once again Chess finds herself right in the crossfire.

Not to long ago, I read the first book in Stacia Kane’s Downside Ghosts series, Unholy Ghosts. I thought it marked the beginning of an interesting, original and well-written Urban Fantasy series. Unholy Magic brings us more of the same, which is certainly no bad thing. While flawed, this is still an entertaining, quick read.

The novel starts off with Chess infiltrating and illegal séance, which doesn’t exactly go as planned. It’s a good introduction, and allows for a little more world-building. Not to mention a very good explanation of what ghosts are in this reality (just in case a new reader has started here, I suppose, but it’s also a good reminder for returning fans):

Once again, Chess has been assigned a special case by the Church: a famous TV star and comedian’s McMansion is apparently haunted by a whole host of angry specters, and the Church would very much like her to get to the bottom of things. Especially since the ghosts seem to be getting angrier and more malevolent as time passes. It’s an interesting case, because unlike many other potential hoaxes, the celebrity has no financial reason to try to scam the Church.

In the meantime, Chess’s one-time number-one drug dealer, Bump, is having a spot of ghost trouble as well. Teamed up again with Bump’s enforcer, Terrible, Chess investigates the site of a grisly murder, the distinct marking on the dead prostitute pointing to a much older case. To make things even worse, Chess’s sort-of-lover Lex, who is also a member of a rival gang, tells her that they’re experiencing a similar problem in their own territory and with their own whores. This puts her in a very delicate situation which, as the novel progresses, we realise she is not wholly prepared to handle properly.

Unholy Magic follows a similar structure to Unholy Ghosts: a few similar narrative tricks and methods are used at similar points during the novel, for example. But, instead of making this feel like we’re just reading the same novel with different names, it gave the setting a familiar, comfortable feel – not unlike that you’d find from a much-longer established series, or perhaps a thriller series. The two seemingly-unconnected cases tick over while we also get to see more of Chess’s life – the delicate balancing of professional responsibilities and side-jobs, not to mention her “handling” of her worsening substance abuse. Unholy Magic builds to a nice, big and explosive climax, too, as Chess and some allies storm a ghost bordello (really). 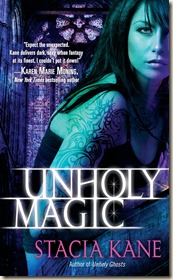 This novel seems to focus even more on her addictions (there does not appear to be any drug or stimulant she is unwilling to use frequently). Her predicament is best highlighted during a particularly brutal withdrawal scene, after Chess is caught by a blizzard at the star’s home without her stash and forced to stay overnight. When you add in the (potential) ghosts sightings while she’s there – feverish, in pain, and going mad – you can perhaps imagine how much of a nightmare this is for her. Our heroine is seriously spiraling out of control. Her addictions aren’t portrayed in a preachy manner, but there’s no denying the “lesson” here, given how bluntly and plainly it’s written. It certainly makes Chess an unusual protagonist, and I like the added “grittiness” (for want of a better word) that her illness gives her. Kane’s done a great job of incorporating this into the novels, and the considerations Chess must make – to keep her addictions secret, as well as to maintain her substance abuse – and the lengths she’s willing to go to are well-written.

“It would have been better if she’d been able to squeeze out a tear, but the Cepts she’d taken didn’t allow it. It was hard enough to feel emotions when she was high, let alone emotions intense enough to make her weep. Hell, that was one reason why she kept taking the fucking things, wasn’t it?”

As in Unholy Ghosts, Terrible is one of my favourite characters. In this novel, he acts as Chess’s conscience on a number of occasions, and there are developments in their friendship. Not all of them good – he gets are beating in this novel: emotionally, most of all, but he doesn’t come out physically unscathed by the end of the novel, either…

Overall, this was a good follow up to Unholy Ghosts. Chess’s drug abuse and the romantic/sexual elements of the story were more prominent, as the antagonist has been using a particularly sinister and deviant form of sex-magic in their evil shenanigans. The magic is wild and invasive, and Chess’s reaction to it is visceral and horrible (sensitive as she is to it as a result of the magic Church tattoos that cover her torso):

“Oh, fuck…Sex roared over her skin, immolating her like a corpse in a crematory oven, reducing her to nothing in a second. She barely existed; her body jerked in a painful, hideous, hateful orgasm she didn’t want, couldn’t control. And she was back in bed, fourteen years old, hating what they were doing to her, hating herself because she couldn’t help liking it, too, and shame washed through her like a red ocean full of dirty needles and broken glass tearing her skin from her bones. Her throat went raw but she kept screaming. Her tattoos seared like fresh brands. She was sinking, falling…”

It did sometimes feel like the actual supernatural investigation and the weird-goings-on were peripheral to the romantic elements; or as though Chess’s investigations were just a framework within which Kane could paint a picture of a seriously messed up drug addict – one who is slowly but surely ruining her personal life (not to mention her psyche) by perpetuating a punishing cycle of addiction, abuse and degradation (she sleeps with a lot of people just to escape, or because she’s simply too high to say no).

“When had being an addict gotten so fucking hard? So exhausting? It had been so easy for so long; she had a steady supply, she kept to herself, nobody bothered her. Now she was constantly up to her ears in intrigue and complications, being torn in every direction but her own, all thanks to her need for those pills.”

Unholy Magic is a quick-paced, interesting read. I wasn’t as impressed with it as I was with the first book, but by no means have I been convinced to not catch up with the rest of the series.

I still consider this a recommended series.