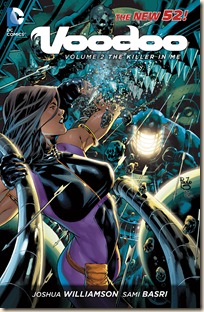 Black Razor Agent Fallon has finally tracked down Voodoo and has her cornered! Now it’s time for revenge. But Voodoo knows the truth of her own origins and will decide if she's going to be a hero – or a villain! Then, Pris is forced to confront exactly what she has become after being experimented on by the Daemonites. She’s offered a deal by the Black Razors... but wherever way she turns, it’s guaranteed more blood will be on her hands.

This book brings the Voodoo series to a close. Given the critical reaction at its start, I’m surprised it lasted as long as it did. I liked the ideas the series included, and it’s a pity it had to end. That being said, some of the chapters in this book felt like the series had been written off.

As the story begins, Pris has escaped from captivity, accompanied by Black Jack and Fallon. Voodoo is on the daemonite ship, facing their Council. She’s told the truth about herself, and the daemonite lord says she has to be captured and reprogrammed. She... disagrees with his assessment of the situation… 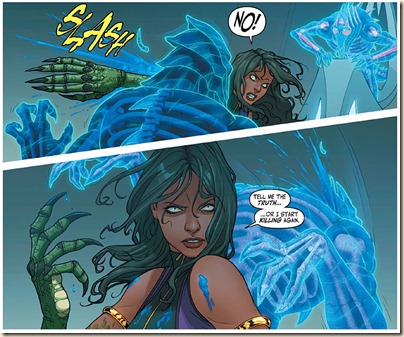 The two groups are on a collision course, and by the second chapter,  the shit really starts to hit the fan. The chapter (issue #8) was basically one long face-off between Voodoo, Pris and Fallon. All does not go well... Strangely, Pris is offered a job by a dude from the Blackhawks (a series I’ve only read one issue of, but also another that has been axed). 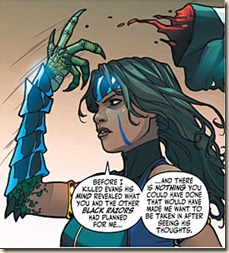 The rest of the story follows all the various threads of the series being tied up – some in not particularly satisfying manner (there’s some interstellar flight, too). As Pris and Voodoo are trained, almost in parallel, by different forces – Pris by the Blackhawks, Voodoo by Helspont. Pris also discovers that Voodoo worked as a stripper in order to remain below the radar. She is not happy.

In the final chapter, the Zero Issue, we see Priscilla Kitaen’s “birth” on the daemonite ship, before freaking out and fighting her way out. It ends with her being taken into custody by the Black Razors. Then we get Voodoo’s birth as well, as a loyal hybrid. And finally, we join Grifter as his life is saved by Voodoo. I’m not sure it works at all as a “#0”, because it ends on “Continued in Grifter”... Really it’s a series epilogue. It did make me want to catch up on Grifter, though (I’ve read up to #7). 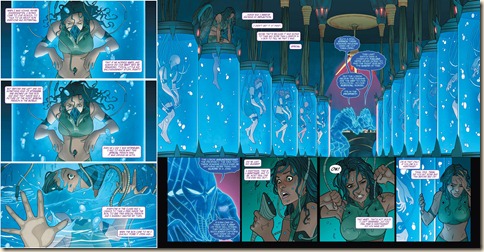 This series crosses over with so many: Superman, Stormwatch, and Grifter. Sometimes these crossovers can be fun or interesting, but when it happens too often, which certainly feels like the case recently (there have been a number of larger, cross-title story-arcs recently). Well, it gets both irritating and expensive… I’m not sure this needed to cross over quite so much. Cameos probably would have sufficed for many scenes and snippets of exposition.

Towards the end of the book, the writing felt a little rushed, but at least it never took itself too seriously. It has a ’80s/’90s action-SF-movie feel to it: it doesn’t all make sense, there are some narrative jumps, etc. The dialogue never quite manages Expendables-levels of cheesy awesome, but that was the vibe I got, sometimes. Not bad, overall, but it’s not too difficult to see why it was sent out to pasture. For the story to really work, it would have required more time and space to properly grow. I think most people will see this was on the outs from early on in this book.

I do like the artwork a lot, though. There are so many nice little details in each issue. I really hope the team are hired on for more of another series. 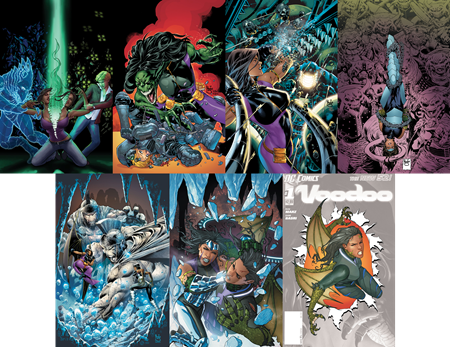