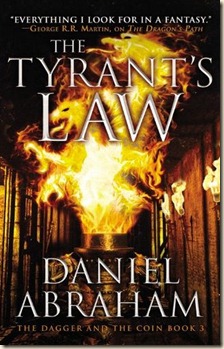 Dan Abraham is one of my favourite authors. Despite the very odd (and annoying) fact that his books are so often books I Save For Later… Anyway, The Tyrant’s Law is the third book in Abraham’s current fantasy series, The Dagger & the Coin, which began with the excellent The Dragon’s Path and was followed by the as-yet-unread-by-me The King’s Blood.

The great war cannot be stopped.

The tyrant Geder Palliako had led his nation to war, but every victory has called forth another conflict. Now the greater war spreads out before him, and he is bent on bringing peace. No matter how many people he has to kill to do it.

Cithrin bel Sarcour, rogue banker of the Medean Bank, has returned to the fold. Her apprenticeship has placed her in the path of war, but the greater dangers are the ones in her past and in her soul.

Widowed and disgraced at the heart of the Empire, Clara Kalliam has become a loyal traitor, defending her nation against itself. And in the shadows of the world, Captain Marcus Wester tracks an ancient secret that will change the war in ways not even he can forsee.

The Tryant’s Law will be published in the US and UK by Orbit, in May 2013.