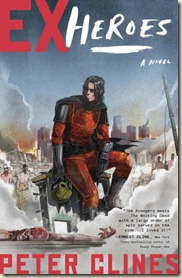 Ok, technically, this isn’t actually an “Upcoming” novel (it was published at the very end of February). It was self-published by Clines a while ago, but has recently been picked up by a traditional publisher. It sounds pretty interesting, and I really must get around to reading it (I’ve had a copy on my Kindle for quite a while…).

Now, a year later, the Mighty Dragon and his companions protect a last few thousand survivors in their film-studio-turned-fortress, the Mount. Scarred and traumatized by the horrors they’ve endured, the heroes fight the armies of ravenous ex-humans at their citadel’s gates, lead teams out to scavenge for supplies — and struggle to be the symbols of strength and hope the survivors so desperately need.