Later this year, Orbit are publishing two more novels set in Michael Sullivan’s Riyria fantasy world. The two books are set before Theft of Swords and the Riyria Revelations series, but do not have to be read first – they fill in some details that are alluded to in the first series (which also includes Rise of Empire and Heir of Novron). 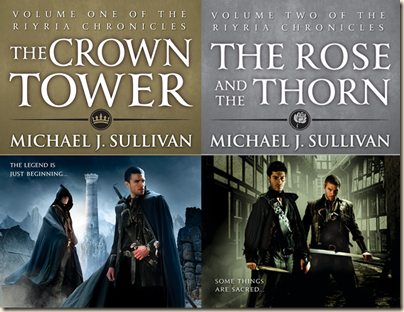 First up is The Crown Tower, which chronicles Royce and Hadrian’s first job together:

Two men who hate each other. One impossible mission. A Legend in the making.

A warrior with nothing to fight for is paired with a thieving assassin with nothing to lose. Together they must steal a treasure that no one can reach. The Crown Tower is the impregnable remains of the grandest fortress ever built and home to the realm’s most valuable possessions. But it isn’t gold or jewels the old wizard is after, and this prize can only be obtained by the combined talents of two remarkable men. Now if Arcadias can just keep Hadrian and Royce from killing each other, they just might succeed.

And secondly, The Rose and the Thorn, in which we see the soon-to-be-legendary “Riyria” starting to take shape:

For more than a year Royce Melborn has tried to forget Gwen DeLancy, the woman who saved him and his partner Hadrian Blackwater from certain death. Unable to get her out of his mind, the two thieves return to Medford but receive a very different reception – Gwen refuses to see them. The victim of abuse by a powerful noble, she suspects that Royce will ignore any danger in his desire for revenge. By turning the thieves away, Gwen hopes to once more protect them. What she doesn't realize is what the two are capable of – but she’s about to find out.

The Crown Tower will be published in August 2013, with The Rose and the Thorn following in September 2013. I’m really looking forward to these.

Riyria Revelations: The Viscount and the Witch, Theft of Swords, Rise of Empire, Heir of Novron