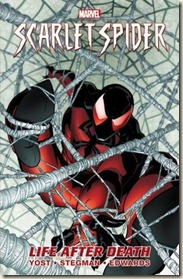 Spinning out of Spider-Island, The secrets of the Brand New Scarlet Spider revealed! Who is the new webbed wonder – and why has he come to face corruption in Houston, Texas?

I read a short Scarlet Spider story in a random Marvel Point One issue I picked up on Free Comic Book Day in 2012. I rather liked it, but have only just got around to trying out more of the series. And, I must say, I really enjoyed this. Definitely a series to check out if you want an edgier character in the Spider-Man universe.

At the start of this book, Kaine (who, for those not in the know, is a clone of Peter Parker) is in Houston, and he stumbles across a human trafficking operation. He deals with the criminals, but all of the people in the shipping container are dead. Except for one girl, who takes to the hospital. 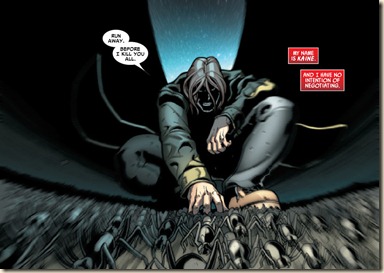 The first two chapters of the book deal with this case (some, big, flame-wreathed dude comes after the survivor… As can happen in super-hero circles…), and also Kaine’s introduction to Houston. We learn of his tendency to do good when all he wants to do is run away, to escape across the border and buy a beach or something (he doesn’t have everything sorted). I thoroughly enjoyed this intro, and I liked the clear differences that are developing between this series and any of the other Spider-Man titles I’ve tried thus far. And I think Houston’s going to be a cool location (being used to New York, it’s pretty funny when he runs out of skyscrapers, when webbing along…). In the third chapter and beyond we really start to see Kaine’s very different methodology to Peter Parker (see above – yes, he’s holding the perp by his face…). But, there are also some nice parallels between this series and the Spider-Man structure: for example, Kaine meets his own fiery red-head, Annabelle Adams, the barmaid of the hotel Kaine’s living in (remember the thing at the start, when he beat up some human traffickers? Yeah, well he “found” a lot of cash... Wonder if they’ll sustain this, and how...). I liked Annabelle immediately. She joins the group of people who know what he’s up to, including the doc from the hospital, Meland, and his husband (who’s a cop). It was pretty nice to see Kaine’s good side warring with his tendency to want to beat the crap out of people…

Oh, and to make things really awkward, the Guild of Assassins gets involved, as they’ve been chasing Kaine for quite some time. To begin with, I have no clue what was going on, but luckily, chapter four offers a brief catch-up that will give new readers everything they need. 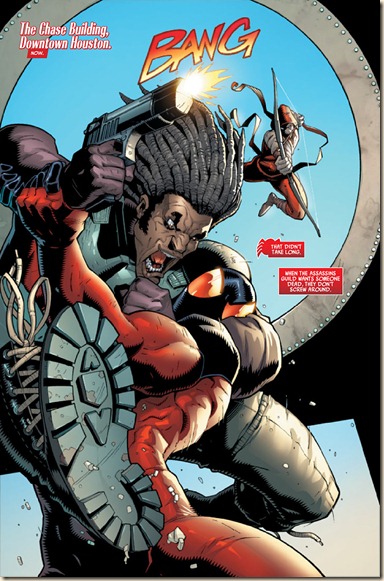 One thing that really stood out for me is the interesting set of powers Kaine has: razor-sharp claws (he shaves with them…), webs, but no Spidey-Sense, and a type of cloaking ability I didn't quite understand. Then in chapter five he has big fuck-off claws/spikes that extend out of his wrists… In the same chapter, we learn he can also talk to spiders... To find dirty bombs hidden in Houston… Silly, but very awesome.

The final chapter doesn’t tie things up so much as give us hints for so much more cool stuff that is still to come in the series. 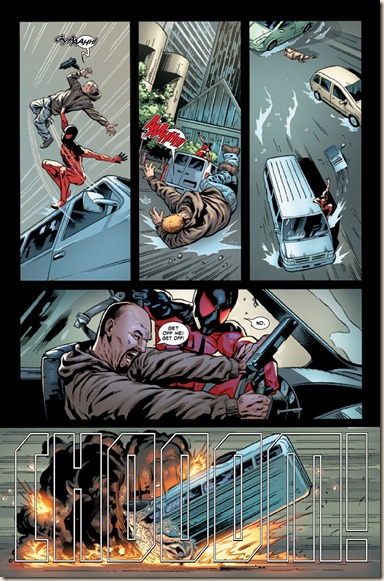 Ultimately, despite this not being my most in-depth review, I really enjoyed this book. There’s lots of action, the creation of a new setting (for the character/genre – Houston’s obviously real… No, really!), Yost injects a good and dry humour (sometimes rather dark), and there’s a lot of solid story. Throughout, the artwork’s sharp, with only a couple of strange panels or character contortions.

Scarlet Spider is definitely recommended. As soon as the next few issues are cheaper on comiXology, I’ll be picking up more of this series. (What? I’m a geek on a budget!) I’m also going to try out Venom next, as I continue exploring the extended Spidey-world… 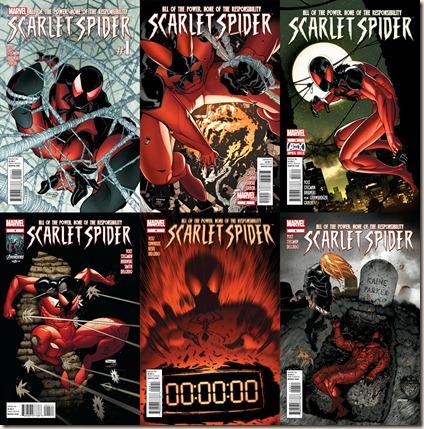 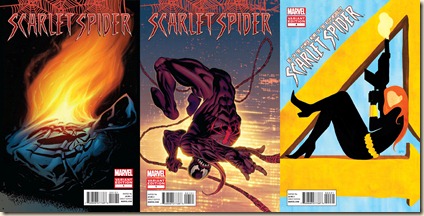