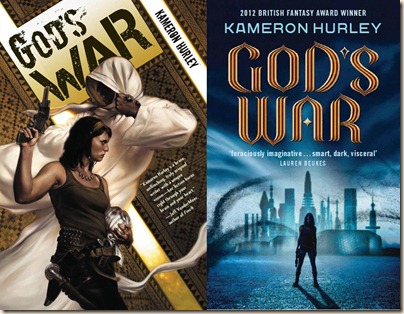 The start of a new, unconventional SF trilogy

Nyx had already been to hell. One prayer more or less wouldn’t make any difference...

On a ravaged, contaminated world, a centuries-old holy war rages, fought by a bloody mix of mercenaries, magicians, and conscripted soldiers. Though the origins of the war are shady and complex, there's one thing everybody agrees on...

There’s not a chance in hell of ending it.

Nyx is a former government assassin who makes a living cutting off heads for cash. But when a dubious deal between her government and an alien gene pirate goes bad, Nyx’s ugly past makes her the top pick for a covert recovery. The head they want her to bring home could end the war – but at what price?

The world is about to find out.

This is an unconventional, highly original and enjoyable debut sci-fi novel. I took my sweet time getting to it, for reasons I cannot fathom, but since its release in 2010 it’s received a lot of positive coverage from around the blogosphere. And now I know why. It’s not going to be to everyone’s taste, but it’s tightly written, well-constructed (for the most part), and… well, bonkers. I enjoyed this.

It also has one of the greatest, make-you-sit-up-and-take-note first sentences: “Nyx sold her womb somewhere between Punjai and Faleen, on the edge of the desert.”

The short Part One is a rapid-fire, near-riotous introduction to Nasheenian society and our main protagonist, Nyx. She is a somewhat troublesome, sometime rogue “bel dame” (a sanctioned bounty hunter and enforcer, I suppose). She’s been doing work on the side, which she really shouldn’t, and her sisters do not take kindly to this. We get a few hints of her past, but not too many until very near the end. She is caught, punished and imprisoned. Then we jump forward about seven years, and Nyx has moved on from her bel dame past and is working as a bounty hunter with a motley crew of violent and eccentric misfits.

The story is pretty grim, overall. The two main nations featured are at war with each other, and have been for quite some time. The two sides are constantly experimenting with new and innovative ways of causing mass-murder, often utilising the novel’s greatest creating: the bug-related bio-tech. (This is why the term “bugpunk” has been coined, and you’ll quickly see how suitable it is.) Nyx can be brutal (emotionally and physically) to those close to her. She’s reckless, cavalier, and self-destructive. Rhys, her pet magician (and the second ‘main’ character), is long-suffering, but they have a really interesting dynamic. They embody everything about each other’s culture that they don’t like, and yet they are drawn to each other nevertheless, and have created a mutually beneficial arrangement that seems to suit them both.

Hurley’s characters are pleasantly diverse, and I liked the imbalance towards more female characters. (Nasheenian society is matriarchal.) I enjoyed the way Hurley wrote them all, and I think she’s created a great society and world with which to keep writing in and for fans to keep reading (there are two more books in the series). Rasheeda, in particular, is creepy as all get out. And bonkers. The inclusion of shape-shifters was interesting, too (all that mucous must be a bit of a bitch, though…). The characters are interesting, three-dimensional and felt distinct from each other. I particularly liked Nyx’s crew, who created a dysfunctional family to follow. Rhys was a great character, and I liked all of his P.O.V. chapters. He’s a good lens through which we learn of the Nasheenian matriarchal society and the differences between that and his own, highly conservative Chenjan culture.

Bugs! Let’s get back to the bugs for a moment. They are everywhere and in almost everything: medicine (needles have eyes, because they seem to be specially engineered creatures), magicians control them for various means (healing, torture, light, espionage, security and surveillance, communications, etc.), and even some weapons have biological components. “Bio-tech”, in other words, on this world, is really “bug-tech”. Maybe my favourite things about this were the “bakkies”, which seem to be semi-organic (at least) buggies or cars. It’s all very weird, but detailed and very well-devised and realised on the page. Hurley never delves too deeply into how it all works – she gives us just enough to know what to picture, and then gets on with the story. Once the book ended, though, I felt like I had a pretty clear picture of how it all worked and fit together. Very cool.

Elements from early on in the novel are tied up quite nicely by the end (there’s a nice circle to the narrative). As a first novel, there is of course a lot of world-building going on, almost all of it very good and often fascinating, intricate. This can sometimes feel like it’s taking over the story, however: relegating the bounty hunt (or “note”, as it’s referred to on this world) to a near-peripheral status. I didn’t mind so much, as I enjoy reading about the world and its various societies. That being said, there were definite times when I had to remind myself that there was a narrative running through this, and it wasn’t just an exercise in imaginative social and cultural creation. This makes the end a little bit busy, in my opinion, although I will accept that I was distracted by the world-building, so I may have missed a couple of salient points from early on.

The writing is very good. I was willingly pulled on through the story, and read it relatively quickly.

Ultimately, I really enjoyed God’s War and, while flawed, I can certainly see how it has grabbed the attention of a number of discerning SFF fans. As I said, it’s unconventional, but it also draws from a lot of SFF traditions and plays around with almost all of them in new and interesting ways. Highly original, it really is about time God’s War was picked up by a UK publisher – which it now has been, by Del Rey UK (who are proving to have a pleasingly eclectic taste in titles).

Definitely recommended. I’ll be reading Infidel quite soon, followed shortly thereafter that by Rapture (both of which I already have from the US).