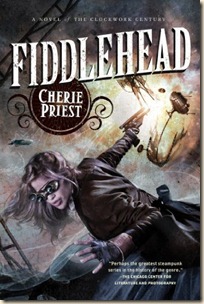 I have been slowly catching up with Cherie Priest’s popular Clockwork Century novels. I must admit I haven’t been as swept away as some readers, but they are starting to grow on me. Tor recently announced the fifth full-length novel in the series (there was also the novella, Clementine): Fiddlehead. The novel will be published in November 2013. Here’s the synopsis:

Ex-spy ‘Belle Boyd’ is retired – more or less. Retired from spying on the Confederacy anyway. Her short-lived marriage to a Union navy boy cast suspicion on those Southern loyalties, so her mid-forties found her unemployed, widowed and disgraced. Until her life-changing job offer from the staunchly Union Pinkerton Detective Agency.

When she’s required to assist Abraham Lincoln himself, she has to put any old loyalties firmly aside – for a man she spied against twenty years ago.Lincoln’s friend Gideon Bardsley, colleague and ex-slave, is targeted for assassination after the young inventor made a breakthrough. Fiddlehead, Bardsley’s calculating engine, has proved an extraordinary threat threatens the civilized world. Meaning now is not the time for conflict.

Now Bardsley and Fiddlehead are in great danger as forces conspire to keep this secret, the war moving and the money flowing. With spies from both camps gunning for her, can even the notorious Belle Boyd hold the war-hawks at bay?

I really must make an effort to catch up with this series. I’ve read and reviewed Boneshaker and the aforementioned Clementine, and will be sure to read the rest of the series soon: Dreadnought, Ganymede, The Inexplicables.